Is there a way to quantify a team's hustle? Combining several numbers can be very revealing.

Hustle and speed have been viewed as positives for as long as baseball has existed, with speed considered one of the five tools. It can be difficult to measure--does raw speed translate into success and at what point does baserunning acumen trump speed? These questions can be researched using data at Baseball-Reference that can be found by navigating to:

I used 2013 data for this table, with explanations to follow: 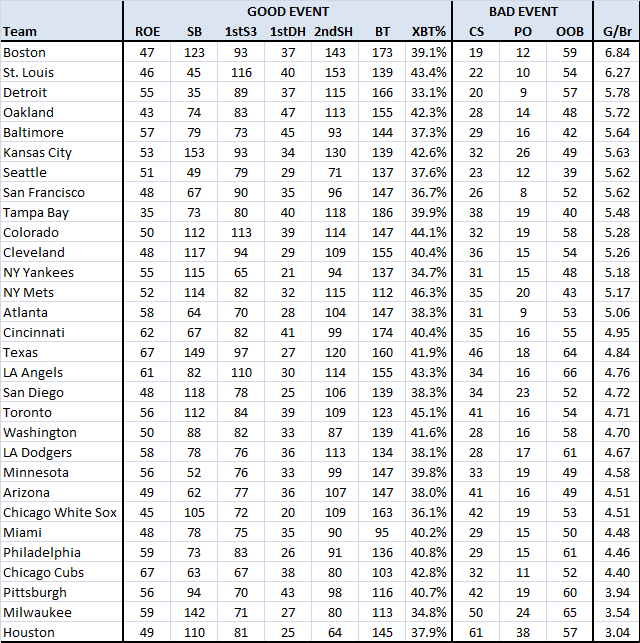 ROE=reached on error. If Jacoby Ellsbury hits a sharp grounder to Miguel Cabrera at 3rd and he bobbles the ball, there's a very real chance Ellsbury will be safe at 1st. If Paul Konerko hits that ball Cabrera has time to (eventually) field it, get a really good grip, wander into the stands for a beer and a hot dog, sign an autograph or two and still throw out Konerko by 15 feet. Sorting the B-R table by ROE shows fast players like Norichika Aoki and Elvis Andrus as well as players like Ian Kinsler and Andrelton Simmons, neither of which steal many bases.

BT, XBT%=extra bases taken on outs, wild pitches, passed balls, balks or defensive indifference. XBT% is the percent of times teams did this. Sorting the B-R page by BT shows it doesn't take pure speed to advance on the bases.

All these items Good Events. Bad Events are caught stealing (CS), pickoffs (PO) and thrown out on the bases (OOB). The last column creates the index that measures the good vs. the bad, the Good/Bad Ratio (G/Br).

It might be coincidental the two teams at the top played in the 2013 World Series and the teams at the bottom were among the dregs of baseball. The chart shows instances where teams were able to hustle and take advantage of other team's mistakes. In general, the more extra bases a team gains, especially if combined with fewer bases given away with mistakes, the more opportunities teams have to score runs. Like every other statistic it's not perfect and has anomalies like Kansas City and Seattle at the top and Pittsburgh at the bottom, but it lines up with common sense in that the more total bases the better the chance of scoring a run. Boston gained 616 extra bases through aggressive baserunning and lost only 90. This alone doesn't explain the Red Sox success of 2013 but it certainly played a role.

The distinction between speed and hustle becomes evident when looking at this table. Teams that led the majors in stolen bases, with exceptions like Boston and Texas, were not successful and finishing at the bottom like St. Louis or Detroit didn't guarantee failure. In the New Bill James Historical Baseball Abstract he suggested a stolen base was worth .20 runs but a caught stealing -.35 runs (p600). Tom Tango refined those values to .20 runs for a steal and -.384 runs for caught stealing (historical values can be seen here and don't fluctuate much). No matter which figure is used, caught stealing is almost twice as bad as stealing a base and is a topic I'll return to in a future post.

Baseball history is filled with players with raw speed and no baserunning sense--Herb Washington with 105 game appearances as a pinch runner in the 1970s and not one plate appearance, Matt Alexander with more pinch running appearances that plate appearances and others (see the most pinch running appearances here). Hustle isn't speed alone but the awareness of where the ball is hit, the strength of the fielder's arm and the status of the game. Cursory reviews of stolen base totals give an incomplete view of how effective teams are on the bases--the Hustle Index attempts to add nuance and allow comparisons between teams.

Scott Lindholm is a web columnist for 670 The Score in Chicago. You can follow him on Twitter at @ScottLindholm.