Is a Kevin Gausman breakout the key to the Orioles' ability to contend in 2014?

Late in 2013, I wrote an article about Alex Wood and how the Braves' quiet off season made sense. The Orioles' offseason, however, is a little different. As currently constructed, Baltimore's squad doesn't look like it will be able to compete with either Boston or Tampa Bay. Fans are getting restless, and I can't blame them.

Dave Cameron, of Fangraphs, summarized everything that the Orioles roster is at the moment a few weeks ago. The largest takeaway - at least for me - is below:

That's a perfect description of what the Orioles are. The combination of: Adam Jones, Manny Machado, J.J. Hardy, Chris Davis, and Matt Wieters are projected to be worth ~15 WAR, according to both ZiPS and Steamer. Other than those five players, the rest of the roster is somewhat dearth of significant talent.

The Orioles could still make a move in order to bolster their offense. They've been linked to Nelson Cruz, although he isn't quite as valuable as many fans think he is. Kendrys Morales could also be an option, but he's not significantly better than Cruz - in fact they're the same player in most ways.

The offense seems set; barring a move involving one of the two players involved above or a small move. There isn't a ton of offensive talent available on the free agent market. Unless, hello, Delmon Young?! We'll let sleeping dogs lie on that one.

The pitching market, on the other hand, is a little more fruitful. The impending arrival of Mashahiro Tanaka is drawing near, although he seems destined for New York or Los Angeles. Ervin Santana, Ubaldo Jimenez, and Matt Garza are still out there, but neither of them seem to be a match for Baltimore unless their price drops significantly. Enter Kevin Gausman.

Thanks to the early successes of Mike Trout, Bryce Harper, Manny Machado, Michael Wacha, and Gerrit Cole in recent years, we tend to forget about prospects if they don't make an immediate impact at the major league level. Gausman, after struggling during five starts at the major league level, pitched more effectively in the bullpen down the stretch, holding opposing batters to a .597 OPS in 14.2 innings (small sample size alert).

Gausman's issues aren't related to his stuff. He pumps mid to upper 90's gas with ease and enjoys a ~10 mph difference down to one variation his very good change-up. Gausman has always thrown a split-change which is usually clocked around 84 mph. Late last year though, he decided to add in a circle-change, which he is comfortable throwing between 88 and 90 mph. His slider is still a work in progress, according to most scouting reports, but significant progress over the past year has nearly turned the pitch into a plus offering.

Most of Gausman's issues in 2013 arose from his inability to keep the ball in the yard. During his 47.2 inning stint at the major league level in 2013, Gausman's HR/FB was an astounding 18.6%. Just a tad worse than the AL average of 10.9%. The main culprit for his homer issues - as it is for most - was location.

A well located fastball is arguably the best pitch in the game. When it's located poorly, it's far from it. Big league hitters can time absolutely anything, especially when it's over the heart of the plate. Gausman surrendered 8 home runs last season, six of which came off of his fourseam fastball. There was one home run hit off of his two seam offering and the final one was surrendered on a change-up. You'll notice a theme with the gopher balls, though. 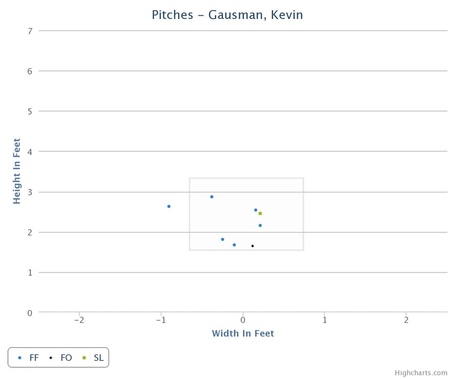 Four of the eight home runs surrendered by Gausman were up in the zone and over the middle. The other three, while down in the zone, were directly over the heart of the plate. The pitch well off the plate inside, was yanked over the left field wall by J.P. Arencibia.

Gausman's problems in 2013 came directly from his ability to command the baseball. He didn't have much of an issue getting the ball into the strike zone considering that his ~46% zone percentage is a few ticks better than the league average of ~44%. He was also above average at getting ahead - 61% f-strike percentage versus 59%. Free passes were also limited by Gausman. His 6.5% walk percentage is below the league average of 8%. Controlling his pitches wasn't the issue; commanding them - fastballs in particular - was. 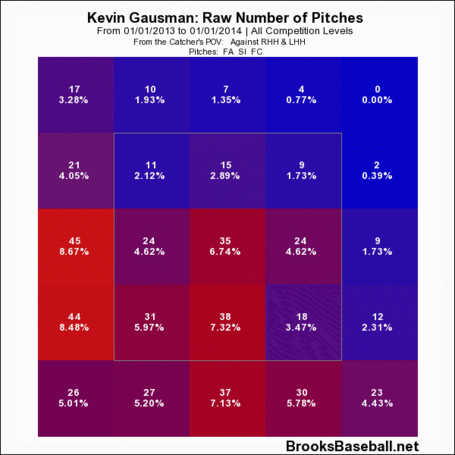 There's a fair amount of pitches right down the middle, although I was presently surprised at the lack of pitches in the upper third of the zone. 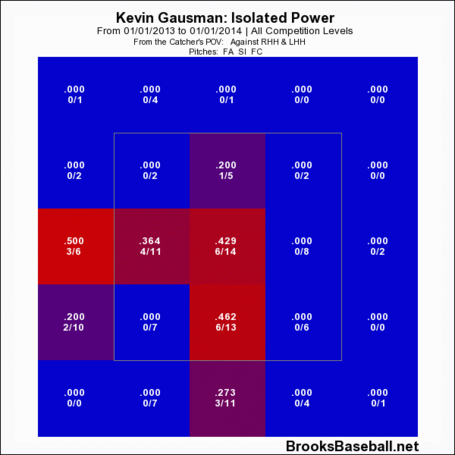 Isolated power takes awhile to stabilize, so a small size caveat is needed, but it's obvious that opposing hitters did not miss Gausman's hard stuff when it was in the zones it was most frequently in. Gausman's ability to be better at preventing runs in the future hinges almost directly on his ability to locate his fastball because he does a tremendous job of keeping his off-speed offerings out of harm's way. 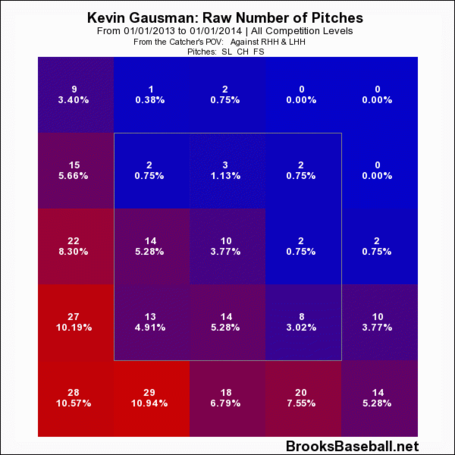 Gausman rarely throws any of his off-speed offerings in a zone where there can be punished. His change-up and splitter stand above all, generating whiff per swing rates of ~43% and ~53%, respectively. Both pitches are buried down in the zone and due to their movement and the change of speed they're very tough to do anything with.

The Orioles are likely going to be behind Tampa Bay and Boston, barring unforeseen circumstances. The Yankees, also look to be better on offense, although their rotation leaves much to be desired - unless they land one of the remaining free agent starters. Toronto should also be improved, health willing. So, where does the leave the Orioles in 2014?

Frankly, they're depending on large contributions from whomever is in left field - whether that is David Lough or Henry Urrutia - whomever mans second, and Kevin Gausman, who by all accounts should man the last rotation slot.

The Orioles position players, which as stated by Cameron above, is essentially stars and scrubs. Their rotation, on the other hand, is made up of adequate, good, but not great starters.

ZiPS isn't in love with the Orioles rotation. Neither are Steamer or Oliver. Gausman's projection seems completely doable. Steamer and Oliver actually project him to be a little better than the line above. Personally, I'm in the middle. I could see him blowing past his projections if he's able to command his fastballs better.

The Orioles roster is -- to put it lightly -- somewhat of a mess. They'll need a ton of things to break their way in order to contend in 2014. Among their in-house options, Gausman seems like the most important part of the equation. If he excels, contending will come much easier than handing over 20+ starts to the likes of Zach Britton and Liam Hendriks.

All statistics courtesy of FanGraphs, Baseball Savant, and Brooks Baseball.