At the end of the season Ervin Santana made waves exclaiming that he would like to sign for $100 Million this offseason. Unfortunately for Santana, the market for mid to high end starting pitching has been terribly quiet. The question is, what will the team that signs Santana actually get?

Ervin Santana has gotten no respect this offseason. Both ESPN (Keith Law) and MLBTradeRumors list Santana as their 6th best free agent this offseason. Santana though, has gotten precious little love during the winter. In fact, there have been just a few articles on MLBTradeRumors about Santana since he declined his Qualifying Offer. One of them was about how the Yankees won't pursue him even if they miss out on Masahiro Tanaka. Another indicated that the Cubs felt the same way.

Even among the big three domestic pitchers: Ubaldo Jimenez, Matt Garza, and Ervin Santana, the former Royals hurler gets little play. Below for example, is a google trends graph showing search volume over time. Santana (Blue) has an average of 19 (out of 100 on the search index) over the last 30 days. That compares poorly to Jimenez (Yellow, 30 Average) and Garza (Red, 47 Average). 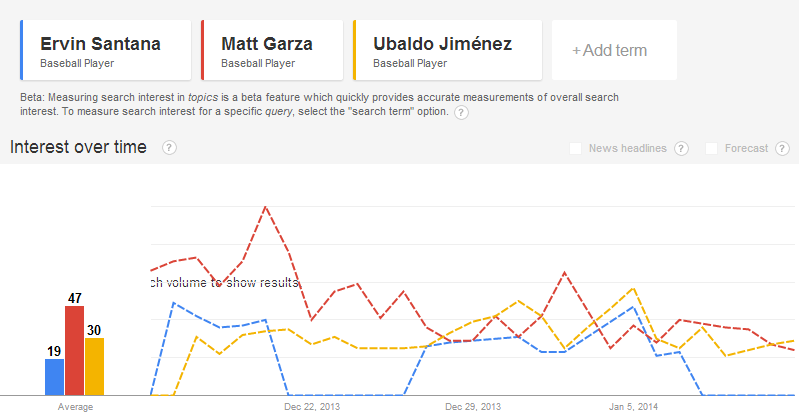 It's clear that Santana is a forgotten free agent at this point, especially with the free agent market as a whole being so slow. Eventually though, one team will end up signing Ervin Santana, and they will likely pay a lot of money for the right to trot him out to the mound every fifth day. So what will they end up getting?

Santana throws four pitches, a fourseam fastball (coming in at roughly 93 mph), a sinker (93 mph), a slider (84 mph), and finally a change up (87 mph). Over his career Santana was basically a two-pitch pitcher who had seen sporadic success as a starter. For his career Santana threw his fastball 53.19% of the time, and his slider 36.61% of the time. His sinker and change up come in at just over 5% each.

Last season however, Santana mixed his pitches better, throwing sinkers more than ever. In fact, the 727 sinkers he threw last year are roughly 68% of the sinkers he's thrown over his entire career. This proved to be an effective strategy as opposing hitters posted a triple slash line of .242/.282*/.326 against his sinker. Any team signing Santana would basically be hoping that he can continue to succeed based on his new pitch mix and approach. Last season Santana registered 3 WAR for Kansas City, posting a 3.24 ERA over 211 IP. While his FIP and xFIP suggest he wasn't quite that good, he showed more of the promise that he flashed in previous seasons.

The biggest difference, statistically for Santana from 2012 to 2013 is that his walk rate dropped by 0.90 BB/9 and his home run rate dropped by 0.86 HR/9. His ground ball rate went up to a respectable 46.2%, and his HR/FB rate dropped by 6.5%. Santana's strong 3.16 K/BB ratio was good for 35th best among qualified starters, and was a significant improvement over the year prior. The question is; how did he do it, and is it sustainable? 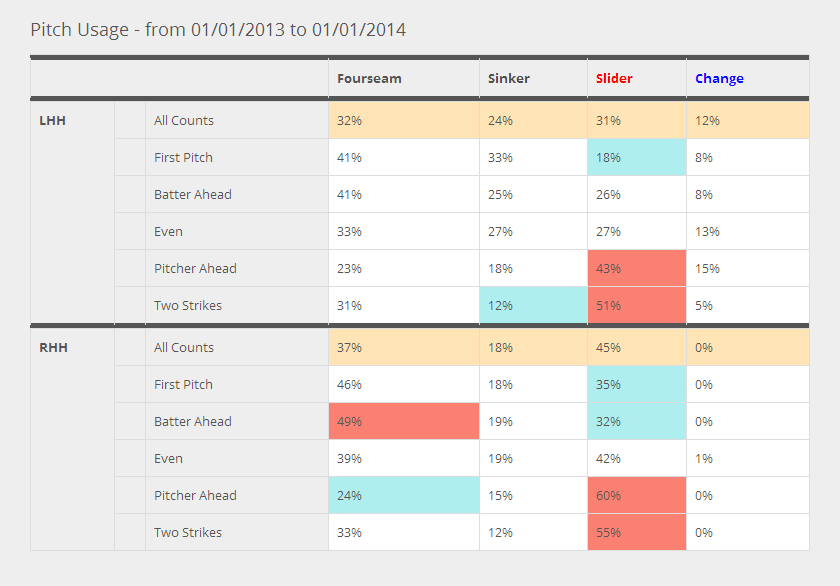 As you can see, Santana has a fairly steady approach to hitters, until he gets ahead of them. Then he often goes to his strikeout pitch: his slider. Against left-handed hitters Santana uses a four pitch mix, throwing his fastball, sinker, slider, and change up in varying quantities. Nearly 75% of the time he started the batter off with a fastball or sinker, most likely looking to get a first pitch strike. Against right-handed hitters that percentage drops to roughly 65%. The remaining 35% of the time he starts off right-handed batters with his wipeout slider, something he could be doing to keep hitters off balance.

Regardless, the strategy worked. Santana's 65.9% first-pitch strike percentage was 5.6% better than league average. Considering that Santana's slider gets a whiff almost 20% of the time, he seems to be making it a point to get strikes early in the count.

Additionally, Santana is more likely to throw his sinker early in the count, or if he falls behind the hitter. The hope here is likely that he can induce weak contact or ground balls, rather than allowing the hitter to drive the ball. If Santana gets ahead though, he begins using his slider at significantly increased rates, no matter the handedness of the batter. With two strikes, Santana throws sliders to lefties 51% of the time, and to righties 55% of the time. This makes sense when you consider that a whopping 40% of the swings against his slider are whiffs.

Another interesting note is Santana's approach to at-bats. He pounds the low and away portion of the zone with little regard for not mixing up his spots. Below are his zone profiles against right-handed batters and left-handed batters respectively: 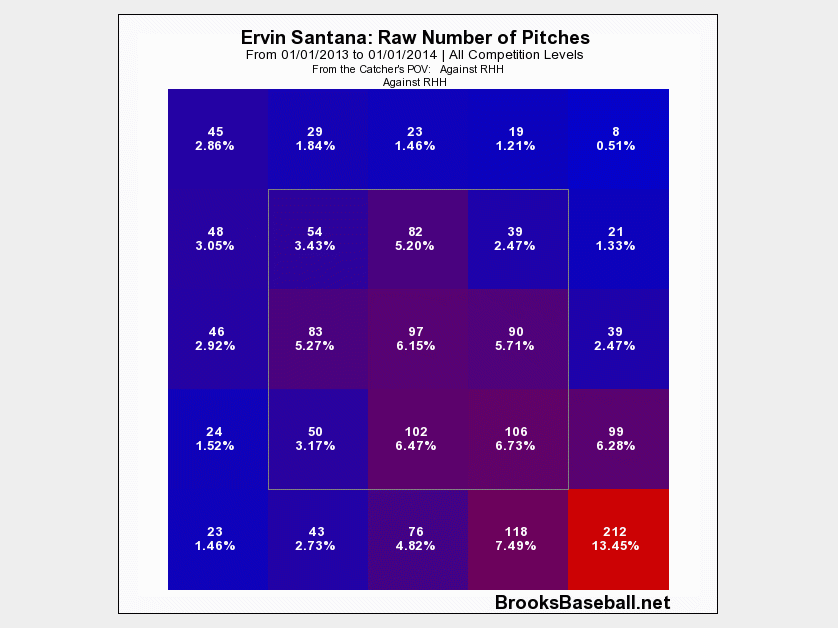 It's pretty clear that the batter can expect to be reaching for the ball as they step into the box as a righty against Ervin Santana. 33.95% of Santana's pitches end up in the bottom four zones on the right side of the zone, and three of those zones aren't even in the strike zone! For lefties, it's much of the same, though slightly more varied: 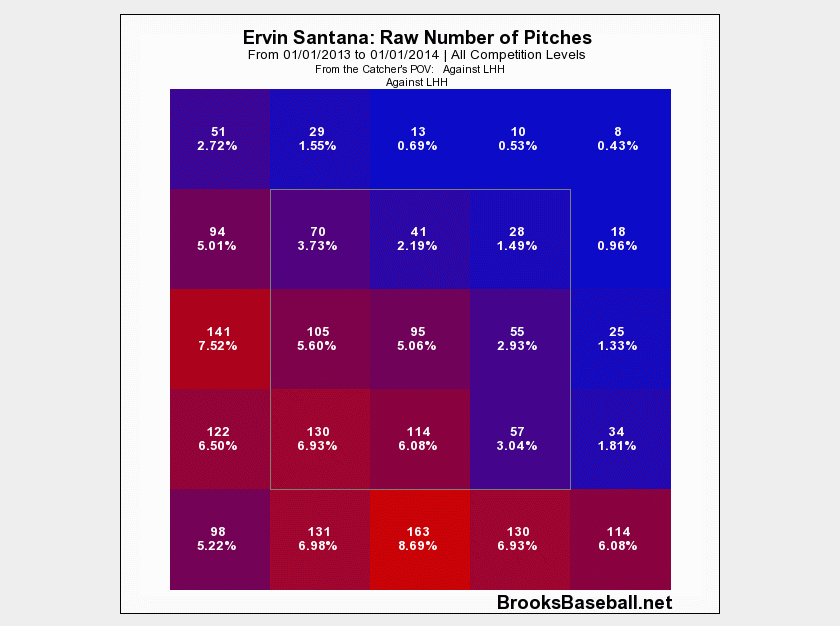 Here Santana works a little more toward the bottom and outside parts of the zone, but the general effect is much the same. He avoids the inside part of the plate like the plague, and generally tries to keep the batter reaching. Over the course of the season Santana seems to have honed his approach, though the results didn't necessarily improve as the season progressed.

The final thing that should look promising to Santana's new team is that his new approach seems to have minimized the platoon split issue that plagued him earlier in his career. For his career lefties had a wOBA of .336, more than .030 points higher than their right-handed counterparts (.305 wOBA). This past season however lefties and righties posted similar wOBAs of .296 and .291 respectively.

Part of this is because, while line drive rates have stayed roughly the same for his career, his ground ball rate jumped up and there was a corresponding decline in fly balls. For a guy who was home run prone for much of his career, this is a crucial development. For his career Santana had a GB/FB rate of 1.10 against lefties and 0.86 against righties. In 2013 however, those figures both rose to 1.45 GB/FB against lefties and 1.35 versus right-handed batters. Santana has his increased sinker usage to thank for this, as that pitch had a ground ball rate of over 57%!

It seems reasonable that Santana's new team can expect him to continue his ground ball tendencies, assuming he keep using his sinker. This is especially important against right-handed batters, as it gives him just enough of a different tool to compliment his fastball and slider. One could even argue that his performance has room for improvement if he mixed in an even greater percentage of sinkers. If Santana mixed in more sinkers, and maybe even matched his fastball usage, the results could be fantastic for whichever team ends up signing the oft-ignored pitcher.