The curious case of Rafael Palmeiro

The Hall of Fame Veterans Committee of 2050 is going to be extremely confused when presented with Rafael Palmeiro.

Share All sharing options for: The curious case of Rafael Palmeiro

There are plenty of story lines regarding the 2014 Hall of Fame voting. Greg Maddux, Tom Glavine and Frank Thomas were rightfully selected, Craig Biggio missed by 2 votes and Jack Morris wasn't selected in his last chance. In addition, Rafael Palmeiro will be dropped from future ballots after receiving 25 votes (4.4%), missing the 5% threshold. It's an interesting story worthy of a deeper look.

The era from 1990-2007 gives the Baseball Writers Association of America (BBWAA) great consternation. As I write this I'm listening to White Sox TV announcer Steve Stone on 670 The Score in Chicago stating that he believes no admitted steroid user should be admitted to the HOF. The story of Ken Gurnick not voting for Maddux already feels old but illustrates perfectly the capriciousness that can be attached to HOF voting. Suspicion lingers around Jeff Bagwell, Mike Piazza and others, with Manny Ramirez and Ivan Rodriguez mere years from their own exam.

One can play the Venn diagram game with any player who had a long enough career, and one including Palmeiro is the 500 HR/3,000 hit club, which is a very small club indeed. This table is something I cobbled together from data at Baseball-Reference and shows all players who hit 400+ home runs and their career runs created: 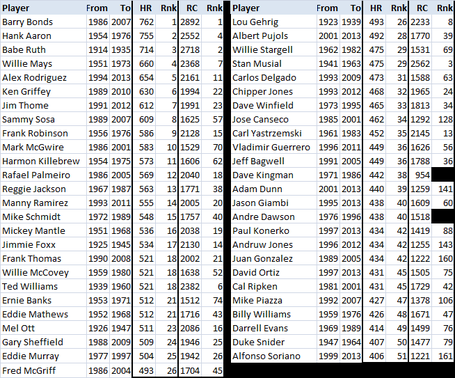 Runs created gets to the core of what a hitter is supposed to do. To explain, Barry Bonds is the all-time leader in home runs and runs created--no surprise. Stan Musial is 3rd in runs created despite hitting "only" 475 home runs, showing home runs in and of themselves don't necessarily determine value. Mark McGwire is the best illustration of this--10th in home runs, 70th in runs created, suggesting a level of one-dimensionality that I've never considered worthy of HOF induction.

Palmeiro is 12th in home runs, 18th in runs created. These are counting stats, numbers aided by having a long career, but when his runs created are normalized and turned into weighted runs created (wRC+), he drops to 180th or so with a value of 130, suggesting he was 30% better than his contemporaries and joined by players such as Carl Yastrzemski, Al Simmons and Bobby Abreu. The discussion will never end regarding the increase in offense during Palmeiro's era and how much it was inflated by any number of factors, and I'll admit I was beginning to wonder if former automatic qualifiers like 500 home runs or 3,000 hits were still rational. In other words, I was wondering if Palmeiro was worthy of HOF selection as long as 10 years or so ago.

Of course, that's not Palmeiro's primary issue. He is one of the few who actually admitted to using PEDs--this is directly from the Mitchell Commission report (p103 of the actual report, p152 of the pdf):

On August 1, 2005, Major League Baseball announced that Baltimore Orioles first baseman and designated hitter Rafael Palmeiro had violated the league's joint drug program and would be suspended for 10 games. Palmeiro subsequently acknowledged that he had tested positive for the anabolic steroid stanozolol, the generic name for Winstrol, but he repeatedly denied that he had ever "intentionally taken steroids.

Suspicion is one thing, admission entirely another. Couple this with a player widely regarded as good, really good, but not among the best of his generation, and it's an easy omission on any voter's ballot. He only had five seasons with a fWAR above 5, indicative of an All-Star caliber season and was in the top 10 in MVP voting just three times, in the top five (at 5th) once in 1999.

He has company. Mark McGwire only received 63 votes (11.0%) and Sammy Sosa 41 (7.2%), and there's absolutely no momentum to their selection. The 2015 ballot won't be any less crowded as Randy Johnson, Pedro Martinez, John Smoltz and Gary Sheffield all make their first appearances, making the elimination of McGwire and Sosa from the ballot a very real possibility. The Hall of Fame is already a very confusing place--we have inductees, first ballot inductees and then percentage of vote inductees, as well as players included by Veterans Committees that will do what it takes to induct certain pet players (Exhibit A: Ron Santo). It's not over for Palmeiro, it just is for now. His fate will be left to the Veteran's Committee or until the next rule change in HOF voting.

Scott Lindholm is a web columnist for 670 The Score in Chicago. You can follow him on Twitter at @ScottLindholm