A projection of the most efficient starting lineup for the perennially offseason-active Detroit Tigers through analysis of the projected starting eight's offensive production capabilities adjusted according to potential slotting in the batting order.

In my Lineup Efficiency series, I project clubs' most efficient starting lineups for the opening week of the upcoming season, incorporating current offseason acquisitions, through analysis of offensive production capabilities adjusted by placement in the lineup, while factoring in a minimum defensive effectiveness with regard to placement in the field.

After a pair of notable offensive acquisitions through trade and free agency, and the loss of two every day starters by the same means, Detroit's lineup will be minimally, yet substantially reshaped for the upcoming season. In acquiring second baseman Ian Kinsler from the Texas Rangers in a swap for first baseman Prince Fielder on November 20, Detroit no longer felt a need to retain free agent second baseman Omar Infante. Infante, who started 129 games at second for Detroit this past season, agreed to a four-year $30 million deal with Kansas City after the conclusion of the Orlando-based Winter Meetings. However, the club did secure a backup for Kinsler in Steve Lombardozzi in the trade that sent Doug Fister to Washington, and will have the pre-arbitration eligible utility infielder under club control for four years.

With notable offensive deficiency in the club's quasi-platoon of Andy Dirks (119 games), Matt Tuiasosopo (63 games), and Don Kelly (47 games) in left field, Detroit also moved in somewhat underwhelming fashion to sign free agent outfielder Rajai Davis (two years, $10 million) who spent the past season in Toronto. Although after moving Fielder to Texas it looked as if Detroit was primed to make a run for the off-season's premier free agent outfielder, the combination of Dirks and Davis in left provides a cheaper, yet still improved platoon alternative to the $130 million Choo who landed in Texas.

Detroit has been a perennial offensive powerhouse over the past four seasons, ranking 4th (of 30) clubs in batting average, 6th in wOBA, and 5th in oWAR and wRC+. Although under Jim Leyland the club was far from being known for its speed, the addition of Davis (who has swiped an average of nearly 44 bags per season over the past four years) and the takeover of Brad Ausmus at the helm should result in the club marginally increasing their use of speed on the bases. Last year's club was notoriously base-clogging, stealing only 35 bases (less than Davis himself and the fewest by a club since Oakland in 2005, 31), due partly to managing, and partly to having Miguel Cabrera (Grade 3 groin strain), Prince Fielder (put lightly: not the fleetest of foot), and Victor Martinez (2012 microfracture surgery, ACL reconstruction) spanning the heart of the order.

With Fielder dealt, Davis signed, and a new-era manager with National League experience taking control of the lineup, expect speed not only to be taken advantage of when Davis is on base, but also used where it has been under-utilized in seasons past - see: Jackson, Hunter, Iglesias.

In projecting the lineup for the upcoming year, it's necessary to first address the requisite defensive positioning of an everyday starting eight. The infield will see adjustment as eight-time All-Star and back-to-back American League Most Valuable Player Miguel Cabrera (side note: he has received MVP votes every year in his 11-year career) will move to first base with the departure of Fielder. Moving Cabrera to first will not only reduce the physical strain on his lower body, but also will allow prospect Nick Castellanos to break into the lineup at third base. Castellanos, MVP of the 2012 All-Star Futures Game, played in 11 games for the big club down the stretch this past season, and after steady progression through the Detroit system, appears ready for a starting role in April. Jose Iglesias, arguably a top-five defensive shortstop in the league, will begin his first full season in a Detroit uniform, while newly acquired Ian Kinsler will become the everyday second baseman.

Perhaps not receiving enough attention this offseason is Detroit's inactivity in the catcher free agent and trade market. Current starter Alex Avila was listed in injury reports five times over the past calendar year - suffering two reported concussions, a patellar tendon strain (left knee), a forearm contusion, and undergoing platelet-rich plasma injections in the same knee in the preceding offseason. After two stints on the 15-day DL, a series of helmet adjustments, and the departure of backup Brayan Pena (65 games played) to Cincinnati Reds in free agency, it begs the question whether the club is really going to enter a World Series contending season with the oft-injured Avila backed up only by rookie Bryan Holaday. Victor Martinez, while testing the waters behind the plate again in 2013, has not been able to catch regularly since 2010 with Boston (caught 3 games in 2013) due to knee problems of his own. 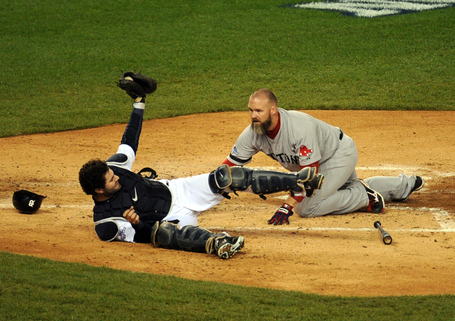 Simpler is the Detroit outfield, nearly unchanged from the past season, as Austin Jackson and Torii Hunter will remain in center and right respectively. With the addition of Davis, he and Dirks will comprise an upgraded platoon in left, likely splitting time depending on starting pitcher handedness. Dirks is a career .265 hitter against left-handed pitching (.321 wOBA), and Davis is a career .294 hitter against lefties (.343 wOBA) over a much larger sample size.

Turning to the lineup, the situation in Detroit is led by an issue to closely follow throughout the spring, as Austin Jackson's late season struggles in the leadoff spot led former manager Jim Leyland to drop Jackson back into the eight slot before Game 4 of the American League Championship Series. Although Jackson gathered six hits in nine ABs in the #8 and three hits in 33 ABs in the #1 last postseason, Jackson (unless he prefers otherwise) will be back atop the lineup on Opening Day this year. Despite probably too much being made about Jackson's struggles in the #1, he still got on-base more than the league average last year (.337), and has reduced his strikeout rate since his unsightly 27.1% in 2011 (21.0%, 2013).

The club's addition of Kinsler will allow the Detroit #1 through #5 to more efficiently be arranged than in years past. Jackson should ideally hit #1 because he provides the best combination of OBP and speed on the roster, and although ideally his strikeout rate will float closer to the league average and his wheels will be more adequately utilized, he remains the best fit to head the order. The club, and league's, best overall bat need not be named, and should be placed #4 in order for his presence in the batter's box to come with maximal runners on base. 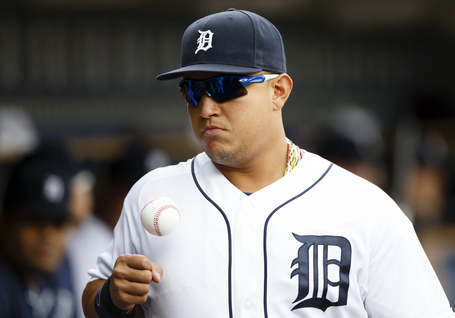 Although theoretically Detroit's second best hitter, and perhaps one of the league's most underrated, Victor Martinez should be slotted #2, because both he and Kinsler toted top-ten low qualifying strikeout rates (V.M. 9.3%, I.K. 9.6%) and have essentially equal OBP and bat control abilities, Kinsler's comparative speed necessarily slots him second. Martinez's diminished running ability (among the league's worst, think Molina) would negatively impact the ability of potent extra base threats that follow to drive in would-be runs. Especially in this lineup, a player more definitively able to go first to third, and second to home, should be slotted second as opposed to later in the order when offering supplementary high OBP/low K%. As a result, Martinez will hit #5, where he spent 150 games last season, and the lesser meaningful #3 will be filled by the going on 18-year veteran Torii Hunter.

Hunter is a perfect #3 hitter, who I personally revere for his aggressive outfield play. Although the 38-year-old may have lost a step since his nine consecutive Gold Gloves (most recently in 2009), Hunter remains a plus offensive player with - like most on Detroit's roster - under-utilized speed. Martinez should hit five as the slot provides a higher run expectation advantage than the #3 (except for pure sluggers), and Hunter's continued ability to get on base above the league average (career .334, 2013 .334) coupled with slightly diminished power makes him optimal to hit in front of the Triple Crown winner.


With the top five hitters on the roster locked in, the remaining spots should be filled with bats in order of decreasing ability, taking into account both the need to avoid grouping left-handed bats and keeping speed out of the #7 and #8. American League teams also have the blessing of not having to bat pitchers, and accordingly, there lies potential in batting the least productive #8 and a player who is not being unduly slotted low #9, but rather a young, volatile bat with both speed and a low weighted runs created in order to generate momentum in turning over the lineup. Although essentially statistically insignificant, the same can hold true in the National League where batting a pitcher #8 instead of the traditional #9 has been shown to be worth about two runs per season.

Against right-handed starting pitchers, although Avila is a better hitter (at least for now) than Castellanos, as the prospect is massively unproven at the big league level, Avila should be dropped to #8 in order to separate he and Dirks, both left-handed bats. The issue does not present itself against left-handed pitching, as Davis takes the place of Dirks, avoiding consecutive lefty bats oft avoided for late game matchup purposes. While the young Jose Iglesias has been hailed for his glove (and hands) at short, his bat continues to develop, and he remains an offensive threat mainly in the bunt for hit approach, of which he had 11 for Boston and Detroit this past season. As previously noted, having Iglesias #9 can't hurt, as it is relatively unimportant for him to get on base; however, there lies somewhat more significant upside in him getting on base and running ahead of the order's front side. 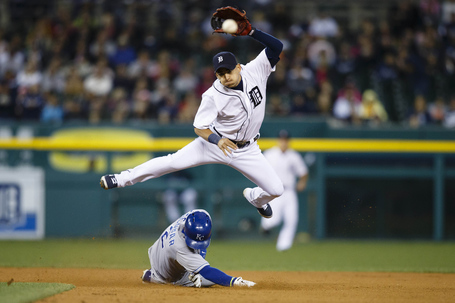 In conclusion, though some wrote off the Detroit offseason as a salary dump after moving Fielder, it appears more likely that the club (offensively) became substantively deeper even if it lost a little punch in the middle. After Fielder "struggled" in Detroit over his two-year stint (compared to his expected power standards), he will likely be better suited in a smaller, warmer ballpark, and the Detroit club will benefit in dropping a relatively unproductive power bat, and adding a high OBP (.349 career) control bat the club hasn't seen since Placido Polanco left for Philadelphia in free agency. Setting aside the pending depth issue behind the plate and assuming the health of Cabrera and Martinez are non-issues in 2014, Detroit appears poised to make another run at the division and league, which have both improved substantially over the course of this lively offseason.