While there are many examples of power hitters who frequently strikeout, is there any significant correlation between home runs and strikeout rate?

The archetype of the all-or-nothing power hitter has existed for as long as I can remember. From the fictional bat-praying, chicken-sacrificing character of right fielder Pedro Cerrano from Major League to the fastball-crushing, curveball-whiffing real life version of Wily Mo Pena, this image has appeared over and over again.

But, is there any truth to this baseball motif? Does having a "swinging for the fences" mentality at the plate necessitate a higher strikeout rate? Or, has this archetype been created, reinforced, and replicated to the point that we believe it to be true, even if it isn't?

To reach some sort of conclusion, I took all of the batting data* from the past five years (2009-2013) from FanGraphs, which provided a sample size of 731 data points. Then, I calculated the linear correlation coefficient between home runs and strikeout rate (K%) and graphed the results in Microsoft Excel (see below). 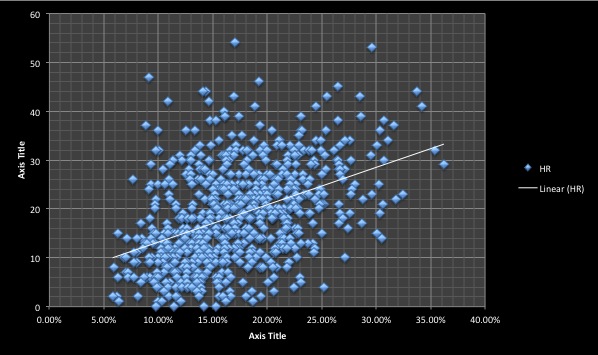 As you can see on the graph, the line of best fit is upward sloping, indicating that the relationship with these two data sets is positive -- as one goes up, the other does, too. To be exact, the linear correlation coefficient, or r-value, for this data is r=0.423, which indicates some possible traces of a positive correlation between home runs and K%.

With that said, r=0.423 isn't nearly enough to make a declaration that these two things are correlated. In fact, an r-value of less than r=0.5 is classified as a weak correlation. Based on this data, then, more power doesn't necessarily mean more strikeouts, as it seems to be mostly inconclusive. Still, what fun would all of this number crunching be if we didn't at least look at some of the most interesting data points over the past five years?

First, here are the players that actively promote the idea -- through their performance, at least -- that more power means more strikeouts. Since 2009, these are the players with at least a 30% strikeout rate that hit 25 or more home runs:

Several things from this data are intriguing. For starters, there are several repeat offenders: Mark Reynolds and Adam Dunn did it in three out of five seasons, and Pedro Alvarez did it twice. Frankly, I think most people would have thought of Reynolds and Dunn first if posed with the question, "who do you think has the highest strikeout rate for any player who hit more than 25 home runs in the past five years?"

Next, of players with the insanely high strikeout rate of 30% or more who hit a minimum of 25 home runs, only Chris Carter had less than 30 home runs. And, of the 11 examples listed, half of them hit 35 or more home runs. In other words, if a player hits for power and tends to strikeout frequently, he usually hits for a lot of power.

Now, what about the guys who strikeout a lot, but who don't hit many home runs? I'm glad you asked; here is the list of everyone since 2009 with at least a 30% strikeout rate and less than 25 home runs:

Drew Stubbs is the only repeat offender on this unattractive, albeit fairly short list. And, oddly enough, he's the only player on this list who didn't hit more than 15 home runs. Granted, six players is an extremely small sample, but two seasons with a strikeout rate above 30% and a combined 29 home runs is downright inexcusable.

Of course, as is the case with all stereotypes, there are those who defy said notions. Since 2009, here are all of the players with a strikeout rate less than or equal to 10% who hit at least 25 home runs:

The second is something that fellow Beyond the Box Score writer and editor Alex Skillin outlined in his recent article about Edwin Encarnacion. Power hitters with remarkably low strikeout rates are a true rarity. According to Skillin, since 2003, there are only 25 seasons in which a player had a strikeout rate below 10% and a slugging percentage above .500 (and, relating to my first observation, Skillin notes that eight of those 25 seasons were Pujols).

For the sake of consistency, I also looked at the players with a strikeout rate less than or equal to 10% and less than 25 home runs. Naturally, this yielded a lot of results -- 55 examples, to be exact. To save space, I have not included this list, but instead will highlight one name that appeared numerous times: Yadier Molina.

Molina had a strikeout rate lower than 10% in four of the past five seasons, with the exception being last season's near-MVP performance, in which it was 10.2%. Given that his wRC+ was over 125 in one of those seasons and over 130 in two of them, his low K% is impressive.

After all of this, it's hard to draw a concrete conclusion. While more power does not necessitate more strikeouts, it's still entirely possible -- probable, even -- that having a home-run-only mentality at the plate can lead to increased strikeouts. Still, as Albert Pujols and others have shown us, that likely stems from a lack of elite talent rather than from the proposed power hitter's folly.

*Only applicable to players with the minimum plate appearances to be qualified for this data set.