How do Tom Glavine and Greg Maddux compare to Sandy Koufax and Don Drysdale?

Traditionalists and sabermetricians can argue who should get into the Hall of Fame, but we can all agree Glavine and Maddux are pitching teammates we haven't seen since Koufax and Drysdale.

Share All sharing options for: How do Tom Glavine and Greg Maddux compare to Sandy Koufax and Don Drysdale?

Despite what you might hear from time to time, sabermetricians are not black magicians. They are baseball purists, asking the same questions that have been pondered for decades. For example, how do we compare one generation to another? Instead of leaving that question unanswered, however, sabermetricians seek to find the answer within the numbers.

With Greg Maddux and Tom Glavine elected into the Baseball Hall of Fame this week, it made me wonder how many teammates, pitching together in their prime, dominated the way these two Atlanta Braves pitchers did in the 1990s, which were my formative baseball years as a baseball fan. It poses the question: Was I witnessing what my grandparents witnessed watching Koufax and Drysdale?

There are traditional statistics that can easily be used to evaluate a pitcher’s performance. ERA is a perfect one. How many earned runs did a pitcher allow on average per nine innings? But this is where some context is needed. Baseball traditionalists will sit at round tables and bring up the point that we can’t compare Glavine/Maddux’ ERA to older generations because they pitched during the steroid era. In other words, it was more difficult to keep runs off the board when the opposing lineup was literally juiced with talent. Enter ERA+. Ah, a fancy sabermetrician statistic. Or is it? Adjusted ERA+ takes into account that league average ERA was different in different time periods. So we can compare how well Greg Maddux pitched in terms of earned runs allowed to Sandy Koufax, even though they pitched thirty years apart. ERA+ is essentially taking an age-old statistic, but adding conventional wisdom to it by accounting for the fact that the average number of runs scored is different across eras.

ERA+ is adjusted to league average, as well as ballpark factors. 100 is average for the given year, so a pitcher with an ERA+ of 110 means that the league average ERA was 10% higher than the pitcher’s ERA. In order to put Maddux and Glavine’s performance as teammates together in historical context, I compiled a list of Hall of Fame, or current Hall of Fame candidates, who posted an ERA+ season of at least 110 while playing on the same team. Interestingly, more times than any other Hall of Fame pitching duo, Glavine and Maddux pitched with individual ERAs 90.9% below league average as part of the same rotation. 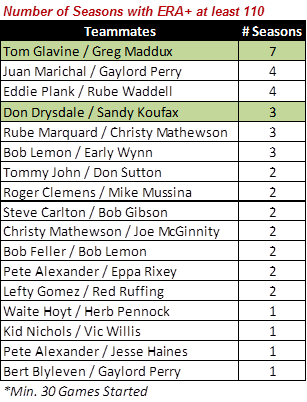 There are many Hall of Fame pitching duos that we could examine more closely in relation to Greg Maddux and Tom Glavine, but I decided to look at Sandy Koufax and Don Drysdale. Growing up, hearing old baseball stories – the traditional stuff that comes more from word-of-mouth rather than advanced statistics – no two pitching names went hand-in-hand more than Koufax and Drysdale. Are Maddux and Glavine the modern day Koufax and Drysdale?

To compare the two pitching duos, I first focused on the ten main seasons in which they each pitched together. For Glavine/Maddux that was between 1993 and 2002. For Koufax/Drysdale it was between 1957 and 1966. I then used a traditional means to evaluate how each pitcher compared to their respective leagues during the time period they played. The table below highlights which seasons one, or both, of the starters finished top five in the league in traditional statistics such as wins and ERA. I then added whether they won a Cy Young award in the given season. 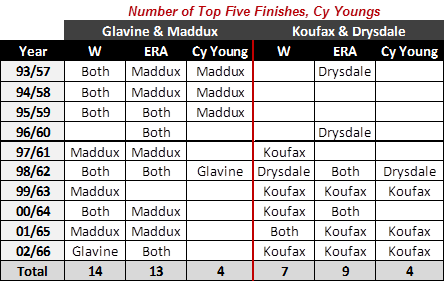 What is well-known about Sandy Koufax is that his peak came at an incredible height, but for a short period of time. The Maddux of 1993-95 pitching with Glavine matches the Koufax of 1963-66 pitching with Drysdale in terms of Cy Young dominance. What separates the four legends is the length of time they dominated. Glavine and Maddux found their names in the top five in wins and ERA twenty-seven combined times over a ten year span, compared to sixteen times for Koufax and Drysdale. The four compiled eight combined Cy Young awards, four for each duo. In 1995 and 1998, Glavine and Maddux produced the only two seasons in which they each reached the top five in wins and ERA during the same season.

In order to add more context than the traditional black ink concept of league leaders, the table below shows additional statistics.

What the numbers show matches what most of us would believe. Koufax and Maddux follow an incredible historical trend in terms of dominating their eras. Drysdale and Glavine are definitely the Robins to their respective Batmans, but both were dominant in their own right, with Drysdale performing a bit better than Glavine.

Besides ERA+, one more statistic that is interesting to consider is fielding independent pitching (FIP). Essentially, the theory is that pitchers can only control certain factors in their pitching outcomes – home runs, walks, hit by pitches, and strikeouts. The rest can be attributed to defensive play – hence the name fielding independent pitching – as well as luck, which BABIP takes into account. A league factor is also used to round out the number to an equivalent ERA number. By this measure, a player’s ERA is reflective of what they can directly control rather than being influenced by balls in play which tend to fluctuate year-to-year. FIP is a statistic often used to predict future performance, but with enough innings, it is also a good barometer of past performance. As the table highlights, both Maddux and Glavine had less luck with balls in play, which FIP takes into account and puts their ten-year measure together historically close to Koufax and Drysdale.

Every year, the Baseball Hall of Fame process brings out the strongest proponents and critics of utilizing advanced statistics to measure player performance. What I tried to do in this piece is show how our traditional viewpoints are often times supported by non-traditional statistics, since those "sabermetrics" are usually built on long-held baseball beliefs. Either way we look at it, we can all agree that for those of us who grew up watching Greg Maddux and Tom Glavine, we saw two teammates in the same rotation pitch to a level of excellence rarely matched over baseball history. They were in fact the Koufax and Drysdale of our generation.