Being left off the Atlanta Braves' postseason roster, Paul Maholm ended 2013 on a rough note. However, that doesn't mean that the veteran southpaw doesn't have any value.

Share All sharing options for: Finding value in Paul Maholm

One name that hasn’t generated much buzz around the campfire is Paul Maholm. I’m not saying it’s a surprise. He mustered a paltry 5.12 FIP from July through September, and that prompted the Braves to keep him off the postseason roster. Indeed, that’s an ugly way to foray into free agency.

But, saying Maholm’s market has been completely dead wouldn’t be accurate. We’ve heard a few whispers. Most recently, the Minnesota Twins were said to be "monitoring" Maholm, in addition to a handful of others. Which basically translates to this: he’s not Minnesota’s No. 1 priority, but if they’re still searching for rotation depth come early February, they’ll give him a look. Or something along those lines.

Elsewhere, the New York Mets talked to Maholm’s agent in December, but nothing is expected to come to fruition. The Mets have a slew of young pitchers capable of anchoring down the back-end of their rotation, but perhaps they go for the experienced option on a short-term deal to give the youngsters a little bit more time to develop. It’d make sense.

That’s pretty much it, though. And again, I can’t say I’m super-surprised. Maholm wasn’t terrifyingly bad in 2013, but he wasn’t good. Even "average" would, technically, be wrong, where FIP-, xFIP- and ERA- all go on a "100 is average" system.

xFIP says he’s been right around league average, whereas FIP- and ERA- are not as generous. So if there’s any positive news, it’s that Maholm hasn’t been terrible. That’s tough to call "good" news, though. Or positive. Or any synonyms of "positive."

Since the stats are stats, we need to go into detail. Sure, we can say he was bad, but knowing the "how" is important. There are three big red flags: velocity, more hard hits and not a whole lot of strikeouts.

Let’s first touch on the velocity, briefly, because Maholm has never been a huge velocity guy. It’s something, but we know the gist: He’ll sit in the high 80‘s, and occasionally touch 90. But never has his fastball averaged out at 90 mph over a full year, so you get the point.

But, since there has been a decline ... 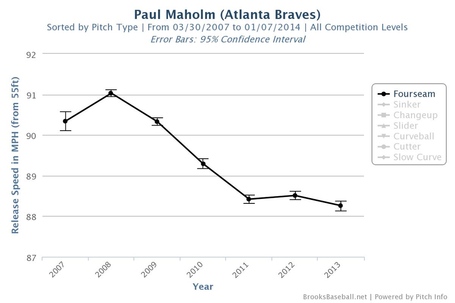 The decline since 2011 has been minuscule, at most. Sure, we can identify that he’s no longer in the 89 mph range, but that’s to be expected. He’s on the wrong side of 30, and with age goes velocity -- and Maholm didn’t boast a lot to begin with. Rather, he’s your traditional finesse pitcher, one who keeps hitters off balance with a varied arsenal consisting of more sinkers and cutters than straight four-seamers.

And there’s this, a 58 mph Uncle Charlie:

Problem is, Maholm isn’t flashing much finesse. We can classify as a finesse hurler, but there’s a fine line between a successful finesse pitcher and an unsuccessful one. He failed to keep hitters guessing in 2013. And, you know, those aren’t good things, even more so when you’re not throwing 90-plus regularly. The margin for error becomes tiny.

The 23.8 LD% marks a career high--by a little more than 2%, and it tells us a couple of things. One, he’s not in fact doing a great job of fooling hitters. That’s kind of a two-way street, so let me clarify. "Fooling" in this case isn’t necessarily a pile of strikeouts. Weak ground balls, weak fly balls and popups also count as "fooling."

That doesn’t change anything, though: Maholm hasn’t been fooling many batters, as illustrated by that lofty LD%, career-high 13.8 HR/FB% and below-average K% -- it’s actually up from his career K% of 14.9--but it’s still well below average. And this all comes without an abnormal BABIP. Suffice to say: he’s playing with fire.

The counterargument, of course, is that things will get better, because they have to, right? In some cases, fine, that theory works. A readily noticeable outlier has to regress more toward the mean, because outliers are outliers and a larger sample is needed to reach a somewhat accurate conclusion. Except, that theory is far from bulletproof, and in Maholm’s case, there’s an outlier, yes, but it’s not a "good outlier," given the red flags that we’ve already discussed.

Those things, in recap form: Maholm doesn’t have much margin for error with a soft fastball. Over the past three years, he’s allowed a lot of hard contact without a ton of abnormality in his BABIP. He’s not fooling anyone with his secondary pitches. And thus, there’s no reason to believe everything will be lollipops and rainbows come 2014 and beyond, just because his LD% deviated from normalcy in 2013.

So we’ve now hit on all the main red flags, and yes there are a few more, but those are minor ones that are ultimately byproducts of the main ones.

Now, let’s search for some positives. This is where a comparison becomes useful.

So here we have Bronson Arroyo, a fellow free agent looking for at least a two-year deal, Scott Feldman, who signed a three-year, $30 million pact with the Houston Astros, and Jason Vargas, who signed a four-year, $32 million deal with the Kansas Royals.

What Maholm's demands? That’s a big unknown. Because he ended the year in near-disaster form, he doesn’t have much leveraging power. Which, basically, means that he can’t state how many dollars and how many years he wants. Well, he can, actually; it wouldn't be very effective, though.

For just a moment, however, let’s focus on the table and the table only, and in doing that we notice one key takeaway: Maholm isn’t too far off. He does lead just one category. Vargas leads two, Feldman three and Arroyo comes away as the big winner with four.

We’re missing the point if we were to go off of "leads," though. Go column by column and try to find a huge gap between Maholm and the three others. I can’t, because there isn’t (RA9-WAR and innings pitched could be debated). So there’s the point: while Arroyo, Feldman and Vargas are/were the better products by reputation, putting Maholm in the same group is hardly laughable.

Yet, there’s likely to be a sizable gap between Maholm’s deal and the ones that Feldman and Vargas have already netted -- and, eventually, Arroyo’s deal. Just for a general idea of what we’re looking at, MLB Trade Rumors projects a two-year, $24 million deal for Arroyo, and a one-year, $7 million deal for Maholm.

One can quibble with those projections. They were released back in September for one, and from there, Maholm was subsequently left off Atlanta’s postseason roster. That’s a dent to his case probably not factored into the projection. Secondly, the market value for a starting pitcher had yet to be established at the time. So if Player A got X amount of dollars, that gets the ball rolling and might then change the price of other starters.

But the projections are a decent starting point nevertheless, and they highlight a potential annual salary differential between Maholm and Arroyo -- $5 million, to be exact. Maholm and Vargas don’t have much of a gap, but Vargas fetched himself four years. Again, these hypothetical differences probably won’t be exact, but they’re something.

So we know the good and bad of Maholm. There is, evidently, a little more bad than good. We noted some red flags that could point to future struggles, but we also noted that Maholm should be in the Bronson Arroyo-Scott Feldman-Jason Vargas class of free-agent starters (used to be for the latter two). If that’s a thing.

Of course, Maholm’s value lies in the fact that he’ll be cheaper while still providing similar value.

On the surface, it’s pretty close. Steamer projects Maholm to toss 144 innings, a reasonable projection, given that he's logged at least 150 innings in every year of his career, with the exception of 2005, his rookie campaign. If you're an optimist, you claim there's room for Maholm to tack on a bit more to his projection, making the case that he will start at least 30 games, not the projected 26. And if you're a pessimist, you claim that 144 innings is too much, decreasing the projection considerably.

Since there are a few important unknowns -- Maholm’s contract being the biggest -- it’s tough to make any definite assumptions, but we can conclude that Maholm isn’t too far off from the aforementioned Arroyo-Feldman-Vargas class, if at all. But ... he’ll be cheaper. That’s the key.

All statistics courtesy of FanGraphs, Baseball-Reference and Brooks Baseball.

Jake Dal Porto is a writer at Beyond The Box Score and Golden Gate Sports. You can follow him on Twitter @TheJakeMan24.