Tremendous pull power is something we all marvel at, but who's been the best at pulling tough pitches out of the yard since 2008?

Pull power is one of the most awe inspiring things to watch in our game. Homers, for the longest time, have been considered the main act that brings people to the park. Everyone wants to see how far a human can hit something. It's the same in golf and tennis. Our penchant for the long ball is the reason the home run race of '98 captivated a nation. It's the reason - among many others - that we remain in awe of players like Ruth, Aaron, and Bonds. We're still obsessed with the long ball; and rightfully so.

After watching a Jose Bautista home run earlier this year where he pulled a pitch that was nearly out of the zone - nearly missing low and away - I began to wonder how it was even possible to pull a ball to the complete opposite side of the of field to which the ball was pitched with that much authority. I continued marinating on it and eventually began to ask myself, who in the majors has the most pull power; at least in the sense of the guidelines laid out below.

The research, made possible by the wonderful site Baseball Savant, is simple. How many home runs did a player pull on pitches that are classified as "low and away." In order to classify which pitches are "low and away" I used the chart below, also provided by Baseball Savant. For right handed batters, the pitch had to be located in either the 9 or 14 quandrant and clear the fence in left or left-center. The opposite is true for left handed batters. 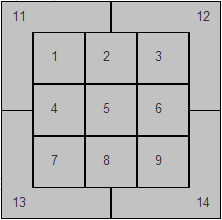 The results - at least somewhat - were as expected. Edwin Encarnacion and Jose Bautista were among the top 2 in homers for right handed batters. The other name, right at the top with 9 home runs, was Ryan Ludwick. Kind of shocking, but not extremely surprising.

I wasn't fully aware of just how rare it is for someone to pull a low and away pitch for a home run. Since 2008, the major league lead - at least for RHB - is ten. That's means the best right handed hitter at hits just a little over 1.5 per year.

In order to get a better idea of just how impressive these feats are, I want to focus on right handed slugger Jose Bautista and where exactly the pitches were that he hit out of the yard. 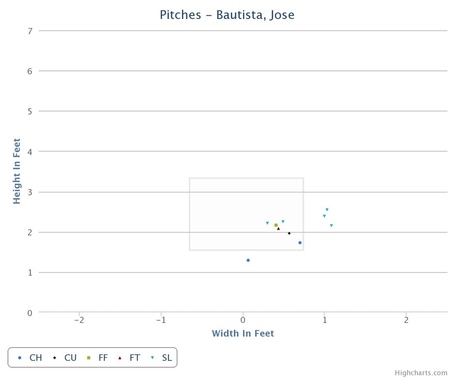 Aside from the dot that is exactly in the corner - the pitch that caused this piece - check out just how far off of the plate those 3 homers are. They're a whole foot off of the plate. If you want to see what I mean in gif form, you're in luck.

That little homer, courtesy of Joey Bats, is that tiny dot in corner of the box. The pitch was a change-up, which Bautista was a little out in front of, but the power is still massive.

If we switch to the other side of the plate, Brian McCann is king. I'll admit that despite being a Braves' fan and a resident of the metro Atlanta area, it shocked me.

I knew that McCann had plenty of pull power, but I never really considered him to have more pull power than say, Curtis Granderson or Jay Bruce. McCann's total can be somewhat explained by the fact that he saw more pitches in the two zones that we outlined. While he had more chances than the other players in the top 5 - based on qualified pitches - don't let that take away from the power he's shown. 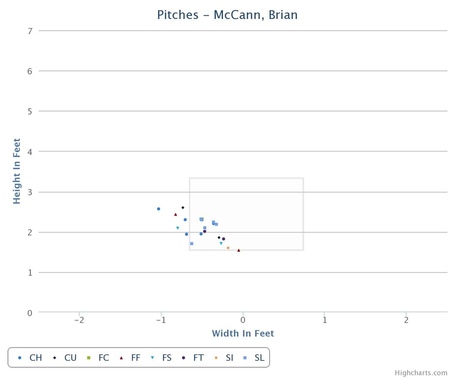 McCann's ability to homer off pitches in the stated quadrants is as impressive, if not a little more so, than noted masher Jose Bautista.

Obviously, McCann's power is no joke either. His ability to pull the pitch above - which was low and away - over the wall to right-center is extremely impressive and a thing of beauty. It's my belief that people overstate how much a new park will help a player's stat line, but there's no doubt McCann's pull power should play very well in his new New York home.

When I began looking into the data for this piece I wasn't sure what to expect. The main takeaway I received from the research - aside from being in awe of the power major leaguers possess - is how many more pitches down and away left handed batters see than right handed batters. Granted, it's a small sample size, but no batter on the right handed chart saw more than ~8% of pitches in the "low and away" quadrants. Compare that with that the fact that no one on the left handed list saw less than ~10% of pitches in the stated zones. Most power hitting lefties are known to be "dead pull hitters," so maybe I shouldn't have been that shocked that pitchers wanted to pitch away from them. On the other side, I was also unaware how few low and outside pitches are actually pulled for home runs. Ten pulled homers from one of the games best right handed power bats, seems like a small number, but it lends credence to how hard it actually is to pull outside pitches at times.

The next time you see someone pull a pitch that is extremely low and away and an announcer chalks it up to "getting the barrel out there," don't forget just how impressive it is.

*h/t to Jen Mac Ramos for the gifs

All statistics courtesy of FanGraphs and Baseball Savant.