The Padres bought out outfielder Will Venable's last two years of arbitration on Tuesday as they agreed with him on an extension. The deal allows the Padres to secure a strong player at a team-friendly price, which gives them financial flexibility to possibly extend Chase Headley.

The San Diego Padres have gone through many changes in the past few years. They've changed ownership, they've completely changed front offices, and they're currently trying to change themselves from a losing organization into a winning one. They took a step closer to that goal on Tuesday as they bought out Will Venable's final two years of salary arbitration. The deal will cover Venable's age 31 and 32 seasons.

As mentioned earlier, the Padres have been going through a lot of changes. Will Venable has been in San Diego for all of them. As a Super Two player, Venable entered the 2012-2013 off season heading into his second year of arbitration. After putting up a modest two-WAR season, he reached an agreement with the Padres for a one-year deal worth $2.675 million. Fortunately for the Padres and Venable, he then broke out during the 2013 season.

Now, "break out" is a phrase that one always must be careful with, but Venable certainly has increased his performance this year. While his walks are way down--at age 30, this is not exactly a great thing--his power numbers are surging. The most likely cause of said change is the change in Petco Park's dimensions--as seen in this article from Fangraphs' Jeff Sullivan.

Now, it would be short-sighted to simply say that the changes have helped Venable, but read about the changes at Petco here. The Padres made the bulk of their changes in right field--this helps Venable because Venable is a left-handed hitter, meaning that the porch is now shorter to his pull field. Could it be possible that Venable's increase to a 21% HR/FB ratio is a fluke? Yes. However, consider this split:

Now consider this table that shows the Padres' home run rates at home:

Without doing too much work, we can see that so far 2013 results are really not too far from the norm in Petco. 2013 is not too dissimilar for 2010 and 2009. Due to this, we head to the home run tracker courtesy of ESPN Stats & Information. What this shows is that Will Venable is the champion of the short-porch home run to his pull field with ten dingers falling between 350 and 400 feet to right field. If you look at his 2012 chart you will see that Venable had just four of said homers in 2012.

Now, it is possible that Venable could simply be doing something different at the plate, but this seems rather unlikely. He's hitting a very similar GB/FB ratio in 2013 as he did in 2012, he's walking less, and he's striking out more. At 30 years old, it is also very unlikely that Venable is experiencing some kind of training-induced power surge (his average true home run distance has remained virtually unchanged over three years). Venable has capitalized on his team altering his home park, and now the Padres are about to cash in on that change. 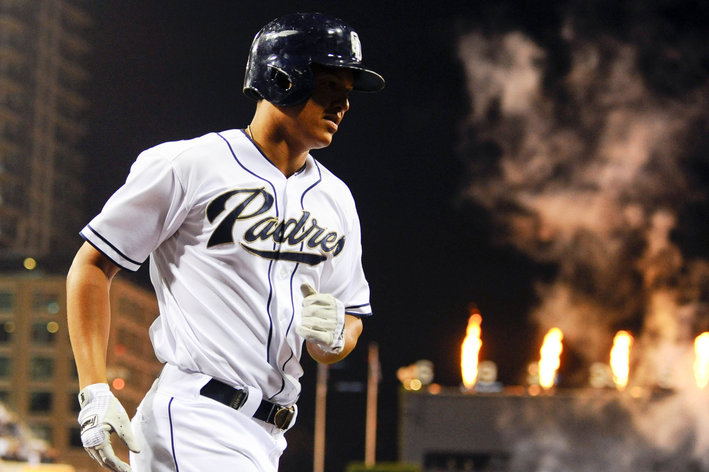 It's always wonderful to add average-or-better players to a roster, and it's even more wonderful to do so for a dollar amount that requires the player to produce less than a win in value. Now, it is important not to react too crazily to this deal. After all, if the most recent off season showed us anything it's that arbitration is a thing of the past. It is very unlikely that the Padres and Venable would have gone to arbitration either of the next two years, so this is about two things: 1) Venable gets guaranteed money that protects him from injuries and fall offs and 2) The Padres are "protected" from Will Venable continuing to snipe Petco's new right-field porch.

However, it would be silly to sell Venable short and only talk about his homers in the new Petco Park--after all, Venable was a good player before this year. He's averaged a steady two fWAR over the past four seasons with average defense and good base running mixed in with acceptable batting--keep in mind, Venable has not necessarily played a ton either as his two best seasons in terms of games played are 148 and 131.

Venable is an above-average player who has seen a change in ballpark dimensions truly help his numbers. This is something the Padres capitalized on as they continue to build a roster around the new Petco. There is often talk about "hitters parks" versus "pitchers parks", but one of the most important things in acquiring/projecting players is using specific park dimensions to predict home runs. With the changes in Petco, it's likely that Venable's performance is here to stay--to an extent--so buying him out now is better than waiting for him to repeat the perforamance.

The best part of this deal is that the Padres get Venable's age 31 and 32 seasons, which means they'll get him before he really begins the tail-end of his career. If he's still mashing homers towards right field in Petco by then, he'll likely pursue a decent free-agent contract. It's interesting to think that Venable perhaps would have never seen this career change without the changes in Petco's dimension.

Shortening the porches has led to more offense and a better Will Venable.

Where the Padres go from here

I doubt the Padres had Will Venable specifically in mind when they decided to shorten the dimensions in Petco, but he certainly has been the primary benefactor. The change has helped him so much that it might be fair to speculate that left-handed power hitters might not be as afraid of Petco as they had been in the past, which makes San Diego just a little bit more appealing to free agents. However, this is a minor aspect of the impact Venable's deal/performance might have.

The largest impact of getting this deal done will be on improving the Padres in the short-term, particularly with a possible Chase Headley extension. Unfortunately for the Padres--and for Chase--he hasn't followed up his MVP-esque season with another great year--he's simply been really good. Headley recently talked with Bill Shaikin of the Los Angeles Times about his impending free agency and made it pretty clear that he's not just going to hand the Padres a discount. By getting Will Venable signed to a cheap deal, they free up assets to improve their odds of bringing back Headley for 2014 and beyond.

It's always a bit dicey to try to speculate what teams are trying to do, but left-handed hitters will benefit more than right-handed hitters from the change at Petco. Seeing as Will Venable is left-handed and Chase Headley sees most of his at-bats as a lefty against right-handed pitchers, it would not be surprising to see the Padres attempt to have both guys around in the future to take advantage of the shorter porch--along with other left-handed hitters. Buying out Venable's last two years of arbitration is another step in building a great Padres team.

A thank you to ESPN Stats and Information, Fangraphs, and Baseball Reference for the information that went into this article.