Share All sharing options for: Success rates for Short-season A League prospects based on walk and strikeout rates 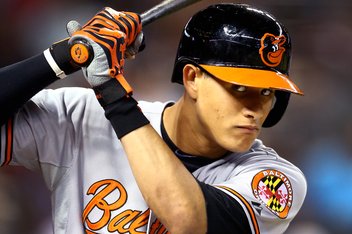 Alex Skillin looks at the adjustments former prospect Manny Machado has to make.

Prospects are required to have 75 PAs at a level to qualify in this analysis.

Here are the historical results for prospects in short season A, split by BB%, K%, and age.

The success rates for the different categories are similar here to the Rookie level. High/High players have the best chance, while the players in trouble tend to gather towards average.

Teams seem to send drafted college players to short-season A, hence the large number of 21-year olds. Once a player is in his age-22 season, he should be ready for the next level.

How do 2013 preseasons consensus top 190 prospects and early draft picks that played in short-season A this year stack up in this analysis?

Thomas was ranked as the 134th best prospect in the 2013 draft, but fell to the Yankees in the 8th round. His ratios looked good this year, but he will have to really drop his K totals next season to stick as someone to watch. Gavin Cecchini was the only top prospect from last season and his prod% is better than average. However, he will need to start walking more often or those chances may drop significantly.

Bryant climbed the ladder from Rookie to Short-season A to High-A this year, but will only appear on this list due to playing time requirements. His percentages don’t look good here, but are much more favorable in the short time he spent at Daytona. He only had three walks in 62 PAs, which would be far too low in a full season, but his chance at becoming a productive hitter from those stats sits at 29%.

Peterson is another early 2013 draft pick that hurt his chances in short-season A but improved them later in the season. Unfortunately, he was hit by a pitch and suffered a broken jaw in August. As long as there are no lasting effects from that injury, his prod% currently sits at 33% based on 107 PAs at Class A Clinton.

Assuming each of these players move up to High-A next year, some may have to improve their approach to continue to be successful. For instance, a High/High approach works in the low levels, but not as well in A+. Ragira, Jagielo, and Thomas in particular will need to cut down the Ks to stay relevant. On the other hand, if Wilson and Knapp simply maintain their average approaches in A+, they will increase their stock.

Short-season A is very similar to the Rookie levels in that extreme approaches lend themselves to more productive future hitters. However, the hitters tend to be slightly older in this level, probably due to teams sending college draft picks there immediately after signing. Which other players in Short-season A ball caught your eye this year?