Is it time for Joe Mauer to leave the plate?

After catching his whole career should the Twins move Joe Mauer to a different position?

Share All sharing options for: Is it time for Joe Mauer to leave the plate?

Ever since Joe Mauer started playing full-time he's been one of, if not the best, catcher in all of baseball. He's the only catcher in baseball history to win three batting titles. He's on his way to passing 50 total fWAR for his career. He has the second highest OBP ever among catchers. You get it, he's really good. We'd all love to see Mauer keep this up as long as he can, and that means it might be time for Mauer to finally move out from the catcher position. Originally I had thought that he could have waited another couple of seasons, but he's currently on the seven day disabled list due to a concussion, and in order to prevent those in the future it might be best to move him now.

We talked a little about his historical numbers above, but the rest of this post is going to look at how good he's been since 2005, as well as what we might be able to expect from him going forward.

Starting in 2005, Joe Mauer became the Twins full-time catcher. Since that time frame one could make the argument that he's been one of the best 10 players in all of baseball. According to FanGraph's version of WAR Mauer has ranked seventh during that period, coming in at 42.6 total fWAR. Now WAR isn't perfect, especially when you consider the defense aspect, but that's still quite an impressive number.

If you look at this chart you can see that Mauer's in pretty good company when it comes to WAR leaders since 2005. Naturally it includes some of the greatest players in the game. I didn't include it in this chart, but Mauer also has the fourth fewest amount of PA's during that time, making his WAR totals even more impressive. In fact, while he has the seventh most WAR since 2005 he only ranks forty second in overall games played.

It's no secret that Mauer's dealt with his fair share of injuries while being in Minnesota, and his most famous incident is easily the bi-lateral leg weakness that occurred in 2011. Joe only played 82 games that season, while only producing 1.3 fWAR. Currently he's out with a concussion, and that leads us into the main topic of this article.

Should the Twins permanently move Joe Mauer out of the catcher position in 2014?

As you all know, the Pittsburgh Pirates acquired Justin Morneau from the Twins on Saturday. Morneau is scheduled to be a free agent after the season, so there's a chance of Morneau returning, but I'm not sure how likely that would be. With that said, and with the help of our very own James Gentile, I took a look at what Mauer's WAR would look like if he played 1B full-time. Also just for the heck of it I took a look at what he'd look like at 3B, and RF. 3B seems like it'd be the least likely to happen, a big reason because top prospect Miguel Sano is nearly ready.

The results can be seen in the following image: 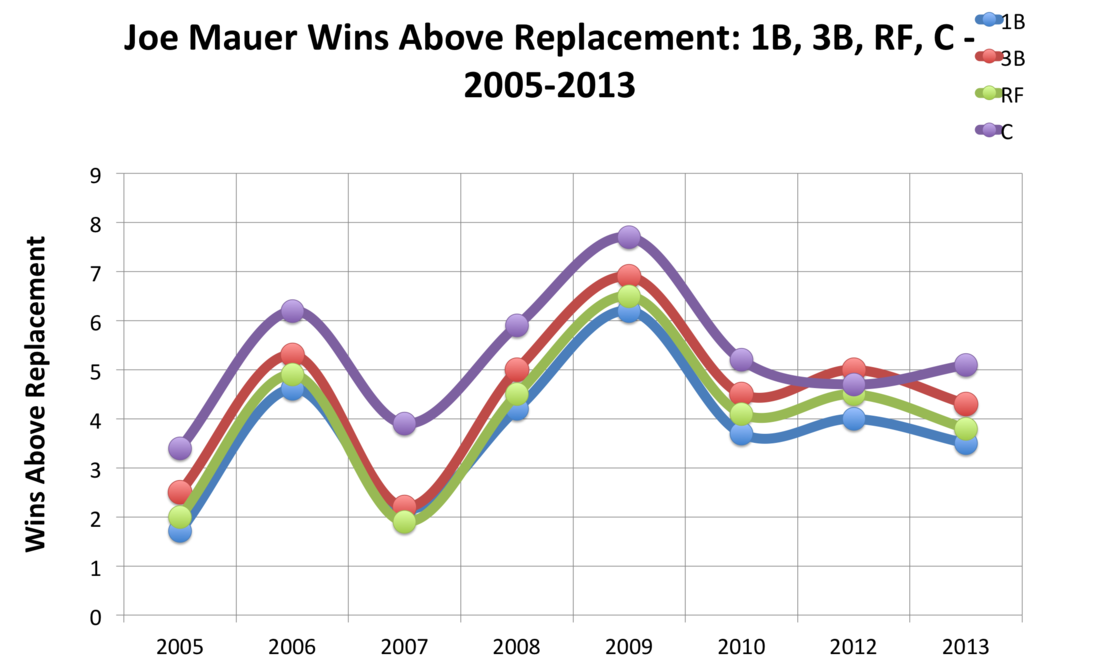 As you can see Mauer has clearly been the most valuable as a catcher, but if you convert his numbers to see how he'd be at the other positions he actually becomes the second most valuable as a third baseman. Like I stated earlier though it's highly unlikely that Mauer ever moves over to third, because Miguel Sano is knocking on the big league door.

Playing at would probably be the most likely possibility, especially because the Twins have a plethora of outfield prospects. Mauer would actually be a solid first baseman, so it wouldn't be a bad move at all. If he had been playing first all year in 2013 he'd be having the fifth best season among all qualified players. It's likely he'd even be higher since he'd probably be playing more games, rather than having so many off days.

For example: Edwin Encarnacion and Paul Goldschmidt have played about 20 more games than Mauer, and have between .8-1.5 more WAR than him. It's unlikely Mauer would have had an additional 1.5 WAR, but you never know. Rather than playing 130-140 games a season, one could probably expect 140-150 games a season.

Here's how Mauer would rank at each of those positions during that timeframe, based on his cumulative WAR for each position.

Keep in mind that I didn't convert Mauer's 2011 season since he was hardly healthy all year, even if he did play 82 games. If he had been healthy it's highly likely that he'd be even higher on these rankings. Like I stated earlier though, it's unlikely that Mauer ever goes to 3B since it looks like that job will belong to Sano, sooner rather than later. RF also seems unlikely since they have a good amount of outfielders in the minors.

In fact Mauer would almost be a Joey Votto-lite while playing first base.

Minus the power Mauer and Votto are extremely similar players. They both maintain extremely high BABIPs, while posting above average LD%. Both walk at impressive rates, but Mauer hardly strikes out at all. Add that to his outstanding .406 OBP, and you have quite the player. For reference here's a WAR graph that compares Mauer, and Votto's career WARs based on age.

Mauer has a fairly unique skill set, definitely not a traditional first baseman skill set, but it appears like it would work out if the Twins wanted to give him a shot. He's still owed $115 million dollars, and as long as he stays healthy he should continue to hit. If he ever did get moved to first he's easily capable of being a 3-4 win player, with the possibility of sneaking in a 5 win season. I imagine the Twins would love to have him healthy when they start to contend again, and their best bet would probably be to move him out of the catcher position.