Yan Gomes and the (w)Indians

The Tribe is on the verge of making the postseason, due in part to an entire team effort. The front office added numerous pieces this offseason including a new manager, but it might be a lesser known transaction that has proved to be one of the most influential.

Share All sharing options for: Yan Gomes and the (w)Indians

The Indians have been winning. Entering Friday's game against the lowly Minnesota Twins, the Indians had won 89 games, already more wins than the franchise has accumulated in a single season since 2007. A team's overall win-loss record tells the story of a team's success or failure, and the story of the 2013 Indians can be summed up by the portmanteau word, windians. While Cleveland continues to suffer from dispassionately low attendance numbers, the team continues to beat up on their opponents in an effort to make the playoffs. As of Friday afternoon the Indians sit one game ahead of the Texas Rangers for the 2nd wild card spot in the American League, with three games left against the Twins in Minnesota. While the possibility exists that the Indians find themselves narrowly missing out on the postseason, the odds are in their favor.

Using the three main tabulations of wins above replacement, we can see which position player has proven the most valuable to the team's 2013 performance.

As usual, based on the differences between the different tabulations of WAR, we come up with two different names. When we expand this list to the top three though, the same three names pop up, 2nd baseman Jason Kipnis, catcher/designated hitter/1st baseman Carlos Santana, and catcher Yan Gomes. Kipnis has proved to be the team's most valuable offensive threat, smacking 17 home runs, scoring 82 runs, stealing 29 bases, and putting up a 129 wRC+. Santana doesn't encompass the well-rounded offensive repertoire that Kipnis does, but when it comes to outcomes at the plate, he performs a bit better. Santana's .376 OBP ranks first on the team, as does his 3.52 REW, and just as a kicker, he also leads the Indians in Clutch at 1.96.

While Kipnis and Santana have performed well at the plate and on the bases all season, when it comes to the Indians most well rounded and most overlooked player, Yan Gomes wears the crown. Despite ranking in the top three on the Indians in wins above replacement, Gomes ranks tenth on the team in plate appearances at 309. He has played just over half the season, participating or starting in 85 games entering Friday. Currently 26 years old, up until this season Gomes' only claim to fame was that he is the first Brazilian born major league baseball player. Now though, the fact that he hails from Brazil should be relegated to secondary importance, as Gomes has begun, and should continue, to make a name for himself as a productive and efficient player at one of the toughest positions in baseball.

Gomes landed in Cleveland not via the pool of international free agents, not via the rule-four draft, but by trade. After 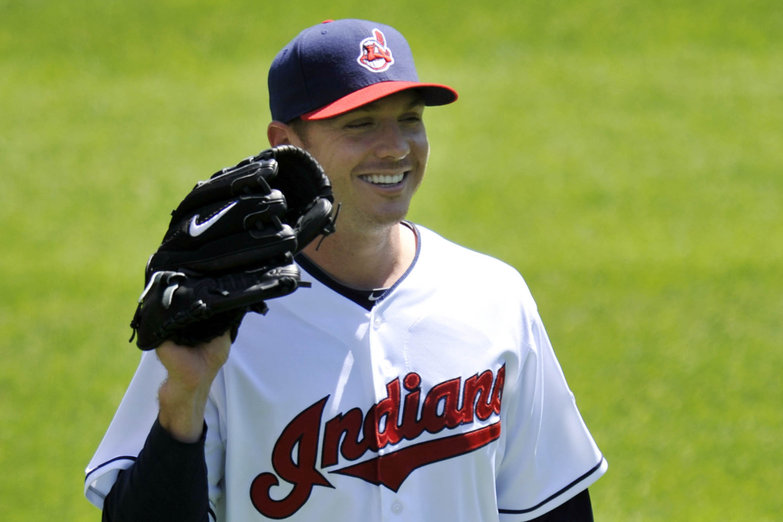 With more on recent Indians acquisitions contributing to the cause, check out Stuart's piece on Scott Kazmir

coveting then Indians reliever Esmil Rodgers for somet time, Blue Jays General Manager Alex Anthopoulos finally found a trade that worked. Anthopoulos traded utility infielder Mike Aviles and backup catcher Yan Gomes to the Indians in exchange for the aforementioned Rodgers. Anthopoulos and Indians GM Chris Antonetti made the trade in November of 2012 after new Indians manager Terry Francona and bullpen coach Kevin Cash gave their approval of Aviles and Gomes. According to an article by Dennis Manoloff of the Cleveland Plain Dealer,

"Francona and Cash then helped Antonetti execute a trade that has helped the Indians immensely this year and might for years to come. On Nov. 3, Antonetti acquired utility man Mike Aviles and Gomes for reliever Esmil Rogers. Francona wanted Aviles; Cash and Tribe scout Dave Malpass enthusiastically endorsed Gomes."

Essentially, the bigger prize in the deal was Aviles, and the wild card was Yan Gomes. These low-level, seemingly insignificant trades occur every season. Often nothing comes of these deals, but sometimes, especially towards the end of the next season, these trades prove not only significant, but also crafty and crucial. The Indians made a number of moves in the previous offseason that have vaulted them back into playoff contention including signing Nick Swisher and Michael Bourn, but the addition and subsequent maturation of Yan Gomes has proven equally as important to the team's current success.

Now that we have established Gomes' value to his team, and the means by which he came to wear an Indians uniform, let's delve into some numbers. From a hitting perspective, Gomes has performed well. His .295/.350/.491 slash line depicts a hitter who gets on base in the classic sense, by putting the ball in play and recording hits. Gomes also displays some power, putting up a .196 ISO, while eleven of his 83 hits have sailed over the fence for home runs. Gomes' 135 wRC+ derives some from his .343 BABIP, but for a hitter with a 5.8% walk percentage, it's quite possible that as his sample size of plate appearances grows, his BABIP will remain above the .297 league average.

Gomes does have a propensity for striking out, as his 20.4% strikeout percentage does eclipse the 19.8% league average, but the minimal difference combined with his league average swinging strike percentage and slightly above-average contact percentage portray a hitter with decent plate discipline who may just need more plate appearances to bring his strikeout percentage down a bit. Nonetheless, Gomes seems apt at the plate, and while the inevitable adjustments that pitchers will make has yet to be a factor, it is reasonable to assume Gomes' hitting numbers may drop a bit in the coming year. Despite all of that, the fact that Gomes has impressed his manager, and become an integral cog in the Indians lineup already points towards an improving hitter.

While hitting comprises one part of the equation, when it comes to Gomes, his performance at the plate barely scratches the surface. In Toronto, Gomes played squarely behind starting catcher J.P. Arencibia, giving him little opportunity to showcase his athleticism, talent, and acumen behind the plate. With the Indians moving Carlos Santana, who have become primarily an offensive threat, to a combination of 1st baseman and designated hitter, Gomes has moved into the starting catcher's spot. Gomes began catching almost full-time in June, and since August 1st, he has started at catcher in 37 out of the 52 games played by the Indians in that same time span.

Why has Gomes essentially won the starting catcher's job, and will presumably keep that title heading into the start of the 2014 season? Gomes excels at almost every facet involved when playing catcher. Despite his six foot two inch 215 pound frame, Gomes glides effortlessly behind the plate. He has quick feet, and a strong, and for the most part, accurate arm. Gomes hasn't yet become a great pitch blocker, but he has accumulated 10 defensive runs saved this season, a 1.1 FRAA, and has caught 20 runners attempting to steal in comparison to 28 runners who have stolen a base successfully. Gomes ranks in the top tier of catchers with pop times consistently below 2 seconds, which portrays his athleticism and aids in catching runners attempting to steal. Still, Gomes has work to do when it comes to blocking pitches, and needs to continue to work with his pitching staff to not only gain their complete trust, but to learn how to keep a solid pace to the game. He needs to improve his pitch sequencing as well, but these skills take time and experience to improve, something Gomes should be afforded, now that he has proven his worth on the field.

One area in which Gomes has not only excelled, but has shown immense improvement is in his pitch framing abilities. According to Statcorner.com, Gomes ranks 8th this season amongst catchers with at least 2,000 pitches caught in runs saved above average at 14.9 runs. Given that Gomes has only caught in just above half the games the Indians have played this season looking at his RAA per game proves useful. Gomes per game RAA of 1.51 this season also ranks 8th amongst all catchers, ahead of such efficient and well-known pitch framers as Russell Martin, Yadier Molina, Brian McCann, and Buster Posey.

Gomes didn't play often in 2012, but when he did, his framing numbers paled in comparison to his 2013 stats. Gomes only caught just over 400 pitches in 2012, but he posted a slightly negative RAA and RAA/game. While Gomes' 2012 numbers have small sample size issues written all over them, in order to post the top-ten numbers he has in 2013, he had to have worked diligently on his framing skills. Despite his larger frame, Gomes keeps his body fairly motionless when receiving, with minimal head movement, and a propensity for angling his body well in order to give the umpire a clearer view of the pitch. He has more work to do, especially when it comes to catching pitches not thrown near his starting position, but given the minimal amount of time he has had behind the plate, and the obvious improvements he has already shown, Gomes's framing abilities should continue to mature.

Now we land at the best part of the Yan Gomes story, especially from the Cleveland Indians' point of view. According to xvalsports.com, Gomes has been the fourth most valuable catcher in the major leagues this season when taking into account his value as a player and his salary. Gomes will make $500,000 this season, but XValSports estimates he has been worth just over $11 million more than he has been paid in 2013. Using Fangraphs' dollars category, Gomes' play in 2013 would be valued at about $18.4 million on the free agent market. Given that Gomes has played only half a season, and assuming that in a full season his offensive value might drop a bit, but also considering that neither of these valuations take into account pitch framing, it is safe to assume that Indians have and will continue to get incredible bang for their buck.

In the end, discussing the accomplishments of one player proves both fascinating and enlightening, but that one player, like Gomes, makes up just a piece of the puzzle that when completed yields a playoff contender. The Indians haven't locked up a playoff spot yet, but according to Fangraphs the teams has an 81.5% chance of taking the second wild card spot. Baseball Prospectus puts the same prediction at 67.1%, but whichever one you choose, the odds still favor the Indians playing in the post season. As a whole, the Indians deserve credit for what they've already accomplished this season, and bringing players like Gomes into the fold is only one part of that equation. Gomes has the skills to become an everyday starting catcher for years to come, and in doing so help the Indians in accomplishing their goals.