The career renaissance of lefthander Scott Kazmir has been a surprising source of productivity for the Cleveland Indians. What has Kazmir done in 2013 that has breathed life back into a career left for dead?

For the Cleveland Indians, 2013 has been full of surprises; from their chase for a wild card berth to unexpected seasons from the likes of Ryan Raburn, Ubaldo Jimenez and Justin Masterson, the Indians have performed collectively in a fashion that most pundits were not expecting from the team, at least this season. One of the bigger surprises seen on the team, if not all of baseball, is the return of lefthander Scott Kazmir. Kazmir's return has been highlighted by the impressive return of velocity to his fastball compared to when he was last seen on a major league roster in 2011 with the Los Angeles Angels of Anaheim, due in part to a change in training methods that he undertook in his time away from the major leagues.

While the swing in fastball velocity is impressive and nothing to sneeze at, have there been other things at the root of Kazmir's 2013 success, other than just a return to elite velocity from the left side? 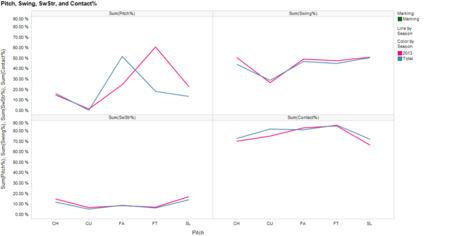 Looking at Kazmir's 2013 pitch frequencies (Pitch%), swing rates (Swing%), swinging strike rate (SwStr%), and contact rate (Contact%) across his pitch repertoire compared to his career averages, we see a couple of things he is doing in a slightly different fashion. First, he is using his four seam fastball (FA) less in 2013 in favor for his two seam fastball/sinker (FT) as his primary pitch to go with his always devastating slider (SL). While he has always used his change up (CH) sparingly, it has become more of a swing and miss pitch for him, as can be seen by the rise in swinging strike rate and drop in contact rate this season.

We have already discussed the return of Kazmir's fastball velocity in 2013 helping explain his return to prominence -- have there been any differences in terms of the movement on his pitches? 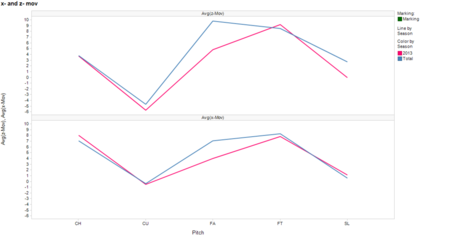 By the looks of it, Kazmir ditching the four seamer was a good idea, as it seems to have suffered the most in terms of losing sink and tail to the offering, although his slider has lost a little vertical (z-mov) movement as well. Combine that with some extra life to his change up and we still are looking at essentially vintage Kazmir, movement-wise.

Thinking back to vintage Kazmir, let's discuss his lefty/righty splits and see if those have improved, as if there was anything that he struggled with in previous years, it was consistently getting right handed hitters out:

Kazmir's career renaissance has still seen him continue to struggle with neutralizing righties, with the splits still remaining in 2013, even becoming worse in some respects. It appears Kazmir has still had a problem with keeping the ball in the park against righties, as previously discussed here at Beyond the Box Score; however, he has apparently turned up the heat on lefties in 2013, outperforming his career averages against lefties this season.

Looking at batted ball results, the problems Kazmir has had with righties becomes more apparent. While he is giving up more line dive and fly balls to righties compared to lefties, he is doing so at a rate lower than his career average. Small victories, in some respects. Another interesting disparity seen is how well Kazmir neutralizes lefty bats in spite of a higher line drive rate in 2013. 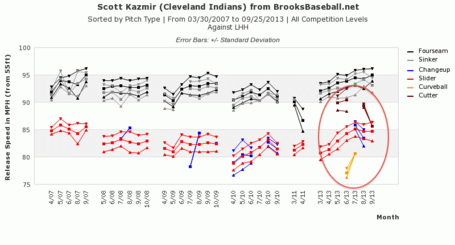 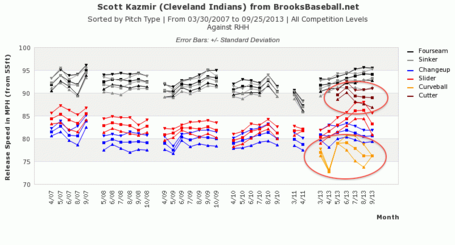 In general, Kazmir was and still remains a two-pitch pitcher against lefties, with the occasional change up or curve to keep hitters honest. It also appears he started to throw an occasional cutter (circled) in his later starts this season. While his slider movement has dropped a bit, he does appear to be throwing it on average harder than he has in years, possibly countering some of the loss in bite of the pitch.

So we have what appears to be a devastating fastball/slider combo against lefties that doesn't have the same effect on righties, even when mixing it with a number of other offspeed pitches, including a curve, change, and cutter. What in Kazmir's repertoire has been working and what could possibly be used moving forward to neutralize righty bats?

When it comes to Kazmir's approach against lefties, the adage 'if it's not broken, don't fix it' rings true -- a power fastball/slider combo has been his go-to since his early years and continues to be in 2013. While we have seen that his slider has lost a touch of bite but a gained a tick in velocity, it still remains the wipeout pitch it always has been. What is interesting are the other pitches Kazmir has tried against lefties, in particular, the cutter. Thrown more frequently compared to the change and curve, he has turned to it as an alternative to the other two pitches, which he appears to have scrapped altogether in July/August time. While Kazmir does appear to have had some success with the cutter, its similarity to his slider in terms of release and action could be a slippery slope if he chooses to utilize it more frequently, and could cause him to lose further bite and velocity to his slider.

For the righties, the salve for the splits isn't as cut and dried for Kazmir. He appears to be throwing the kitchen sink at them, in an attempt to find something that sticks beyond his fastball/slider combo and hopefully makes them more effective. If 2013 is to be his guide, it would behoove Kazmir to scrap the cutter against righties (and probably altogether) and also the change up in preference for his curve. While he isn't going to miss many bats looking at his 2013 whiff rates for it, it does appear to be a safe third pitch. It also appears to not be a pitch that most righties have been able to drive or hit out of the park, which lends itself to be a potentially better third pitch compared to the change up.

With one start remaining in the regular season, Kazmir's 2013 body of work is essentially as you see it; power pitches occasionally hampered by a couple of fatal flaws revolving around a propensity to give up the long ball and a tough time in getting right handed hitters out. In spite of that, Kazmir's 2013 has been a wonderful surprise and testament to the hard work and dedication to improving as a pitcher; it is also one that plays a predominant role in why Cleveland are in the position they are today -- on the precipice of the playoffs.