Andrew Cashner gets the start

Throughout his career, Andrew Cashner has waffled between being a starter and a reliever. After finally getting a legitimate shot as a starter in 2013, Cashner has made the Padres look like a smart organization and proven that his future lies not in the bullpen, but in a major-league rotation.

Share All sharing options for: Andrew Cashner gets the start

For much of his professional career, Andrew Cashner has been stuck in that uncertain zone between being a starter and a reliever. Back when the Chicago Cubs drafted Cashner in the first round (19th overall) of the 2008 MLB Draft, the 6’6" right-hander had just finished his junior season at TCU. He had been a dominant reliever in college, striking out 80 batters in 54.1 innings pitched during that 2008 campaign, but after drafting Cashner, the Cubs sought to develop him as a starter in the minors.

Writing back in 2010, just as Cashner was on the cusp of reaching the majors, Baseball Prospectus’ Kevin Goldstein wrote this about the former Cubs farmhand:

Unlike many closers, Cashner actually has a quality changeup, and with his dominating fastball/slider mix in front of hit, his value increased exponentially in the rotation. He's been one of the most dominant starters in the minors this year, as seven shutout innings on Saturday gives me a 0.95 ERA in three Triple-A starts, but that's not what the Cubs need. They need bullpen help, and Cashner is ready. Let's just hope it's a temporary fix so all of this really smart development doesn't go for naught.

Dating back to 2009, Cashner had made 33 starts for Chicago in the minors, posting a 2.60 ERA in 100.1 innings pitched between High-A and Double-A in 2009 and a 2.05 ERA between Double-A and Triple-A in 2010. A week later, the Cubs did exactly what Goldstein feared they might do, calling up Cashner and putting him back in the bullpen, where he made 53 appearances for the Cubs that season.

After straining his rotator cuff and missing much of the 2011 season, Cashner returned to pitch out of the bullpen for Chicago that September before the Cubs traded him to the Padres in January of 2012. The Padres indicated that they intended to use him in the bullpen, and they did just that before seemingly changing their minds and sending Cashner back down to the minors in June so he could prepare for life as a starter. 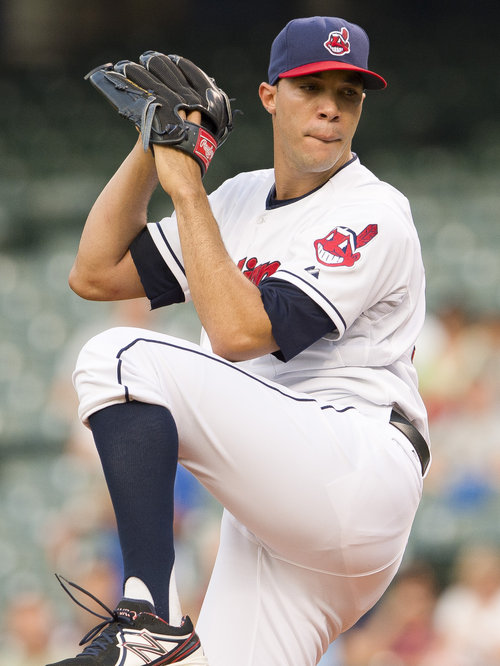 Another forgotten starter, Ubaldo Jimenez, has bounced back in a big way in the second half. Can we expect him to keep this up?

Following a strong start against the Houston Astros on June 28, Cashner again injured his shoulder and did not return until September. For whatever reason, Cashner began the 2013 season back in the bullpen before making his first start this year on April 20 against the Giants. Since that date, and after a prolonged four-year period in which he waffled between multiple roles as a professional pitcher, Cashner has made 25 starts for the Padres and posted a 3.04 ERA, a 3.29 FIP, and a 52.8% groundball rate, which ranks sixth-best among all major league starters.

As the MLB season has moved into its final stretches, though, Cashner’s performances in the San Diego rotation have only improved. His ERA (2.14, sixth-best in baseball since the All-Star break) and FIP (2.91) have both dropped during the second half, while his strikeout rate has risen from a pedestrian 16.2% to a far more respectable 20.8%. In three September starts, Cashner has struck out 21 batters and walked just one in 23.2 innings pitched.

Just as Goldstein wrote back in 2010, the bearded right-hander’s arsenal is far better and more diverse than that of your typical late-inning reliever. While he always possessed an electric fastball and slider combination, Cashner has been able to mix in a changeup, and increasingly in 2013, a sinker to attack opposing hitters. That sinker has been an essential addition to Cashner’s repertoire, helping him generate loads of groundballs, as the pitch has the sixth-highest groundball per ball put in play rate (67%) of any sinker in the majors, according to Baseball Prospectus.

Along with his changeup, Cashner’s newfound sinker has allowed his huge fastball (currently averaging 95.6 mph in 2013) and wipe-out slider to maintain their effectiveness when he starts. Once his second-favorite offering, Cashner’s slider is now his fourth-most used pitch, but nevertheless, it remains his best, holding opponents to a .194 batting average against and generating a 33.7% whiff/swing ratio.

Pitchers like Cashner don’t come along too often. While the Cubs initially developed him as a starter, many believed—including the Padres themselves at one point—Cashner’s best role still lay in the bullpen. After finally staying healthy and getting a prolonged chance to start in the majors, the 27-year-old has proven his best and most valuable role instead lies in a big-league rotation.

Although the Padres have long been out of the playoff picture, Cashner’s emergence as a top-of-the-rotation arm is a huge boon for San Diego’s long-term prospects. Given the pitcher-friendly tendencies of Petco Park and the numerous young arms the Padres have developed, San Diego could have one of the better rotations in the National League in the years ahead. And considering how well he has pitched in 2013, there is little chance Cashner will be asked to return to the bullpen anytime soon.

All stats courtesy of Brooks Baseball and FanGraphs.com unless otherwise noted.