Share All sharing options for: Success rates for Rookie League prospects based on walk and strikeout rates

The great Minor League Player of the Year debate 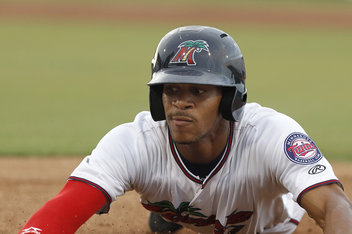 With the minor league season all but done, it's time to talk about the great seasons of George Springer and Byron Buxton.

The following table is an estimate of where these cutoffs lie in terms of BB% and K% values. These numbers vary by league and year, but these are good benchmarks on average.

Here are the historical results for prospects at the Rookie level, split by BB%, K%, and age.

The sample sizes are not big, but there are a few interesting trends to note. First, most prospects have low or average K rates. 47 appear in the low K categories, while only 17 have a high amount. Also, the top categories for productive% are at the extremes – High/High and Low/Low. High/Low, which may be considered the best category, has the lowest success rate. Only one of the 15 prospects with those ratios went on to provide a lot of offense in the major leagues. Any guesses as to who this was? It was Prince Fielder in 2002.

20 is the magical age for Rookie ball. Anything older than that and you should at least be in short season A, if not low-A or High-A.

How do 2013 preseason consensus top 190 prospects and early draft picks that played in Rookie ball this year stack up in this analysis?

Travis Demeritte was one of the Rangers 2013 1st round picks. He had extremely high walk and strikeout rates, accounting for 45% of his PAs this year. That is not a bad thing this year, but he will need to cut down on the strikeouts if he graduates to low-A next year.

The Pirates have a lot to look forward to in the minor leagues, and Meadows and McGuire are just increasing the franchise’s outlook.

Things don’t look very good for the guys at the bottom of the chart, but their careers are just beginning. Both Dozier and Palka are a little old for Rookie ball but their ratios don’t look bad otherwise. The biggest red flag (no pun intended) is with Clint Frazier. A 31% K rate is extremely high, reminiscent of Joel Guzman in 2002. Assuming he moves up to low-A in 2014, he will need to both drop his K rate and increase his BB rate to help his chances.

Just two top 190 hitters qualified as here this year and neither rank favorably. Trahan (#129 on the preseason list) is in the bottom five, but the Blue Jays’ D.J. Davis (#138) may have hurt his chances even more, since he is older and had a much higher K rate.

Players who are 21 or older in rookie ball are behind in their development. Historically, the most productive hitters to come out of this level are at the extremes in their approach – either they walk and strike out a lot or don’t do much of either. Oddly enough, the players who are just average at those things have not gone on to have much success in the major leagues.

As with any statistical analysis of minor league players, everything must be viewed in context and compared with scouting reports. However, this should create a basis for conversation on some players. Which other players in Rookie ball caught your eye this year?