Mariano Rivera on the other side of things

Few would argue that Mariano Rivera is the best reliever in baseball history whether they're believers in advanced statistics or not. His time on the mound will define his Hall of Fame career, but his trips to the plate might make for a better story.

Share All sharing options for: Mariano Rivera on the other side of things

Forty years ago, the American League stopped letting pitchers hit. We demanded more run scoring and those lousy pitchers just couldn't satisfy that hunger. So we invented the DH and half of the league's baseball fans didn't have to watch those hapless hurlers try to best their counterparts. In a somewhat connected, but mostly parallel, way, we also saw the evolution of the one inning reliever and the advent of interleague play. As a result of these three forces, relief pitchers pretty much stopped hitting. In 1965, 207 relievers had a plate appearance. In 2013, 124 relievers have had a plate appearance to date, and only 45 have had more than one.

It appears as if among those 124 relievers, only four have drawn a walk and only four have an RBI. There's no overlap. Of course there isn't any overlap, that would be crazy. Relievers are terrible hitters. What are the odds that one of them gets an RBI? Really low. And the odds one of them walks? Also really low. They don't bat often and they likely became relievers in part because their talents skewed toward throwing the baseball rather than hitting it.

Which makes this whole exercise wonderful. Not only do relievers rarely bat, but they rarely drive in runs and they rarely walk. Mariano Rivera has come to the plate four times in his career thanks to an era that doesn't ask him to do so and wouldn't you know it, one of those plate appearances ended in a bases loaded walk.

Mariano Rivera's only career RBI came on a bases loaded walk. He is a relief pitcher. He is likely the greatest relief pitcher of all time. Baseball is crazy. Now this isn't unheard of. In fact, Ramon Troncoso's only MLB RBI is a bases loaded walk and he's a much less accomplished reliever. Rivera doesn't get to be the only one to claim such an interesting feat, but because he's the best at something else and he's about to exit sandman for the final time, it seems appropriate to honor him and who wants to read another piece about his dominance or his amazing ability to use only one pitch? So let's revisit the time that Mariano Rivera walked with the bases loaded.

The Bronx Bombers jumped out to an early 3-0 lead against Livan Hernandez with a two run double from Mark Teixeira and a sac fly from Jorge Posada in the top of the first. The only other scoring came when the Mets pushed across a pair of runs in the 4th inning to make the score 3-2. One run game on Sunday Night Baseball, heading into the bottom of the 8th.

Joe Girardi called on Brian Bruney to get the ball to Rivera, but Bruney walked two of the first three he faced and after getting Fernando Martinez to strikeout, his manager brought the hook. Rivera came on for the four out save and started it off by getting Omir Santos to strikeout looking.

It was a National League park, but Rivera was due up 7th so as long as they didn't mount a rally it didn't really matter that Girardi went to his closer early. I mean, what are the chances that a hit, walk, and intentional walk would bring Rivera to the plate with two outs in the top of the 9th to face the Mets closer, Francisco Rodriguez?

This wasn't K-Rod's best season, but he had just completed a season in which he saved 62 games and parlayed that into a big contract with the Mets. He still had lots of good innings left in his arm and he wasn't far removed from being one of the best relievers in the game. Here he was, pitching to the man who defined greatness at his craft. With the bases loaded. On national television.

He started him off with a 92 mph fastball that missed away. Then another just off the plate at 89. He was behind 2-0 on the other team's closer with the bases loaded. Bad news, but not a disaster. The next two pitches were in the upper 80s and on the outer half of the plate which Rivera watched go by for strikes. At this point, it's pretty clear Rivera isn't interesting in getting cute, he's just hoping something good happens.

Then, something great happened. K-Rod brought 91 right down the middle. Rivera fouled it off. The next one missed way high and it was a full count with the bases loaded and two outs with a reliever on the mound and a reliever at the plate. Perhaps the most appropriate outcome would have been some kind of broken bat single, but we'll have to settle for a very astute take just up and in off the plate. Ball four. Run scores. Rivera goes to first.

This video includes the pitch-by-pitch sequence. Rivera took a nice cut to stay alive and laid off a couple of tempting pitches to work the walk. K-Rod would get the next batter and Rivera would finish the game out easily, but the highlight of the night was certainly when the game's most decorated reliever worked a seven pitch walk to drive in a run. 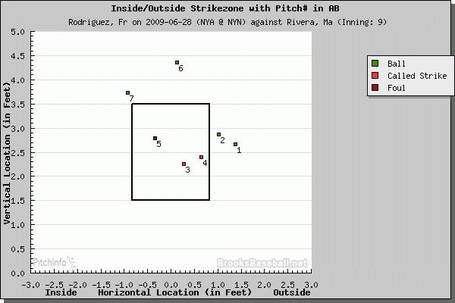 Rivera's Hall of Fame case is as airtight as they come. Amazing numbers, great postseason performance, longevity, and loads and loads of character. It's hard to have a fresh take on one of the most famous living baseball players, but here it is.

All statistics courtesy of Baseball-Reference and Brooks Baseball.