Has Gerrit Cole suddenly changed his approach to include more strikeouts, and does it have something to do with the Pirates as an organization?

Share All sharing options for: Gerrit Cole's spike in strikeouts

This past Thursday, the Pirates beat the Padres 10-1 to collect their 88th win of the season. Gerrit Cole started for the Buccos, and he pitched masterfully. In six innings of work, Cole struck out a career high twelve Padres, walking three, and surrendering just one run. Since his call up to the big leagues this past June, Cole has made eighteen starts, and has thrown just over 111 innings. At six foot four inches tall, Cole's fastball averages out at around 96 miles per hour, putting him squarely in the "flamethrower" category.

Interestingly though, when the Pirates brought Cole up in June, he seemed to pitch well, but he wasn't striking out nearly as many hitters as expected given his electric stuff, including a mid to high 90's fastball and sharp breaking slider. In a piece that came out just before Cole made his big league debut, Tim Williams of Piratesprospects.com wrote,

"In the article by Travis Sawchik linked above, he quotes Cole saying he's not focused on strikeouts, but is focused on getting quick outs. Marc Hulet from FanGraphs also wrote that a scout told him the Pirates pitchers see low strikeout numbers because they're taught to pitch to contact and keep their pitch counts down. Both of these are correct. The Pirates preach "three pitches or less". They focus on getting that first pitch strike, attacking the hitter, and getting guys out using three pitches. If a pitcher's stuff is good enough, he's going to get strikeouts with this approach."

Essentially, the Pirates want outs, no matter how they come, and the team's propensity for shifts and defensive

Does Todd Helton belong in Cooperstown? 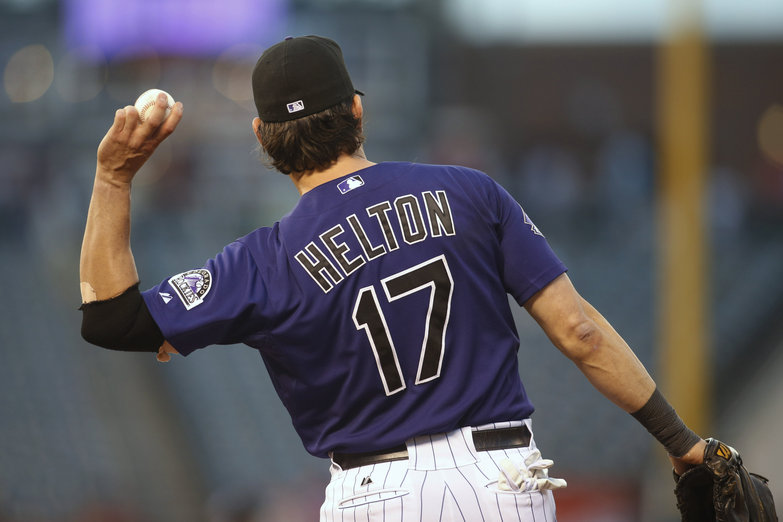 positioning adds more evidence to support that philosophy. Pitchers are always taught to pitch for the strikeout, but often it leaves the pitcher yearning for a strikeout to the point that they attempt to aim their pitches at a specific and difficult part of the zone, leading to more balls than strikes. In addition, the more pitchers keep their pitches in or around the strike zone, the more chances it gives for an adept pitch framer like Russell Martin to keep close strikes as strikes and turn close balls into even more strikes.

Still, the trend through Cole's first eighteen starts is somewhat striking. In his first six starts, Cole struck out a total of 20 hitters, but in the next six he struck out 32, and in his most recent six starts he has struck out 42. Now, this isn't a substantial sample size, but it still follows the maturity of a young talented pitcher as he begins to adapt to the highest level of baseball. Just as a reference, the Pirates have been letting Cole throw more pitches per start, and his walk totals have remained fairly constant.

So, the question remains as to whether Cole's recent success in the strikeout department constitutes merely a natural peak, or if this represents the type of pitcher he will be in the future? From a pitch usage standpoint, Cole relied heavily on his fastball, both the four-seam and the two-seam during his first six starts. This finding is not surprising since many young pitchers with high-octane fastballs will rely on the more easily locatable pitch early on in order to establish some confidence in hitting their spots and harnessing their command.

Since those first few games, Cole has introduced more off-speed and breaking pitches, including a sharp breaking slider, curveball, and changeup. He utilizes his two breaking balls more often to right-handed hitters, saving his changeup to run away from lefties, a common paradigm for right-handed pitchers. Taking a look at his month-to-month pitch usage chart, we can see that Cole started off relying on his two fastball types, then began adding in his three other offerings, but has more recently begun to find a balance amongst his fastball pitches and non-fastball pitches. The one trend that jumps out is the usage of his two-seam fastball, or what is commonly referred to as a sinker.

In the aforementioned article on Cole written by Marc Hulet of Fangraphs, Hulet discusses the four-seam and two-seam deliveries.

"At the same time, a scout told me Pirates pitching prospects typically had underwhelming strikeout rates because they're taught to favor two-seam fastballs - rather than four-seamers - to pitch to contact and to keep their pitch counts down."

So, the general consensus seems to be that two-seam fastballs yield a higher percentage of pitches in the strike zone and thus more contact, leading to fewer balls, fewer walks, and more strikes. Taking a look at Cole's pitches in the zone and out of the zone by month, we see that as Cole thrown a higher percentage of four-seam fastballs in comparison to two-seamers, his zone percentage has dropped, and his strikeout totals have increased. A number of other variables could also have an effect here, but given the original strategy proposed by the Pirates vis a vis pitching to contact, it isn't unreasonable to think a correlation between his four and two-seam fastball usage and his strikeout totals exists.

Interestingly, Cole's two-seam fastball actually gets a higher whiff percentage and whiff/swing percentage than his four-seamer. This finding seems contrary to this article's main hypothesis, but due to the consistent high velocity of his four-seamer, Cole gets far more foul balls when throwing the straighter four-seamer than the two-seam fastball. When it comes to striking out hitters, a pitcher must always get two strikes before even having the possibility for a strikeout, and the number of foul balls Cole induces from his four-seam fastball has aided in getting him ahead of hitters, and has thus led to an increase in his strikeout percentage.

Overall, due to the small sample size of data, and the numerous variables that could be at play, it is difficult to say with any substantial certainty that Gerrit Cole has blossomed from a contact-reliant pitcher to a strikeout artist. One thing that the data suggests is that Cole, in a relatively short amount of time, has and continues to mature as a pitcher. He has gained confidence in his pitches, shows a command of the strike zone, and has done so repeatedly.

The best pitchers in baseball adapt to their surroundings, they modify their game plans towards the situations they encounter, whether it calls for a strikeout or a ball in play. The Pirates system preaches strikes and outs, and while that may seem simplistic and obvious, Gerrit Cole has learned and applied that philosophy quite well. He has above-average zone percentage, z-contact percentage, and z-swing percentage numbers, as well as a 63.4% first-strike percentage. Cole throws strikes, and does so early in order to give himself a clear and overarching advantage over the hitter, leading to outs, whether by strike out, or induced contact. One fact remains certain, and that is that Gerrit Cole has immense talent, and a distinct opportunity to remain atop the Pirates rotation for the foreseeable future.