Does Todd Helton belong in Cooperstown?

For the last 17 years, Todd Helton has been putting together a strong resume with the Colorado Rockies. Will his production be enough to get him into the Hall of Fame?

Share All sharing options for: Does Todd Helton belong in Cooperstown?

After last Sunday's 9-2 defeat in Arizona, Colorado Rockies' first baseman Todd Helton announced that he plans to retire at the end of the 2013 season. That means that for the first time in nearly two decades, the Rockies will take the field to open next year without their franchise cornerstone. The timing of his announcement gives fans a small window of games to say goodbye to Helton, while simultaneously opening up a forum for discussion surrounding his legacy and the big question -- Is Todd Helton worthy of enshrinement in baseball's Hall of Fame? 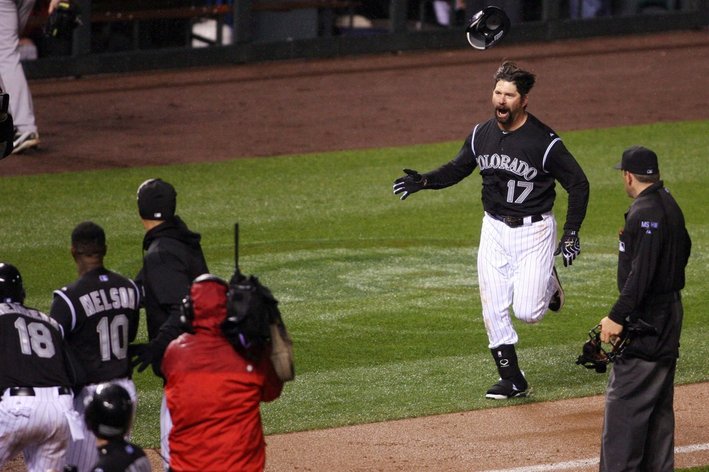 Purple Row looks back at one of the highlights of Helton's career in black in purple.

I imagine Helton's case will be one that is somewhat debated, especially because his extended time at Coors Field poses an obstacle that voters have never really faced with a Hall candidate before. As SB Nation's Mike Bates pointed out yesterday, on one hand, every eligible player that has hit .300 with at least 2500 hits and 300 homeruns has made it, but his road OPS is .856, a fine mark, just not one that is representative of an all-time great.

When talking about the Hall of Fame, one of the best places to start is with JAWS. JAWS stands for Jaffe Ware Score system, and it was developed by Jay Jaffe as a means to measure a player's Hall of Fame worthiness by comparing him to players at his position that are already in the Hall of Fame. Essentially the JAWS score is the player's career rWAR averaged with their 7-year peak rWAR. While the scores should not be taken as a strict rule on which players should make the cut, it certainly gives us a quality objective starting place. Here you can see the top-20 first baseman of all time, along with the average score of the 19 first baseman currently in the Hall.

On this merit alone, Helton scores rather well. He doesn't have the longevity of performance of some of the others, but his 46.5 7-year peak rWAR is the 11th best mark by a first baseman ever, and it trails only Albert Pujols and Jeff Bagwell among players not yet in the Hall. Truthfully, however, his peak was really a five-year span, from 2000-2005, in which Helton very well may have been the best hitter in the league not named Barry Bonds. Over that time he hit .344/.449/.626 with a .447 wOBA, a figure that trailed only Bonds. Even if you want to (correctly) devalue his efforts by adjusting for Coors, his 156 wRC+ was the fifth best mark in the majors, and it put him right between Manny Ramirez and Alex Rodriguez.

What about his place among all position players? Here you can see Helton's all-time ranks in some notable statistical categories:

Again, he measures up rather nicely, except in wRC+, which is the only number listed that happens to be park-adjusted. For that reason, both Bates and ESPN's Dave Schoenfield felt that Helton does not belong in the Hall. From the Schoenfield piece:

For me, Helton falls just under the line. Take away Coors Field, and I wonder if he's John Olerud. That's not meant as a criticism, just that nobody thinks of Olerud as a Hall of Famer.

With all due respect to John Olerud, I don't have the same concerns as Schoenfield. Did Coors field help Todd Helton? Absolutely. Just how much he was helped by the park is up for debate, and ultimately may decide if he is inducted or not. Because he didn't hit any of the major counting milestones, and and he has just five All-Star appearances and zero MVP awards though, he probably should have one for the 2000 season), Helton will have to get in simply on the merits of his regular season production. With the logjam that has already begun on the Hall ballot, it's unlikely that he gets in anytime soon regardless. I'll say that I think it is very close, and very much like Bates, I am ready to be swayed to either side, but if you're asking me if the best Rockies player in the history of the franchise has earned a plaque in Cooperstown, my answer today is yes.