Considering Ubaldo: Is the Indians right-hander an ace once again?

In 2012 and the first half of 2013, Ubaldo Jimenez was one of the worst starters in the major leagues. But, after a string of strong performances in this season's second half, is Ubaldo an ace once again?

Share All sharing options for: Considering Ubaldo: Is the Indians right-hander an ace once again?

It wasn’t too long ago, back before the calendar turned to August, that Cleveland’s Ubaldo Jimenez looked destined for a third straight subpar season. The right-hander hadn’t always pitched this way. Back in 2009 and 2010, for instance, Jimenez had been among the best starters in baseball, posting 5.6 and 6.5 WAR during back-to-back seasons in the hitter-friendly confines of Coors Field.

Yet somewhere along the way, lost amid his herky-jerky wind-up and the bushels of walks that followed, that pitcher, who started the All-Star Game for the National League in 2010, all but disappeared. Just a year after his All-Star appearance, the Rockies traded Jimenez to Cleveland for four prospects, but the righty’s descent into mediocrity wasn't over just yet.

In 2012, Jimenez was arguably the worst starting pitcher in the major leagues. His strikeout rate dipped from a career-high 23.9% in 2010 to 17.8% last season, and his walk rate ballooned to 11.8%, which represented the third-highest mark among starters in baseball. The woefulness of Jimenez’s pitching didn’t end there, however, as his ERA (5.40), FIP (5.06), and xFIP (4.98) all ranked within the bottom five among major league starters.

As 2013 began, Ubaldo’s performances again indicated that the pitcher who had been the best starter in baseball during the first half of the 2010 season was more a figment of the past than anything else. His 12.2% walk rate was the second-highest in the majors in the season’s first half, and nothing was trending in the right direction for the 29-year-old.

But long after Jimenez’s career had appeared to be a lost cause (and his $8 million player option for 2014 a reason for concern in Cleveland), the Dominican hurler began putting up the kinds of numbers we hadn’t seen from him in three years. In fact, one can draw a pretty clear line between Jimenez’s first half and second half in 2013 and see a startling difference in performance:

Other stats, including a discernable spike in velocity throughout the season, point to a legitimate rejuvenation for Ubaldo as well. For example, according to FanGraphs, the right-hander’s 85.7% zone-contact rate in 2013 is his lowest since that 2010 season, while his contact percentage (79.4%) and swinging-strike rate (8.7%) also represent his best marks in those categories since 2010.

So is Jimenez, who was so good in 2009 and 2010 and so bad for two-and-a-half seasons after that, finally back to his previously dominant self? Given his recent spike in strikeouts and dip in walks, can we say that the likely impending free agent has solved his command woes?

One recent article by Doug Thorburn of Baseball Prospectus (subscription required) tried to answer this question, and Thorburn remained skeptical despite Jimenez’s strong second half. He cited the right-hander’s inconsistent release point as cause for concern, and the table below, which shows Jimenez’s release point dating back to July 15th, demonstrates how inconsistent the Cleveland hurler’s wind-up remains. 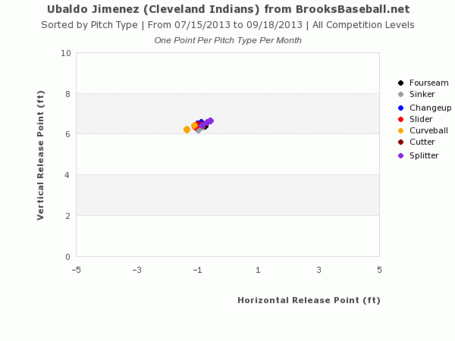 Comparing Ubaldo’s release point from the 2013 second half with his release point in 2010, for instance, is eye-opening and stands as some cautionary evidence for anyone who believes he is the same pitcher who dominated the National League three seasons ago. 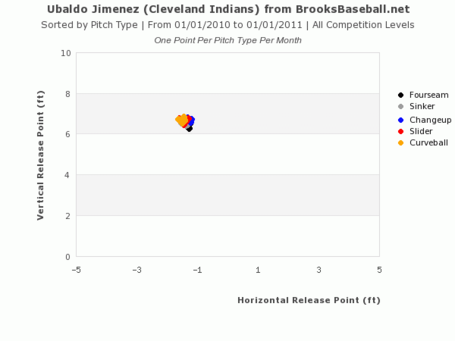 Nevertheless, there is little denying that Jimenez has vastly improved from his poor 2012 campaign. His peripherals (and most importantly, his walks) are trending in a far better direction, and each strong start Jimenez makes provides further evidence that he is closer to the Ubaldo of old than the disaster we saw during his first season-and-a-half in Cleveland.

That $8 million player option now looks certain to be voided, meaning Jimenez will be a free agent this offseason. How MLB GMs view the 29-year-old (he’ll turn 30 in January) will be fascinating. Given his Jekyll-and-Hyde performances over the past few years, Jimenez is far from your normal free-agent candidate, though he has been remarkably healthy throughout his career.

Regardless of how much cash Ubaldo is able to garner this offseason, though, his strong second half has been central to Cleveland’s push for an American League Wild Card spot. Given the team’s easy schedule to finish the season, we may be seeing more of the rejuvenated Indians starter come October.

All stats courtesy of FanGraphs.com.