Ian Desmond has become one of the more productive shortstops in the game offensively, doing so with a growing reputation as an aggressive hitter early in the count. With Desmond's early season vow to be an even more aggressive first pitch hitter, has it produced the desired results of more offense in 2013?

One of these players is Washington Nationals shortstop Ian Desmond, who is among the top National League shortstops in a number of offensive categories in 2013, continuing the offensive onslaught of his breakout season of sorts last year. He is also among the leaders in a couple of plate discipline categories, in particular first pitch strikes (fourth in MLB at 67.4%) and swinging strike percentage (19th in MLB at 12.5%).

As seen with the above stats and also discussed last year here at Beyond the Boxscore by Spencer Schneier, Desmond has never really been what you would call a patient hitter, compiling an impressive number of 0-1 counts, much of it arising from the fact that he swung at a lot of 0-0 count pitches. With the record first pitch strike rate in 2012 also came a lot of offense, to the tune of a 5.4 fWAR, 128 wRC+, and a .362 wOBA, so there apparently was a method to the madness, so much so that Desmond in the preseason made overtures that 2013 would be one where an even more aggressive approach would be undertaken in order to put more balls in play:

So how successful has Desmond been in his ultra aggressive approach toward first pitches in an at bat in 2013 and has it added anything to his already superb offensive capabilities at shortstop, or have pitchers taken advantage of Desmond's increased aggressiveness?

Overall, pitchers haven't greatly changed how they attack Desmond with respect to their 0-0 count pitch types between 2012 and 2013 -- he is still seeing mostly hard stuff, with the only appreciable change being a slight increase in the percentage of cutters seen in this year's 0-0 counts.

Sticking with PITCHf/x results, let's take a closer look at how Desmond is getting pitched to, this time with regards to pitch location in 2012: 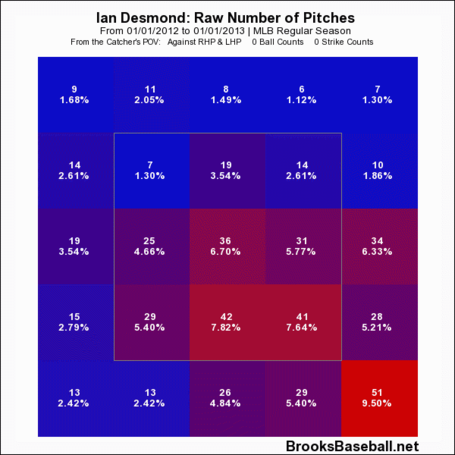 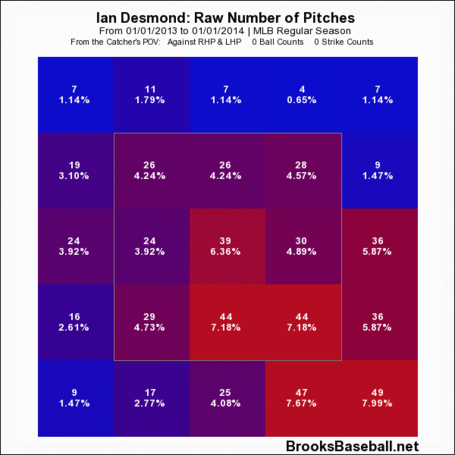 Again, not a drastic change in approach is seen. There does appear to be a slight increase in pitchers attempting to extend the outside corner of the strike zone this season, possibly in order to play off of Desmond's heightened aggressiveness, get him to swing at a ball out of the zone and get strike one quickly or at least induce weak contact and hopefully, a quick out.

The pitcher's side of the 0-0 count ledger has been laid out -- how has Desmond responded?. Did Desmond's penchant to swing at these offerings change between 2012 and this year?

Those pitches just a little outside and down in the zone are apparently are tougher to lay off of for Desmond this year, as judged by the above two PITCHf/x charts.

The above graph lays out Desmond's first pitch swing, foul, whiff, and ball in play rates across 2012, 2013, and his career, with all pitch types collapsed. By the looks of it, Desmond's effort to swing at 0-0 more frequently hasn't panned out as planned, with this season seeing him swing less frequently at the first pitch and also put the ball in play less often as compared to last year or his career. He is also whiffing slightly more in 0-0 counts this year as compared to last -- 12.5 percent this year, compared to 11.8 percent in 2012.

Again keeping all pitch types collapsed, the above graph shows Desmond's production in a handful of offensive categories in 0-0 counts, across 2012, 2013, and his career. With 2013, in spite of an improved BAA and BABIP compared to 2012, Desmond's 0-0 hits haven't been as productive this year.

Let's now breakdown his first pitches by PITCHf/x pitch type; again, we will compare this year to last season as well as his career averages:

Revisiting first pitch swing, foul, whiff, and ball in play rates, now with pitch types, we now see that Desmond is swinging less at all pitches compared to 2012, but continues to whiff at a reasonable number of the change ups and sliders he sees. One worrisome trend we can see is that while Desmond is swinging less often at cutters and fourseam fastballs in 2013, he is also whiffing at them at a higher rate and putting them in play at rate lower than in 2012 and over his career.

From the above graphs, it appears that in 2013, while Desmond does have his struggles with whiffs, when he puts bat to ball, it will usually mean runs. However, we do see 2013 being a tad unkind to the shortstop with regards to his luck with the cutter, suffering career worsts in a number of categories in 0-0 counts with the pitch, on par with his struggles with the split finger fastball seen over his career. This is in stark contrast to his 2012, which saw him pummel cutters. While the data as provided is limited by the fact that it does not show game by game trends with respect to how Desmond is being pitched in 0-0 counts as the season progresses, it wouldn't be surprising to see that the increase in cutters seen are a recent event chronologically and are the product of pitchers pitching to this weakness in Desmond's 2013 0-0 count approach.

With all of that said, how has Desmond's 2013 season -- all counts and at bats considered -- panned out with the purported increased aggressive 0-0 count approach?

On the surface, there isn't much difference between Desmond's breakout 2012 and this year, in spite of the concerted effort to grip it and rip it on first pitch. While he has suffered some mild declines in overall isolated power (ISO) and slugging percentage (SLG) in 2013 -- trending with the drops in ISO and SLG seen in 0-0 counts -- Desmond is still providing a large amount of offense from a position that is typically defense oriented. Looking back to Spencer's questioning as to why Desmond's 0-0 and 0-1 results are in stark contrast to other contemporary hitters, what initially was thought to be noise resulting from one statistical outlier of a season might actually be signal -- signal of a hitter who has embraced taking full advantage of the pitcher's desire to get ahead early in the count, and is swinging early in an at bat. If he can improve upon his struggles with putting the cutter in play while staying true to his career averages against other pitch types in 0-0 counts, Desmond's attack on the first pitch he sees in at bats could prove to be a productive and worthwhile approach, and one that should have him atop the National League hitting leaderboards for years to come.