Asdrubal Cabrera was one of the best offensive players at his position over the previous two seasons, but his new found strikeout problem should push the Indians to move him as soon as possible.

Share All sharing options for: Asdrubal Cabrera strikes out

Entering this season, only a pair of shortstops had hit better than Asdrubal Cabrera over the previous two years. Troy Tulowitzki and Jose Reyes had both posted a wRC+ over 120 and Cabrera's 116 wRC+ placed him third among all SS with 200 or more plate appearances since the start of 2011. The advanced metrics have always questioned his defense, but at the plate he looked to be one of the game's better shortstops. Then everything changed.

All statistics are as of the start of play on Saturday.

Among qualifying shortstops in 2013, Cabrera ranks 9th in wRC+ with 90. That's not a bad number for a shortstop, but it's a 26 point drop from the previous two and Cabrera's bat needs to carry him because his defense isn't great despite his ability to make the highlight reels with some frequency. His 0.1 fWAR puts him ahead of only Starlin Casto and Adeiny Hechavarria among qualifying shortstops.

Cabrera's defense is questionable, but that's not interesting. You may debate those numbers, but the offense is what's different in 2013 and it's different in a pretty odd way. Normally when a player puts up two consecutive seasons that look quite similar (119 and 113 wRC+), the first thing you look for when their numbers change dramatically is a shift in BABIP. But that's not really happening here. Let's take a look:

His BABIP is down in 2013, but it's down less than 15 points from 2011 and 2012. That's not a very big shift for a statistic that we know oscillates over smaller samples. You'll notice that his numbers are down across the board, but it's almost entirely driven by batting average. His OBP is down, but he posted a nearly identical walk rate in 2011. His SLG is down, but his ISO is basically the same as in 2012. His BABIP isn't much different, but he's lost 30 points in batting average. You can find the correlate in the K% column, which has made a big jump. 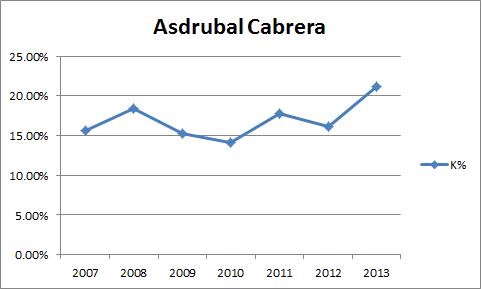 The difference between a 21% K rate and a 17% K rate so far is about 19 strikeouts. If you turn those all into hits, he's at around .285 instead of .240. Even if some percentage were hits, he'd be in a lot better shape. The difference this year is the extra strikeouts, but what's causing them?

Before we get there, here are his first half and second half splits, because they're very strange. Note that he missed time in June, so this is about 270 PA to about 140 PA.

Cabrera struck out more in the first half, but had better results. He's been terrible in July and August, but he's striking out less. He had a strikeout problem in the first half and has a BABIP problem in the second half. With his full season BABIP close to normal and his full season K% way up, it's probably more valuable to consider the season as a whole, but it seems worth noting that as he puts the ball in play more often, his BABIP has gone down. That makes some intuitive sense because he's likely turning what used to be strikeouts into weaker than average contact. It's difficult to be sure, but here it is in the interest of full disclosure.

Also of interest is that Cabrera is swinging at more pitches outside of the zone than ever before and unsurprisingly is making less frequent contact on those pitches. He's also swinging less in the zone and making less contact there as well, which is a pretty bad combination.

Seemingly, Asdrubal Cabrera's issues bleed outward from his strikeout problem and he's made some attempt to change that without much success. His major problem this year is how much trouble breaking pitches are giving him: 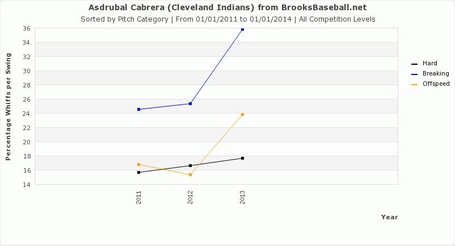 I already showed you that he was swinging more often at pitches outside the zone, but take a look at his Whiffs per Swing from Brooks Baseball. That graphic doesn't need much commentary. He's swinging and missing a lot more on pitches that aren't fastballs and it's especially a problem down in the zone (FYI: There isn't much of a platoon split): 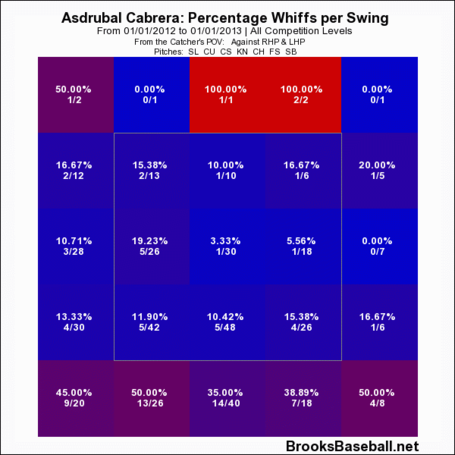 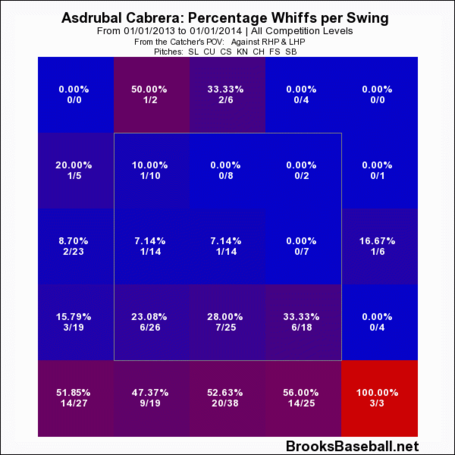 In watching selected at bats from 2012 and 2013, I can't see anything dramatically different mechanically in his swing. It could be pitch recognition or pitchers discovering and exploiting a weakness that has always existed. He's seeing more breaking pitches now than ever before, but that could either be the cause or effect of this season's problem. 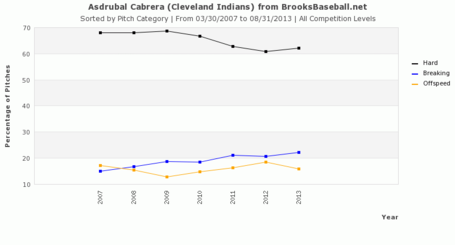 This is an important issue for both Cabrera and the Indians to address going forward as he is due $10 million next season and the very talented Francisco Lindor is charging up through the farm system with some suggesting his MLB debut will happen next summer. With the cost of a win on the open market, the 2011-2012 Cabrera is more than worth the money, but at his 2013 levels it might be worth trying to send him off to a team who is 1) more desperate for a SS or 2) thinks they can fix him.

With the state of the shortstop position the way it is and a top prospect waiting in the wings, the Indians are in a strong position to get good value back for Cabrera because teams who pay less attention to defense and/or have a really poor hitter at the position now will be willing to give Cleveland more than he is worth.

The Indians still have a chance to eek out a spot in the Play-In Game, but as those hopes dwindle and they begin to look toward the offseason, getting something in return for Cabrera could go a long way toward helping them make a run in 2014. His name value is higher than his on-field value right now and with his replacement only a year or so away, it makes all the sense in the world to move him at the first opportunity.