Pirates play & win as a team

The Pirates finally have a winning team, and can taste the postseason for the first time in decades. They've put together a team with few stars and even less imposing talent at every position, but due to the "team work" style of play they use on the field, the team continues to win.

Share All sharing options for: Pirates play & win as a team

Baseball, more than other major sports, lends itself to more in depth dissection and analysis. Events throughout the game involve individuals performing one-on-one actions, like a pitcher throwing a pitch to a hitter. Other sports have every player on the field of play performing some action that affects the outcome of a play, some more so than others. This characteristic of baseball allows us to separate out extraneous details from situations without fear that the questions we ask, the analysis performed, or the results found have little meaning due to the number of concessions taken. Football has many moving parts on every play, making it difficult to separate out the affects of one action from another, but in baseball, fewer of these issues arise.

That being said, while recently watching a number of Pittsburgh Pirates games, I began to realize that the Pirates play a true team game. It may sound cliché, but the Pirates, due to their lack of immensely talented players at nearly every position on the roster, use strategies that help each other out. These strategies are accentuated more greatly when looking at the number of ways the Pirates defense aids the team's pitchers.

The idea of shifting has been around now for a few years, but only recently have we begun to see teams shifting on almost every hitter in the opposing team's lineup. Few teams shift more than the Pirates. The team from Pittsburgh shifts, shades, tinkers, and maneuvers their infielders and their outfielders in order to be better positioned to turn a ball in play into an out. When pitchers strike out opposing hitters, allowing fewer balls in play, the defense, shifted or not, isn't given the opportunity to have their pitcher's back.

This past week, in a game against the Chicago Cubs, Pirates starter Jeff Locke, threw seven innings, surrendering only one run. He left the game with the lead, and the Pirates eventually got the win. Locke, has proven this season, that while he demonstrates enough qualities to make it as a #5 in a rotation, he often struggles mightily with his control (11.7% BB%), and relies heavily on his fielders for help due to his low strikeout totals (17.6% K%). These stats, combined with a low BABIP, good LOB%, and 53.6% ground ball percentage lead to a lower earned run average (3.14) than FIP (3.87).

Locke has been successful this season, and his defense, plays a huge part. The .273 BABIP that Locke currently allows, has luck involved, but many of the hard hit balls, that off the bat seem destined to become a base hit, end up following a trajectory directly to an infielder instead. The Pirates broadcast now frequently shows multiple views of the fielders during at bats, allowing the viewer to see the bunching that comes about due to the shifting of the fielders. Often, as was the case in Locke's most recent start, not long after the camera shows a panoramic or angular view of the field, the hitter crushes a ball up the middle, only to have it find an infielder rather than the outfield grass. The Pirates pitching staff has the highest ground ball percentage of any team in the league at 52.5%, and with the defense in the right position, those ground balls become outs more often than hits.

Does Jonathan Lucroy have the best contract in baseball? 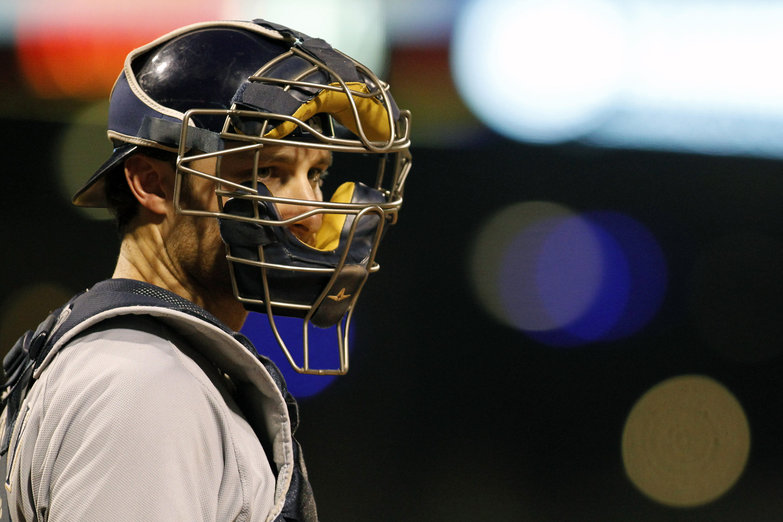 Shifting aside, another recent topic of debate and analysis amongst baseball folk concerns pitch framing. Catcher work incredibly hard on their receiving, as it makes up a large portion of their contributions to a game, but the art of taking a borderline pitch, and doing everything to cause the umpire to call it a strike is now both known and more quantifiable than ever before. Pirates' catcher Russell Martin, known as an all-around top defensive catcher, particularly excels at framing pitches, turning balls into strikes, and keeping not allowing strikes to become balls. The eight fielders behind Locke aid him by positioning themselves depending on the hitter, while the one fielder in front of him aids him in a similar positioning manner. Take a look at Locke's few strikeouts from his recent game against the Cubs and look at how often Martin uses his set up prior to the pitch, lack of body movement, and timing to receive the pitch in a manner than will cause the umpire to more likely call the pitch a strike.

Framing and shifting aren't anything new to the game. The Pirates utilize these tools to a great extent, which has helped turn a young, inexperienced, and less talented team than other playoff contenders into a winning machine. The Pirates don't trot out five starting pitchers who rack up strikeout after strikeout, and instead of hoping that the many balls put in play happen to go to fielders in their normal positions, they change things up to help out the pitchers on the mound. Similarly, they have championed the idea that it is the combination of the pitcher and the catcher facing off against the hitter, as opposed to the antiquated notion that the pitcher battles the hitter mono a mono. The Pirates have turned what has been thought of as a game made up of many individual match ups and events into one in which the team as a whole works together to defeat the opponent. Whether these changes only affect the outcome of plays or if it begins to seep into the culture of the clubhouse remains to be seen. Still, the Pirates have, through modern methods, turned a one-on-one style of play into a team battle, which makes for some very compelling baseball.