On the verge of the playoffs, the Dodgers have their eyes on the prize, but soon they will face questions at multiple infield positions.

When the 2014 season rolls around, the Los Angeles Dodgers' lineup card will look fairly similar to the 2013 model. Matt Kemp will presumably have a clean bill of health, and resume his responsibilities in the outfield, which might make Andre Ethier the odd man out, but for the most part things will have remained the same. The infield will consist of A.J. Ellis behind the plate, Adrian Gonzalez at first base, and Hanley Ramirez at shortstop. This leaves two vacancies, one at third base, and the other at second base.

This season, the Dodgers have used an amalgamation of Juan Uribe, Mark Ellis, Nick Punto, Skip Schumaker, and Jerry Hairston Jr. at those two positions. Uribe, Schumaker, Hairston, and Punto's contracts all end following the conclusion of the 2013 season, and Ellis has a team option for the 2014 season worth just under $6 million, but can have the option bought out for just $1 million. Basically, LA will have no security at two vital positions, and must use the time during this upcoming offseason to fill those spot.

When perusing the list of impending free agents, under the categories for second base and third base, we find a list of mostly unexciting names, save for one or two.

After Robinson Cano, this list has a Grand Canyon style drop off. Sure, Omar Infante provides some nice value, and Kelly Johnson has had a solid season in Tampa, but neither of those players will provide more than a maximum of 3 fWAR per season going forward. Ben Zobrist's name pops up, but he has two $7 million team options, one for 2014 and the other for 2015, and given his tremendous value, the Rays will undoubtedly pick up both options.

The great minor league player of the year debate 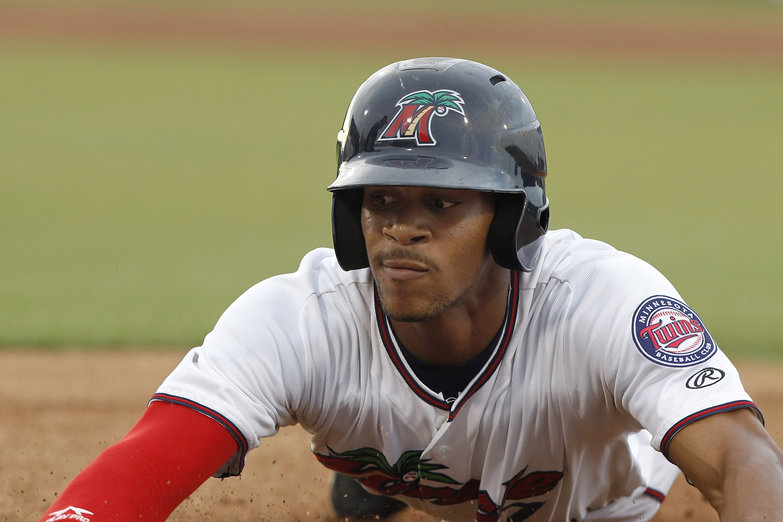 Who's been the best this year on the farm? Andrew discusses further.

That leaves the Dodgers, an immensely talented team with an ownership willing to do almost anything to win, with three distinct options. The first option involves bringing Mark Ellis back to play second base by picking up his option, and looking to the trade market to fill the vacancy at third base. The second has the team once again bringing back Ellis, but looking within the organization, probably the minors, to fill the spot at third base, while the third involves letting Ellis leave and looking to the trade market and the minor leagues to fill both spots. A fourth option of moving Hanley Ramirez to third base, and instead pursuing shortstops remains a possibility, but after continually exhausting the Dee Gordon option, and the lack of impact players in the free agency market for shortstops, that seems like a less likely scenario.

First, let's look at Mark Ellis. Since joining the Dodgers in 2012, Ellis has played well. When breaking down his value into the three main components, hitting, defense, and base running, we see that Ellis provides his value predominantly through his defense. He has never posted a UZR or DRS below 1, and has a career FRAA of 64.7, all of which shows positive defensive consistency. Apart from defense, Ellis acts a fairly league average hitter with a career wRC+ of 95 and career TAv of .262, and league average base runner with an 18.7 career UBR and 0.7 career wSB. He's a commodity worth owning, but his value to a team with deep financial pockets might come as a utility man, not as a starter. As a side note, were the Dodgers to buy Ellis out of his 2014 option, he could provide another team in need of a second baseman with solid production at a low cost.

Ellis' numbers are nice, but if the Dodgers wanted to upgrade at second base, and do so with ease, the simplest way would be to let Ellis leave, and sign Omar Infante, a better overall player than Ellis in all three departments, to a contract. Infante has better hitting numbers, comparable defensive, and slightly better base running numbers than Ellis in the last few seasons, but given the market for second basemen, Infante may wind up fiscally overvalued. More importantly, the Tigers, for whom Infante has now played twice in his career, will most likely pursue resigning him more ardently than other potential suitors.

So, Mark Ellis has value, and given with a team option worth $5.75 million, he seems like the perfect candidate to return to the team and man second base. That leaves an empty spot at third base, a paltry free agent market at third, and a dwindling number of options from which to choose. Before moving on, let's settle one fact. The Dodgers have little going for them in the minors as far as infield positions goes. Corey Seager, their 2012 1st pick out of high school has a lot of upside, and according to Dodgers GM Ned Colletti, was drawing a lot of interest from other teams, but he remains several seasons away from bursting onto the MLB scene, by which time he may not even still play shortstop. Other than Seager, the Dodgers could still attempt to trot out Dee Gordon, but that experiment seems to have less and less opportunity to produce beneficial results.

So, what could the Dodgers do via the trade market to fill one of the spots on the left side of the infield? Third base has to be the key spot because Hanley Ramirez's ego may take serious umbrage to another move to third base, on top of which, he has performed better overall as a shortstop. Still, let's keep the possibility of him moving to third as semi-viable. That brings me to a potential trade, one involving the White Sox. Prior to the trade deadline, White Sox shortstop Alexei Ramirez found himself drawing serious interest from various teams, but in the end, he remained in Chicago. Ramirez will make $20 million over the next two seasons, with a team option for a third. He is currently 31 years old, and, like Mark Ellis, has made his mark on the league with his defense.

Ramirez has posted positive UZR and DRS marks for five consecutive seasons, including a tremendous defensive year in 2010 in which UZR, DRS, and FRAA had Ramirez as a top defensive shortstop in all of baseball. He has speed, as well as smarts on the base paths, posting a career UBR of 17.7, and a career high 30 stolen bases in 2013. Like Ellis, Ramirez has never shown great hitting abilities, posting a career wRC+ of 88, TAv of .253, and a recent attrition in power (two consecutive seasons with ISO's below .100). Trading for Ramirez while simultaneously bringing back Ellis would give the Dodgers a formidable defensive duo up the middle, and wouldn't constitute a decrease in overall hitting from this season. The issue remains, that if the Dodgers are to look towards a trade to fill these infield gaps, is trading for Ramirez the optimal option?

That leaves finding a suitable trade option at third base, and keeping Hanley Ramirez at shortstop. Three specific players that come to mind include Red Sox third baseman Will Middlebrooks, the Padres Chase Headley, and Cardinals third baseman David Freese. Middlebrooks has had a very up and down season in 2013 with the Red Sox. With Xander Bogaerts nipping at the heels of anyone playing on the left side of the Red Sox infield, and a significant drop off in offensive production, Middlebrooks hasn't lived up to his rookie campaign. In 2012, he put up a 122 wRC+, but did so in only 286 plate appearances. This season, despite spending time in the minor leagues and on the disabled list, Middlebrooks has accumulated more plate appearances, 324, but has only mustered a wRC+ of 91. The dip in his hitting is also seen in his BABIP, which has fallen from .335 to .272. His BB%, K%, and ISO have all remained very similar to his 2012 stats, meaning that Middlebrooks seems to have similar patience and selectivity at the plate, hasn't lost his power stroke, but still hasn't produced in a similar manner. Middlebrooks doesn't have enough defensive data to get a very accurate view of his abilities, but he seems to man the hot corner with enough efficiency to have the Red Sox put him out there.

Middlebrooks is under team control for the next 5+ seasons, meaning that the Red Sox have no reason to move him, especially since Stephen Drew's contract ends at the end of this season, and Bogaerts' natural position is shortstop. Still, if the right deal came along, Ben Cherington would listen and even contemplate moving the young third baseman. The Dodgers have made deals with the Red Sox in the past, and have a solid stock of pitching in their farm system, possibly enough to intrigue the Red Sox. This deal has some potential, but the Dodgers will have to be the driving force since the leverage seems to lie in New England.

The Padres find themselves in a fascinating situation with third baseman Chase Headley. Headley was one of the best players in baseball in 2012, both offensively and defensively. The Padres have made it known that they want to make Headley a top component of their future plans, but after a very slow start to 2013 combined with a fractured thumb, Headley's price may now surpass what the Padres would be willing to spend. 2014 marks Headley's final year of arbitration before becoming a free agent in 2015, but both the Friars and any team that might acquire him would most likely want to avoid the impending free agency by signing the third baseman long term. Given the Dodgers' impetus to get the best players despite the cost, the most likely scenario would involve trading for Headley only to negotiate a contract with him to remain in LA for years to come. While this would constitute an intra-divisional trade, if the Dodgers fork over enough in return, they could pull it off, and cement themselves as a playoff team for the next few seasons.

David Freese has finally come back to earth. Well, maybe he never left, but for a moment in the 2011 playoffs, Freese went straight from human to Super Saiyan. Freese put together two solid seasons in 2011 and 2012, putting together a wRC+ of 127 and manning third base with just above-average defensive stats in FRAA and UZR. Freese is under team control until 2016, but the Dodgers might find a better deal for him by buying low and hoping that 2013 constitutes an aberration. In addition, the Cardinals have the flexibility to move Freese by putting Matt Carpenter at third and allowing Kolton Wong to man second. Wong and Freese have essentially been platooning in the infield recently for the Cardinals because of Freese's lack off production, and to get a better look at Wong in the majors. The Cardinals have a stocked farm system, but adding to it by dealing Freese could realistically be on the front office's radar screen come the offseason.

The Dodgers have some options to fill the impending voids at third and second base. One option not previously discussed would involve resigning some mix of the players that will soon become free agents like Nick Punto and Jerry Hairston Jr., but the Dodgers seem like a franchise that never wants to do anything adequately, instead choosing to go for the gold. Making a move for a third baseman or even making a play for Robinson Cano as a free agent would fit into the Dodgers' recent persona, and would certainly make give the offseason some flare.