The great Minor League Player of the Year debate

With the minor league season all but done, it's time to talk about the great seasons of George Springer and Byron Buxton.

Share All sharing options for: The great Minor League Player of the Year debate

As the season approaches its final days, it appears that the time to discuss awards is on us yet again. In the past weeks here at Beyond the Box Score, there have already been articles on the NL Cy Young cases for Clayton Kershaw and Matt Harvey, as well as a visual representation of the AL MVP race, with more content to follow I'm sure. But today we're not interested in major league awards given out to big league players. Instead, I want to look at what was an extremely close race between Astors' outfielder George Springer and Twins' outfielder Byron Buxton for Baseball America's Minor League Player of the Year award, with the award going to Buxton earlier this week. 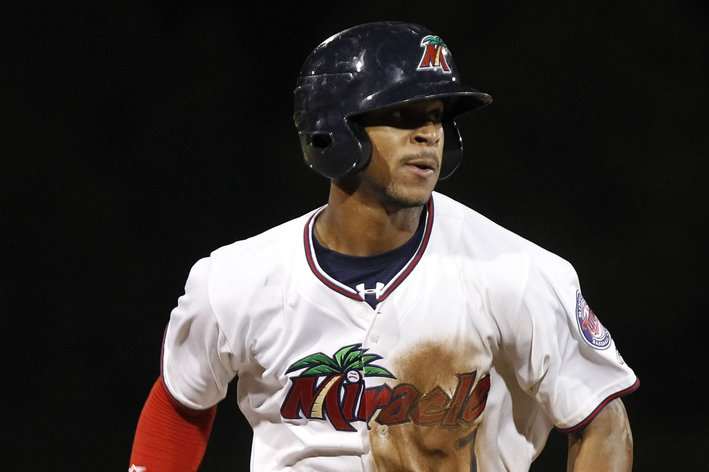 Want to read more on Buxton's win and fantastic season? Twinkie Town has you covered with all the details.

Now, just as the MVP award is not traditionally considered a "best player" or best "statistical season" award, the BA POY of the year award comes with a certain element of subjective-ness as well. Basically the award has to be given to a prospect, and an elite one, that also happened to have a great season season as well. So apologies to Twins' first baseman Chris Colabello, but he was never really a contender for the honor despite hitting .352/.427/.639 with 24 homers and having a backstory made for Hollywood. Of course there were some other top prospects who had strong cases, namely Cubs' shortstop Javier Baez, Red Sox' shortstop Xander Bogaerts, and Buxton's teammate, Miguel Sano, but ultimately the two outfielders separated themselves from the pack. So the question becomes, did BA make the correct choice?

As an objective analysis-driven site, it seems natural to start with the numbers both players put up this season.

In the comments of the BA article and on Twitter, the general feeling seemed to be that Springer's numbers were far surperior, though that doesn't look to be the case. While Springer has a big edge in homeruns (37 to 12) and isolated power (.297 to .186), Buxton still posted respectable totals in both categories considering the run environments in the Midwest League and Florida State League are much more pitcher friendly than the Texas League and the PCL.. Add in his minor league leading 18 triples, and his advantages in steals, batting average, and on base percentage, and really their production was quite similar.

A strong argument can be made that Springer's numbers should hold more weight since they came against much more advanced competition, and that he actually improved his walk and strikeout rates after being moved up to Oklahoma City. Then again, he's also a 23-year-old with a full season of pro ball under his belt entering this year, whereas Buxton was the sixth youngest player in High-A after getting just 189 plate appearances last year.

A stronger argument for Springer is the uniqueness of his season. Had he been able to hit three more homeruns, which looked like a near lock thanks to his torrid pace down the stretch, the UConn product would have become the first minor league player to post a 40-40 season in the modern era, which dates back to about 1950. From the BA article, Springer's season does rank as the best power-speed season of the last ten years, making his numbers stand out just a bit more. Really though, it's hard to argue with either player based on simply the totals put up at the plate.

Which brings us to the second criteria of the BA award, the scouting reports and the pedigree of the players in question. We will start again, somewhat objectively, and look at both player's preseason prospect rankings as well as their midseason updates.

Well, I'd say that's a much more decisive victory for Byron Buxton. Rarely do you see consensus among the top experts regarding prospects, but halfway through this season nearly everyone deemed the five-tool centerfielder the top commodity left in the minors. Springer comes in as no slouch, ranking within the top-30 everywhere, yet he also doesn't crack any top-10 lists.. It will be interesting to see if that changes this offseason, with the improvements he made at Triple-A. For now, however, Buxton and Springer are in different classes when it comes to prospects. To better illustrate that point, just look at the difference in what is said about the two players. First, here is John Manuel's take on Springer from a recent BA chat:

From the scouts to the stats, Springer feels like he'll be a mix of Mike Cameron and Matt Kemp. He probably will be a bit more offensive and not as elite defensively as Cameron, but the point of the comp is, unless he makes a major adjustment on the ball on the outer half and start using the whole field, he's a five or six-hold hitter, not a true three or four-hold hitter on a championship team.

Mike Cameron was a very good player, one that had a career wRC+ of 107 and tallied 49.7 career fWAR, thanks largely in part to his defensive prowess in centerfield. If Springer does turn into Cameron, the Astros should consider themselves rather lucky, but then again that's not a Hall of Fame type talent. Compare that to what BP's Jason Parks heard from scouts and executives on Buxton:

Buxton is the best player I have ever scouted in the minors...

He's Eric Davis with a better bat. It would be great for the game if Buxton becomes Buxton.

Buxton is going to give you an up the middle presence with a loud package of tools that could make him the top player in the game. We have an internal comp to Mike Trout, but the tools might be even louder at full potential.

Some of you may have forgotten how great Eric Davis was and could have been if not for the injuries (career 126 wRC+, 282 homers and 349 steals in just 1626 games), but I'd bet most of you are familiar with Mike Trout. The guy who is having his second straight 10 win season as a 21-year-old. For that reason alone, I'm skeptical about the Trout comparison -- Mike reached the big leagues at 19, while Buxton is still in high-A -- but the fact that some evaluators and teams think that gives it some serious weight.

Adding the performance on the field to the reports and the rankings, it's actually quite clear that Baseball America made the correct choice. When the top prospect in the game has a season like Buxton just did, you give him the hardware and you don't think twice about it. Which brings us to one final question -- what does it mean to win the award?

Below you will see a list of every recipient of the honor, along with their career fWAR total.

Basically, it doesn't mean a whole lot. There are some big hits in there (Frank Thomas, Manny RAmirez, Derek Jeter, Mike Trout) as well as some substantial misses (Ron Kittle, Rick Ankiel, Jon Rauch, Delmon Young). That's not terribly surprising given the bust rate of prospects, even the top ones. So in the grand scheme of things, winning the award doesn't really mean anything for Buxton, and losing it doesn't mean much for Springer, both things I think we probably already knew. The reports tell us much more about their future, and judging by them, the selection of Buxton over Springer gives Baseball America a better chance at adding another Hall of Famer to the their list of award winners. Only time will tell on that, however.