A PITCHf/x Profile of Adam Wainwright

In 2006 a young right-handed reliever took the playoffs by storm. Since then he's been one of the best pitchers in baseball.

Share All sharing options for: A PITCHf/x Profile of Adam Wainwright

It's worth looking back at the numbers. The St. Louis Cardinals were battling the Tigers for a World Series, and one of the key cogs was a young reliever by the name of Adam Wainwright. That postseason Wainwright posted some absurd numbers. Here are just a few of them:

The Cardinals moved Wainwright to the rotation in 2007, and he rewarded the reigning world champions with 200+ innings of 3.70 ERA ball. That would also be the last time Wainwright posted a WAR below four in a full season (In 2008 Wainwright only managed 2.4 WAR over just 132 innings).

In 2013 Adam Wainwright might post a new career high in WAR, but he fails to receive as much press as other aces like Justin Verlander or Clayton Kershaw. No, he hasn't put up an 8-WAR season like Verlander, nor does he have a career ERA below 3 like Kershaw. What he does have is a strong career in which he's put up over 27 WAR in 8* seasons, and a reputation as one of the best postseason pitchers out there. Save for a lost 2011 season, the Cardinals have been able to count on Wainwright to be a key cog in their rotation, providing 200 innings of ace-level pitching year in and year out.

*2005, counted for the purpose of this statement, saw Wainwright throw just two IP.

How Does He Do It?

Over the course of his career Wainwright has been primarily a 3-pitch pitcher. Roughly 87% of the pitches thrown by 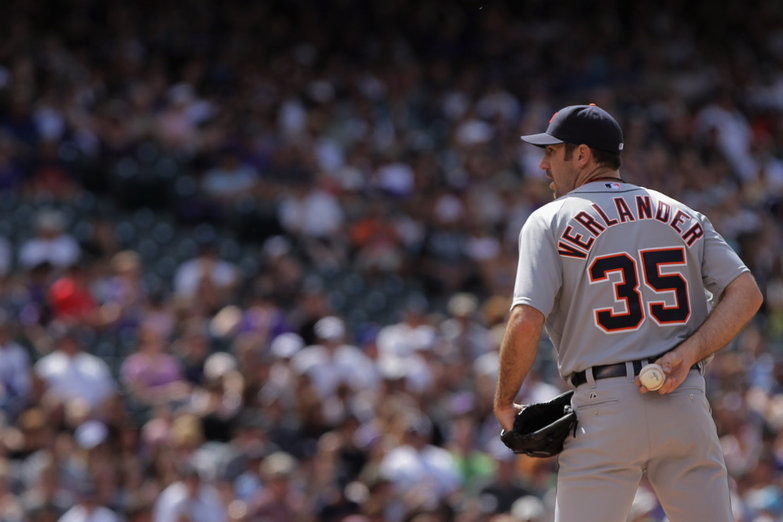 Wainwright were either sinkers, curveballs, or cutters. The sinker was Wainwright's "fastball" of choice, and he threw it over 42% of the time. Next was the curveball, which he threw almost 25% of the time. The 'big 3' in his repertoire was rounded out with the cutter which Wainwright used a little more than 20% of the time.

The other pitches in Wainwright utilized were a four-Seam fastball and a change up. Each pitch was used almost 6.5% of the time.

In 2013 however, Wainwright has begun to shift his approach to include fewer sinkers and more four-seam fastballs. The cutter has also seen increased usage, and is now the most used pitch he throws. He's become more of a four pitch pitcher with the results proving overwhelmingly positive. Take a look at the chart below for Wainwright's pitch usage and movement stats from 2013:

The image above, courtesy of Brooks Baseball shows that Wainwright has taken a much more balanced approach to pitching in 2013. He's able to use all 5 pitches because each serves a distinct purpose. Wainwright doesn't try to fool the hitter or surprise him with his pitches. As you can see below, his pitch usage percentages are pretty much exactly what you would expect to see if a guy took a common sense approach to pitching: 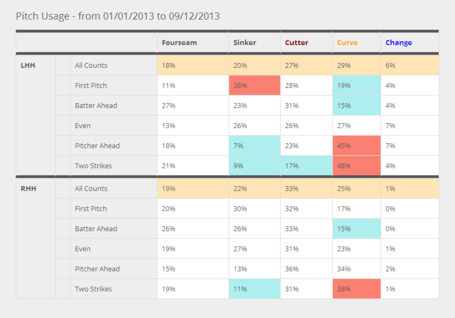 Early in the count, or if the batter is ahead, Wainwright throws a heavy dose of sinkers, four-seamers, or cutters. All three of those pitches have minimal movement, and allow Wainwright to pound the strike zone. When ahead in the count, he leverages his curveball to put batters away, regardless of handedness. The red boxes above indicate that he throws the pitch 10% more than his season average in that count, while the blue boxes indicate that pitch is thrown 10% less than usual in that count.

The curveball is the key to Wainwright's success, and it's easy to see why. First, it's the only pitch of the four main pitches that features a significantly different profile as you can see below. The plot below features his pitches with velocity on the y-axis and horizontal movement on the x-axis: 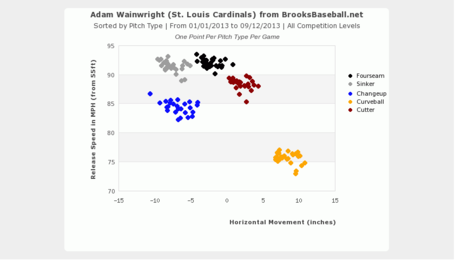 The curveball is crucial to Wainwright. His cutter, sinker, and four-seam fastball all come in between 88 and 92 mph, with only slightly varying degrees of horizontal movement. The curveball on the other hand sits at 75.67 mph and features 8.38 inches of horizontal break. Wainwright uses it almost exclusively down in the zone, and is very successful with getting whiffs off his curve. Below you can see just how effective he is at getting that swinging strike: 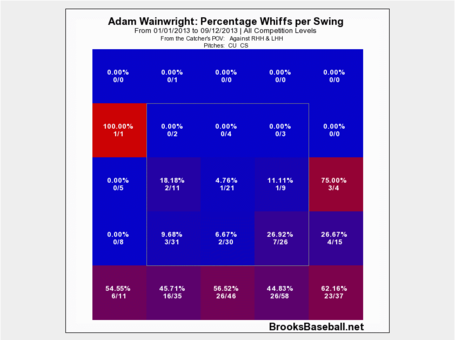 The bottom row of zones, all below the actual strike zone, feature high whiff rates when Wainwright uses his curveball. As you can see, the lowest whiff percentage out of that group is 44.83% which is from 26 whiffs on 58 swings. Those other swings, the non-whiffs, well, they probably result in ground balls... 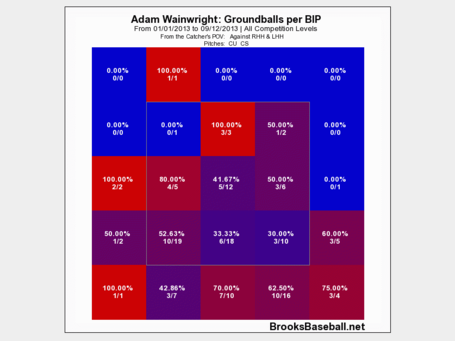 At the end of the day, Adam Wainwright goes into at-bats with the hitter knowing exactly what he's going to do. He attacks the zone early with hard pitches (four-seamer, sinker, cutter) and then looks to finish batters off with his breaking ball once he's gotten ahead. Wainwright's curveball is the true key to his success. Batters are likely to either strike out or hit ground balls against the pitch, as exhibited by the .177 batting average or .222 slugging percentage in those situations.

When a hitter steps into the box, he knows what's coming. The funny thing is, Wainwright remains confident that if he executes properly, the hitter won't be able to hit it anyway.

All stats and charts courtesy of Brooks Baseball and Fangraphs.