Can you dig it: a look at first basemen scoops

The ability of first basemen to adeptly field throws that lack accuracy and precision and turn would-be errors into outs is a skill that is occasionally overlooked due to the position's reputation of being manned by players defined by 'all-hit, no-glove' capabilities. While not a talent emphasized by most defensive metrics, a first baseman's prowess at scooping bad throws is nonetheless a desirable, yet unheralded skill.

Share All sharing options for: Can you dig it: a look at first basemen scoops

Fans of the Washington Nationals are witness to the occasionally balletic fielding prowess of Adam LaRoche. Never highly regarded by the likes of such defensive metrics like Ultimate Zone Rating per 150 games played (UZR/150) or Defensive Runs Saved (DRS), LaRoche nonetheless displays a panache for stretching and contorting his body in an effort to snag the occasionally wayward throw from his fellow infielders, of which there have been many this season. Playing alongside erstwhile Gold Glove third baseman Ryan Zimmerman, who's struggling with his throws post shoulder surgery to the tune of 15 throwing errors and shortstop Ian Desmond contributing 10 throwing gaffes of his own this year -- ranking first and tied for third, respectively, in the MLB -- LaRoche's ability to pick up his teammates and make those bad throws outs ranks him sixth in the MLB in the stat scoops.

Scoops, devised by Mitchel Lichtman and presented in a 2009 Fangraphs article, is an effort to tally up all of those errant throws, be they in the dirt or just poorly thrown and off line, and provide another measure of a first baseman's defense abilities. While not a component of UZR*, it is included in Runs Saved; regardless of the defensive measure used to evaluate a player's defensive abilities, scoops do not play a large role in the overall defensive package for a first baseman -- typically no more than a two to three runs spread separates the iron gloved first baseman from one with superior scooping ability.

In spite of its small contribution to what eventually paints the picture of the position's defensive value, a scoop nonetheless is one of the more tangible aspects of a first baseman's defensive game around the bag, due to the athleticism involved to make a scoop successful as well as the typically bang-bang play that commonly involves a rushed, off balance throw from an infielder. While ultimately things such as fielding range, the ability to turn a double play and fielding bunts carry more weight in the overall grading of defensive ability at first, scoops still carry some weight and provide some of the more glove averse players a sliver of defensive contribution and a reason to put them at the position, especially if their offense is above average.

With this brief introduction to scoops and the plight of players such as LaRoche in mind, who are the kings of scoop?

Here are the top ten (well, 11) players in total scoops for this season, and their DRS and UZR/150 scores for reference. All players in this and following tables have played a minimum of 450 innings at first base for a given season:

Only putouts from outs made at first base are tallied and used for the 'Pct_Scoops' average.

For 2013, we see a reasonable amount of spread across the defensive spectrum of first baseman -- some 'good glove' first baseman are mixed in with some surprises. We also see how small of a percentage scoop plays are in the grand total of putouts made via the force out, before unassisted plays and fly outs and line outs are considered.

For some historical perspective, here are the top ten best seasons for total scoops since 2002:

Scoop data was initially collected in 2002, but wasn't consistently provided until 2004.

When only considering completed seasons, the top ten rate seasons look like this:

...and again, just for comparison purposes, the DRS and UZR/150 of the players from the previous table:

Looking across ten years of data and tallying the number of times a player produces a top ten finish in any of the three categories discussed -- UZR/150, DRS, and scoop rate -- we get the following:

This table provides us the idea even when looking at defensive stats from a yearly and cumulative perspective, we see how having good scooper skills doesn't necessarily equate to being a top flight defensive first baseman. However, it is a skill that appears to be a part of the overall package of the better defensive first baggers.

Keeping with the cumulative perspective -- how do average scoops and scoop rate differ across year? 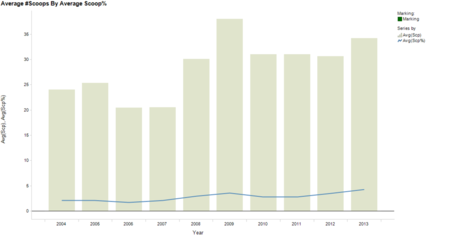 With this graph, we see scoops and scoop rates on the rise; correlating both variables with year, both come out with statistically significant increases and R-squared values of 0.21 and 0.39 for number of scoops and scoop rates, respectively. This trend was foreshadowed in the third and four tables, with many of the seasons listed being from the current season.

As mentioned before, scooping isn't a highly valued skill -- it provides such a small amount of value across a season as compared to other aspects of first base defense and is highly dependent upon a number of variables related to the other infield positions. In particular, scoop rate is inevitably tied to the throwing ability of a first baseman's fellow infielders, as well as their range. A first baseman who plays with an infield with poor arms, be it in terms of accuracy or strength, will tend to have more opportunities than a first bagger playing with an infield that displays both strong an accurate arms. Pitchers also play a role in the scoop stat, as groundball rates will play a role in scoop opportunities as well; theoretically, the more ground ball pitchers you have on a roster, the more opportunities a first baseman will have for scoops. In spite of its low priority status in the pecking order of defensive stats for the first base, the scoop will remain a hallmark of the position and will continue to provide a little flair to an otherwise overlooked defensive position.

*FanGraphs articles discussing scoops state that it is not included in UZR; however, these articles are from 2011 and beyond. A reference to it being included in UZR was recently made by Dave Cameron in a FanGraphs chat (5/29/2013), but no other discussions confirming its inclusion into recent iterations of UZR have been found.

All data courtesy of FanGraphs and Baseball-Reference.