Down in Miami, Jose Fernandez is putting together a great rookie year, but just how does it stack up against other pitchers across the years?

In the age of 24/7 news cycles and instant updates on everything, it's a bit hard to fathom that any topic truly lacks the coverage it deserves. Yet, right now Miami's Jose Fernandez is submitting one of the best seasons by a 20-year-old pitcher ever, and it seems that no one is talking about it. Maybe the accomplishments of Mike Trout and Bryce Harper have numbed the baseball world to any other extraordinary rookies, or perhaps this is a case of the proverbial "if a tree falls in the forest and no one is there to hear it" situation with the Marlins drawing under 20,000 fans a night. Whatever the reason may be, Fernandez deserves much more attention that he has received thus far.

Now, I would be remissed if I didn't point out that almost a month ago today, our own Alex Kienholz wrote about how impressive the young hurler has been. Why bring it up again? Along with my apparent love for rehashing old ideas, Fernandez was fantastic in the month of August, delivering a 1.15 ERA, and a .198 wOBA-against over 39 innings, making his place in history look even a bit better than it did at the end of July.

After his phenomenal August, Fernandez's 2.33 ERA trails only Clayton Kershaw and Matt Harvey among qualified pitchers, and he also ranks in the top-10 in FIP (2.69, sixth), xFIP (3.01, tenth), and strikeout rate (27.5%, fourth). Considering the surplus of quality big league pitching right now, and Fernandez's lack of experience above Hi-A entering the season, those numbers are quite remarkable.

Truthfully, however, what we're really after is his place in history. If we look at Fernandez simply as a rookie, his current 3.9 fWAR would constitute the 82nd best season since 1900, a span that covers more than 1500 pitcher seasons. But really what does qualifying as a rookie tell us about a player? Other than making it clear that the pitcher had yet to log 50 innings in a big league season, it really doesn't give us any information, and the list includes pitchers like Hideo Nomo and Yu Darvish that really aren't comparable to Fernandez. A much better way to examine his place in history is to compare him to other 20-year-olds, especially taking into account what we know about age and future performance. Looking just at 20-year-olds, Fernandez already has put together one of the ten best seasons since 1900.

ZiPS rest of the season projections has Fernandez finishing the year with 4.2 fWAR, placing him into the eighth spot, but due to the lack of innings compared to his peers, it seems unlikely that he can climb any higher than that. Still, on a rate basis, he has the second best ERA- and FIP-, trailing only Doc Gooden's unbelievable 1985 campaign, and his strikeout rate represents the top mark even if it its largely due to an inflation in whiffs in today's game.

Looking at the above list, certainly Fernandez is having the best season for a pitcher under the legal drinking age since 1985, but how much better has been than his competition. Here is the list of every 20-year-old that has thrown at least 90 innings in a season since 1990.

Whoa, now the separation is even more apparent. Fernandez likely will likely finish the year a full win ahead of any other 20-year old in the last 20+ years. Just like Alex, I thought it was somewhat questionable when the Fish announced he would be in their rotation to begin the season, but they could not have been more right. Obviously sending him to Double-A or Triple-A would not have presented much of challenge, seeing that big league hitters haven't even proved to be much for him to handle.

The most amazing part to me, however, is many times we see young players take the league by storm before the opposition has a chance to adjust. Pitchers like Josh Collmenter have had some early success before the "book" got out on them, yet Fernandez has almost been the opposite. Here you can see how has performance has changed by month. 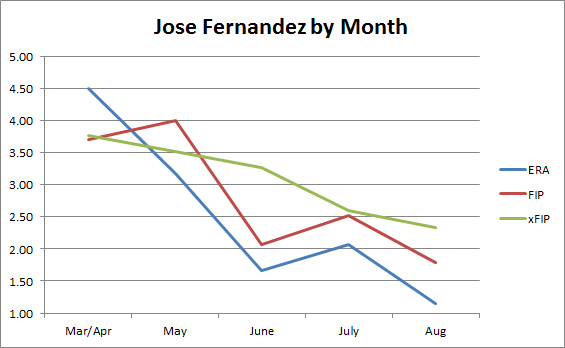 From the graph, we can see that it may have been Fernandez that needed an adjustment period, and since then he has quite possibly been the best pitcher in the league. Along with the drop in run prevention, his strikeout rate has increased steadily from 22.6% in March and April to over 32% in August, and his walk rate has dropped from 10.8% to under 7.5%. Due to a lack of innings, Fernandez won't be mentioned in most Cy Young conversations, but he probably should be, pointed out just earlier this week by Stuart Wallace.

Really, any way you slice it, what Fernandez has done and is continuing to do in 2013 is astonishing and I am excited to see what he can do in coming years. As you can see from the company he is already in, the range of outcomes includes first ballot hall of famers as well as somewhat replacement level centerfielders, but no matter what he ends up, he will always be one of the best 20-year old starters the game has ever seen.