B.J. Upton may have signed a lucrative deal in the off season, but thus far he has been a true bust for the Braves. With their substantial lead in the NL East, the Braves have the opportunity in September to play multiple outfielders in order to determine which of them should get the majority of the playing time come October.

By now, everyone in baseball has become aware of the season Braves center fielder B.J. Upton has had. The Braves acquired both Upton brothers this past summer, Justin via a trade with the Diamondbacks, and B.J. via the most lucrative free agent deal Atlanta has ever given a position player. Since making those acquisitions, Justin has done his part, hitting for a 133 wRC+, putting up 2.8 fWAR, and 2.09 REW (20.15 RE24).

On the other hand, B.J. has been one of the most disappointing players in all of baseball dollar for dollar, hitting a meek 55 wRC+, having a negative value of -0.6 fWAR, and -2.97 REW. The Braves have fared quite well this season as a team, allowing manager Freddie Gonzalez to continue to ink B.J. into the Braves starting lineup, hoping that at some pointhe will turn it around. Upton has been given every opportunity to improve his performance, but since August 11th, Upton and fellow outfielder Jordan Schafer have essentially been sharing or platooning in center field since August 11th. Since the 11th, Schafer and Upton have both started 8 of the Braves 16 games, during which time Upton has put up a .097/.147.097 slash line and a -5.29 RE24 while Schafer has produced a .160/.222/.220 slash line and a -2.15 RE24. Overall this season, Shafer has better numbers in far fewer games than Upton has played, albeit with a BABIP 49 percentage points higher than his career average.

The biggest holes on contending teams 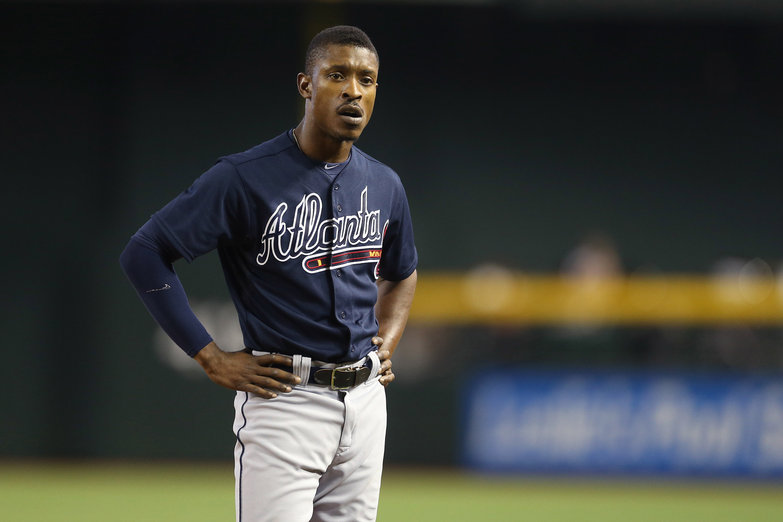 Andrew takes a look at teams with playoff aspirations that still have missing parts.

September than he has thus far in 2013. This comes down to the fact that all projection systems use past data to attempt to predict the future, and Upton's previous career numbers are far more favorable to his current 2013 stats. If the Braves took the chance and continued to start Upton, prediction machines like ZIPS, PECOTA, and STEAMER would approve of the decision.

Nonetheless, anyone who has seen Upton play this season can see that he has absolutely no confidence in himself as a baseball player, let alone a hitter. That lack of confidence, and fallible hope that he can change his fortune with one swing, will doom almost every plate appearance he gets from now until the end of September, no matter the numbers. A lack of confidence will cause Upton to tweak everything, over think all pitch selection, and overall will lead him to make every mistake in the book, seeing positive returns just as rarely as he has since April.

Still, the question in the Braves clubhouse remains, which player should get the majority of the playing time in center field? To examine this, let's take a look at the various starting outfield possibilities for the Braves moving forward.

We can dub this the "classic" outfield formula because Heyward in right field, J.Upton in left field, and B.J. in center field was the original outfield concocted by the Braves front office prior to the start of the 2013 season. This formulation puts the most talent in the outfield at once, and keeps a speedster on the bases and in the outfield in Jordan Shafer and a slugger who can play in left field in Evan Gattis on the bench as possible late game substitutes.

Heyward and Justin Upton both provide above-average offensive output with Heyward sporting a 118 wRC+ and Upton a 133 wRC+, while B.J. brings up the rear. B.J.'s 2013 splits show that while he hasn't hit will in almost every situation possible, Upton's numbers are generally better against right-handed pitchers, and especially when he hits the ball in the air as opposed to on the ground (123:30 wRC+ flies:grounders). An xfactor that should continually be considered is that Upton has been a well above-average base runner throughout his career, and even in 2013. While he hasn't reached base very often, when he reaches, he can pester the opposing pitcher, and can gain extra bases with his legs.

With the Braves more than 10 games ahead of the 2nd place Nationals, the simple option of allowing B.J. Upton to continue to play through his struggles and possible turn it around isn't the worst idea. If his struggles continue though, the question of whether to play him in October becomes very real, and maybe it's best to consider September as a final audition for Upton to play consistently in the playoffs. Whether you believe or put faith in the statistics or not, a talent like B.J. Upton has to figure it out at some point.

This option may seem fascinating, especially given Schafer's shiny looking statistics this season, but it has some flaws. I previously mentioned Schafer's BABIP, and that does carry some weight in this situation. Schafer has only 200+ plate appearances this season; so take all of his hitting metrics with a grain of sample size salt. Looking at Schafer's splits, we see that he has drastic platoon splits in 2013, hitting predominantly against right-handed pitching, and doing so to the tune of a 130 wRC+. Schafer, albeit in a small sample size, makes the case for starting him against right-handed pitching, but never letting him see a plate appearance against lefties.

Schafer's -22 career DRS and -7.0 career UZR/150 portray a sub par defender, who's above average speed obviously doesn't allow him to compensate for poor routes and a less than desirable arm. His platoon advantage against right-handed pitching combined with his other positive and negative attributes makes me think Schafer is better suited for targeted starts down the stretch, but definitely not at the level at which Freddie Gonzalez can use the ink when writing his name in on the lineup card.

This option, like the one involving Schafer, has both a good side and a bad one. Gattis, a catcher by training, but outfielder by necessity, has played left field in order to get his bat in the lineup without sacrificing Brian McCann's. This seemed smart at the time, and when utilized properly, he the team can benefit from having another home run bat in the lineup. While Gattis' early power showing led to 15 home runs and a .230 ISO, since coming back from the DL, he's been a shell of the hitter prior to the injury. Still, Gattis has proven he can hit left-handed pitching, meaning that when the Braves face lefties, especially in the playoffs, Gattis is a bat the Braves will want in the lineup. As a lefty, McCann has more trouble with southpaws, opening a door for Gattis to platoon with McCann when the situation calls for it, but the same can be said of Gattis platooning say with Schafer in the outfield. Jason Heyward has proven he can bring his stellar defense in right field over to center, allowing Justin Upton to move to right field, leaving Gattis in left field. This formation has the potential to prove useful and fruitful at times, but there may be fewer of said instances than one might believe. Gattis provides flexibility, but he is not a long-term solution.

On Friday night the Braves used Elliot Johnson as their left field. Their starting outfield didn't include Heyward or Justin Upton, but Johnson, an infielder by trade, started in the outfield nonetheless. Johnson hasn't hit well I the few appearances he has made this season, but he's fast, and has always had a good glove in the infield, making him at least an interesting option to man an outfield spot, but I can't imagine him starting there come the playoffs. Johnson allows Freddie Gonzalez to continue to rest Heyward and Justin Upton, as well as give as many plate appearances as possible to the other outfielders in the hopes one of them grabs the job going into October. This strategy might not work the way Gonzalez hopes, but it can't hurt.

The Braves, despite various injuries to the bullpen and starting rotation, actually have one of the more complete teams in the NL heading into September. They have a conformable,yet not untouchable lead in the NL East, but few outside of Washington D.C. think the Nationals can make a 2007 Phillies-like run and capture the NL East at the very end of the season.

Their outfield situation happens to be one with which they can afford to fiddle. B.J. Upton has been nothing other than disappointing if not verging on embarrassing, but that does not imply his futility at the plate will continue forever. Maybe a month of pressure free baseball might allow some semblance of his confidence on the baseball field to return. In the event said semi-miracle does not come to fruition, the Braves have some solid, but not great options. Using a platoon of Jordan Schafer and Evan Gattis might be waving the white flag in terms of B.J. Upton's season, but those two could become solid replacements if their production is combined. This situation should be watched closely heading into October, but the true key for the Braves will be to keep their bats alive and hot in a short series.