Giving some love to under the radar 2013 rookie hitters

Yasiel Puig may get the ink, but there are a lot of impressive rookie hitters this season.

Share All sharing options for: Giving some love to under the radar 2013 rookie hitters

Yasiel Puig gets the publicity. Manny Machado gets love from the uninformed. Wil Myers has The Wil To Win. Evan Gattis is El Oso Blanco, owner of the best backstory in the game today.

But beyond those three rookies and one non-rookie-mistaken-for-a-rookie, the class of 2013 rookie hitters has actually been pretty solid. Not excellent, mind you, but solid. While the volume and accumulation of Wins Above Replacement -- a quick tool we can use to gauge the impact of a group – is below any year in the past decade, the relative malaise around the rookie position player class has had some underappreciated gems.

But before we build them up, let’s knock them down. The 2013 rookie position player class, hereby referred to only as the "2013 rookie class" even though it doesn’t include pitchers, has accumulated fWAR at a slower rate than any group of rookies in the past decade.

To wit, the graph below shows the total fWAR for rookie classes from 2000 to 2013. It also includes a line graph denoting the "Rookie WAR Per 600 Plate Appearances," an attempt to show the quality of rookies regardless of playing time. 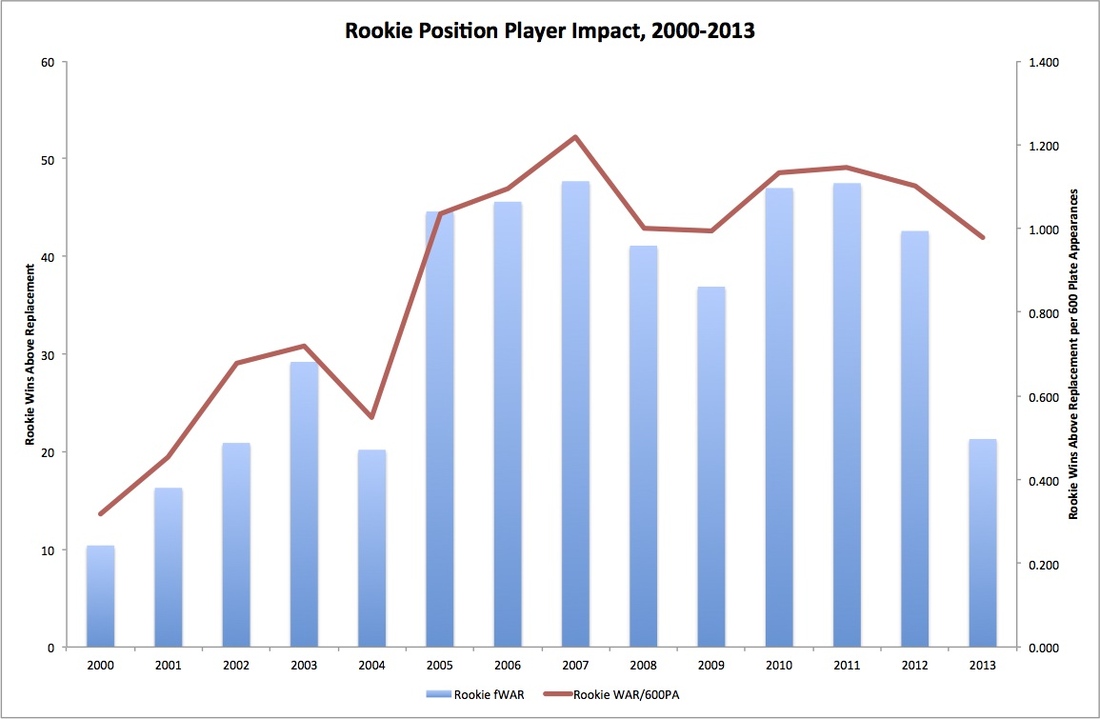 The total impact is unclear so far, and my guess would be that rookie fWAR is not distributed evenly over the course of the year, ballooning with September call-ups. However, on a per-600 plate appearance basis, 2013 marks a rookie low as far back as 2004, when apparently good rookies were outlawed from baseball.

But perhaps this is due to some really poor rookies dragging the group as a whole down. To get an idea of the top players from each class, I filtered rookie seasons to include only player seasons with more than 100 plate appearances and at least 2.0 WAR per 600 PA. Basically, that cut off gives a rough indication of the impact of rookies who were league average during their time. 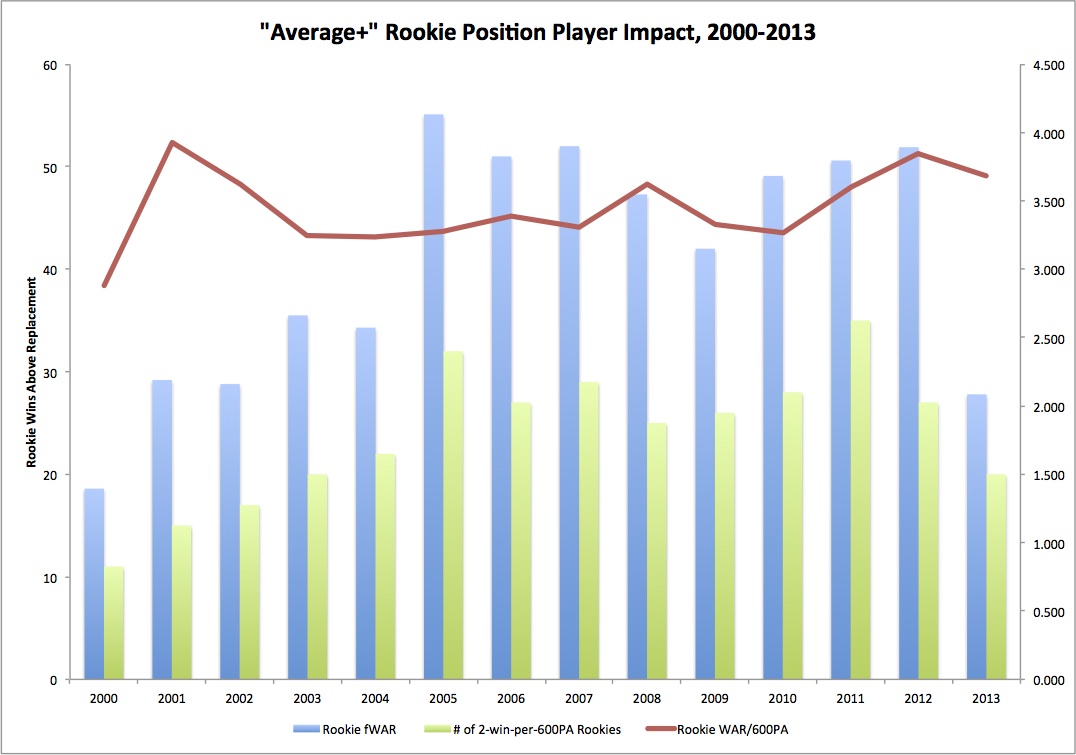 Again there’s a drop-off in full volume but this time we don’t see the same drop-off in WAR scaled to 600 plate appearances. Though the number of players here is fewer than in all years going back to 2003, the impact of this group is stronger than in any year but 2012 all the way back to 2001.

Now, this doesn’t really mean much – we’ve used some arbitrary endpoints to create a rate stat for performances that may not be sustainable over larger samples. There’s not really a way around that, so consider this a story point only. But basically, the top rookies in 2013 are performing better than those in recent history, there are just fewer top rookies.

As the graph indicated, there are 20 rookies right now who would put up two-win seasons if given 600 plate appearances at their current rate of production. Some of the names are obvious – Puig and Myers have performed at All-Star caliber levels for a month or two, while Gattis has shown an above average power tool to go with some sub-standard tools, grading him out as an average major leaguer.

But would many realize that, on a rate basis, Yan Gomes has actually been the most productive rookie this year? Gomes has 2.3 fWAR in just 168 plate appearances. He’s posted a .374 wOBA (142 wRC+, or 42 percent above league average at the dish) and also plays catcher primarily, further pumping up his value.

And has anyone realized that A.J. Pollock is actually second in rookie fWAR, using his elite fielding abilities to add 2.5 wins to the Diamondbacks bottom line? This, despite the fact that he has just a .292 OBP and has a wOBA that belongs in the Marlins lineup (.302). Sure, defensive metrics are fickle in small samples, but Baseball Reference agrees (1.9 rWAR), even if Baseball Prospectus (0.4 WARP) doesn’t.

There’s also Nolan Arenado, somewhat of a post-hype sleeper in fantasy circles due to Coors-fueled hype that never materialized. But Arenado has nine homers holding up his wOBA (.301), allowing his elite defense at the hot corner to shine (and all three sites agree he’s a plus defensively, though again B-Pro is most skeptical).

Jose Iglesias is somewhat the opposite, sporting a BABIP-fueled wOBA of .342 but getting little love from fielding metrics despite the eye test telling us he’s very good.

There are others, too. Here are the top-20 in in terms of fWAR per 600 plate appearances:

And now, the lede sufficiently buried, my two favorites of the group:

Jedd Gyorko - a pre-season favorite of mine, Gyorko struggled a bit out of the gate and found a groove in May and June until an injury sidelines him. Since returning, he’s been downright atrocious at the plate, hitting just a shade north of .100 over 58 at bats without a single walk. It’s unclear what exactly the issue is, perhaps some lingering trouble from the groin injury, but there’s still a lot of upside in Gyorko if he can rediscover his early-season magic. My ottoneu team implores him to do so down the stretch.

Matt Adams - The Other Matt in St. Louis, Adams has been a huge find for the Cards at the plate. The lefty has maintained his high-BABIP profile from the minors while taking enough walks to keep the OBP above average (.346), but it’s been the pop in the bat that’s been most valuable. Adams has eight home runs and a .200 isolated slugging percentage, pushing his wOBA to .362. That’s good for a 134 wRC+. Unfortunately, the defensive metrics aren’t kind to him. Considering he also plays first base and thus has a high replacement level at his position, his fWAR sits at just 0.7 on the year.

But the Cardinals seem just fine with the production he’s provided, especially considering he’s done something generally difficult to do -- he’s been incredibly successful as a pinch hitter. Adams has a 212 wRC+ as a pinch hitter, having gone 10-for-28 with three pinch-hit dingers.

Of course, as with a lot of elite rookie performances, Adams’ ability as a pinch hitter is probably unsustainable. But it’s been damn valuable for the Cardinals and just another indication of how the 2013 rookie class has been a bit underrated this season.

All statistics courtesy of FanGraphs unless otherwise cited.

Blake Murphy is a writer at Beyond The Box Score. You can follow him on Twitter at @Blake MurphyODC.