The Braves have won eleven in a row and it doesn't look like anyone can stop them right now as Justin Upton has reawakened. Chris Perez melted down in during a very important inter-divisional matchup last night. And one team shocked fans everywhere and shut out a league-best offense. 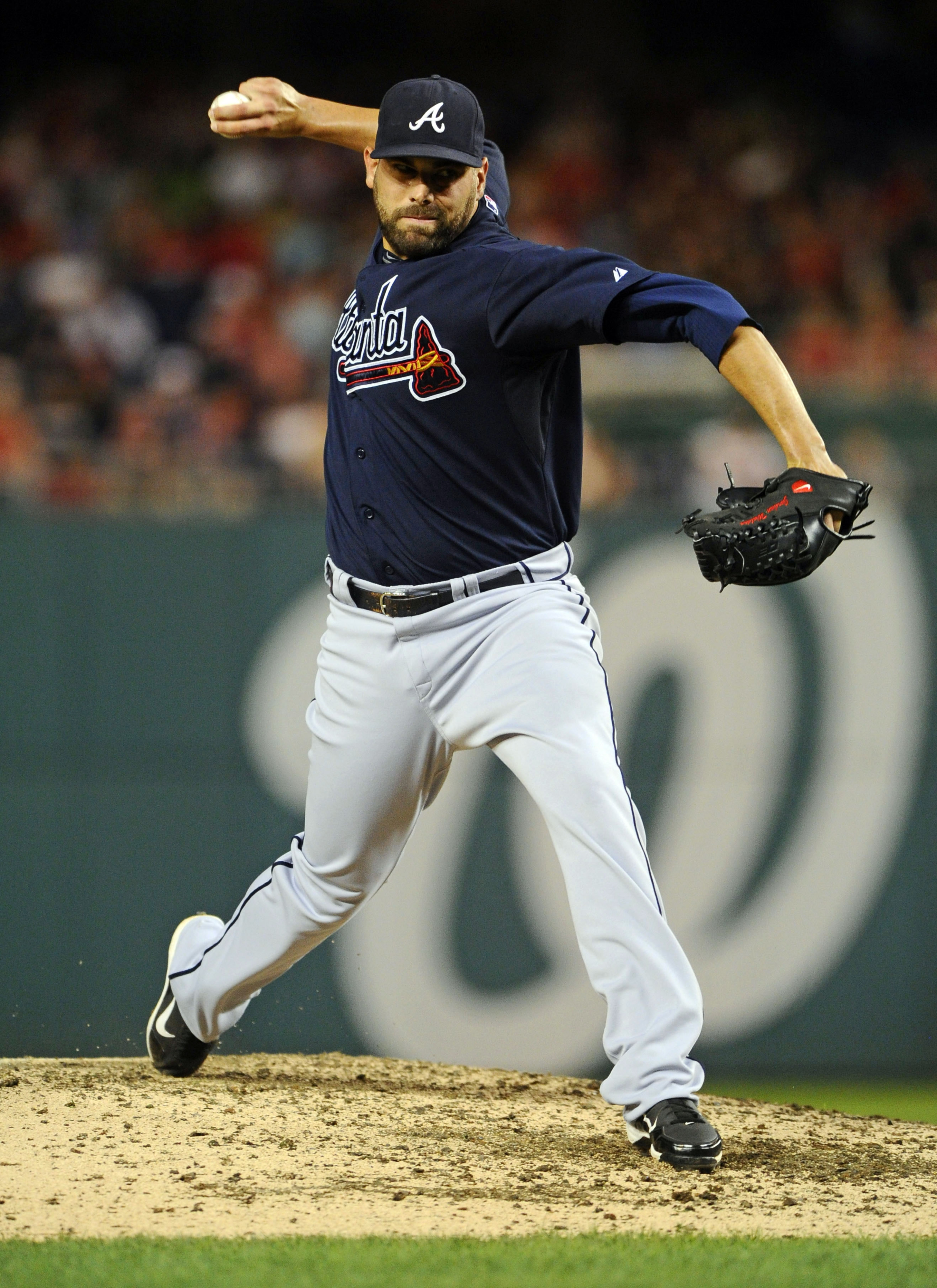 Atlanta has now won eleven in the row and seemingly all but claimed the crown of the NL East. Justin Upton has awoken and is tearing the cover off the ball over the past week. Considering that they are now 23 games over .500, it's a testament to how well the team is playing as a whole despite Jason Heyward and B.J. Upton's season long struggles.

Last night was a rubber match between Mike Minor and Stephen Strasburg. Minor exited after 11 baserunners and two runs were allowed in six innings. Meanwhile, Strasburg struck out nine over seven innings and only allowed two runs on six baserunners. Yet, he couldn't lock up a win. (#killthewin) Tyler Clippard gave up a homerun to red-hot Justin Upton and it ended up being the difference maker. David Carpenter contributed a whopping 30% to the Braves' win expectancy while recording just six outs. Jordan Walden, giving Craig Kimbrel a breather in the ninth, made things interesting and created an intense situation (5.07 pLI) but was able to record a Shutdown while handing the Nationals their 58th loss.

More on the Braves at: Talking Chop More on the Nationals at: Federal Baseball

I said it before and I'll say it again: Anibal Sanchez would have my vote (if I had one) for the AL Cy Young if his shoulder hadn't started barking last month. Hurling over seven innings with 11 strikeouts, four hits, two walks and two earned runs, Sanchez was dominant but actually in line for the loss until Chris Perez melted down in epic fashion. Coming into the ninth, the Indians were up 2-0 and had a win expectancy of 92.9%. Perez (3.56 pLI) preceded to allow a double, a single, a walk and a three run dinger without recording an out (-.858 WPA). Corey Kluber 's seven-plus shutout innings against one of the most intimidating offenses in the league was ruined (Kill the win). Alex Avila, who swatted the three run homer in the ninth, only recorded that hit and provided a .394 WPA.

More on the Tigers at: Bless You Boys More on the Indians at: Let's Go Tribe

The Dodgers simply cannot be stopped on the road right now. Adam Wainwright was credited as the losing pitcher despite recording a quality start and 2.47 FIP in seven innings that consisted of nine baserunners, five strikeouts and three earned runs. Zack Greinke singled in the eventual winning run but his pitching line wasn't much better than Waino's: six and a third with eight hits, a walk, four strikeouts and two earned runs (2.72 FIP). Paco Rodriguez gave Kenley Jansen a break and threw two shutout innings in relief, good for a 43% boost in win probability.

More on the Dodgers at: True Blue LA More on the Cardinals at: Viva El Birdos

Well, we all saw this coming. The hapless Astros shut out one of the best offenses in the majors last night. Brett Oberholtzer (.44 WPA) threw seven shutout innings despite allowing six baserunners and only striking out two. In relief, Wesley Wright made things interesting by giving up a walk and a hit while only recording two outs. Hurriedly, Bo Porter pulled the hook and threw Josh Fields into the mix; who excelled and struck out all four batters that he faced (-2.96 FIP). On the other hand, John Lackey had a .71 FIP in his six innings, striking out ten but allowing 10 baserunners yet he was saddled with the loss. (Again, #killthewin)

More on the Red Sox at: Over The Monster More on the Astros at: The Crawfish Boxes 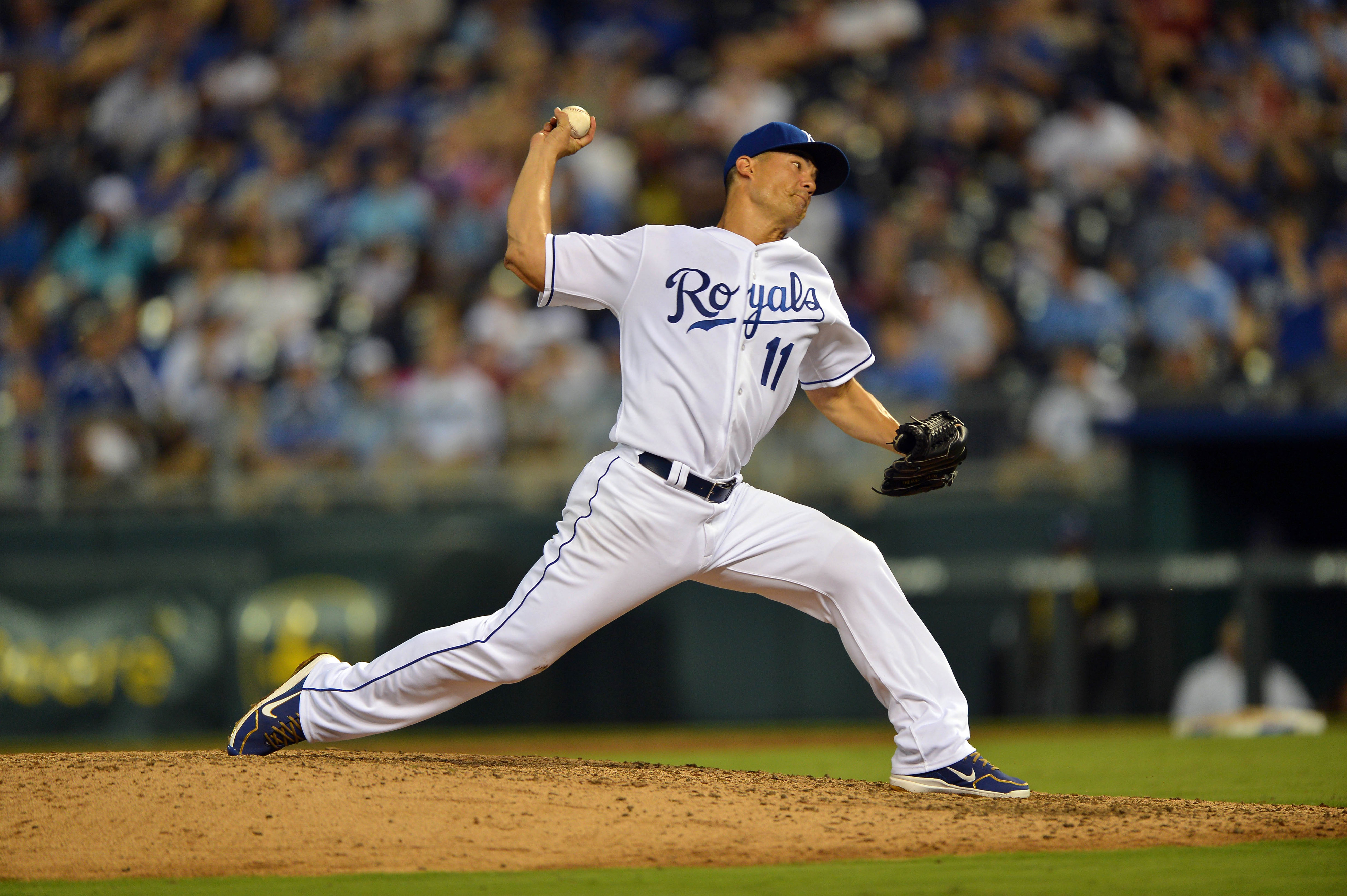 Yikes. Kevin Correia has been regressing since his extremely lucky March/April but last night's performance was something else. 10 of the 16 batters he faced in two innings got on base. Six of those 10 crossed home plate. Somehow, Correia wasn't the worst pitcher in the game! Ryan Pressly allowed eight baserunners in just one and a third. He allowed seven runs.

The Royals' Jeremy Guthrie never ran into trouble during his complete game shutout that consisted of seven strikeouts. By the third inning, the Royals win expectancy was 95.1%. But hey, Jamey Carroll, a reserve infielder, recorded the only one-two-three inning for Minnesota. There's nothing quite like seeing a position player take the mound in a blowout and see what kind of slop they can throw out there.

More on the Twins at: Twinkie Town More on the Royals at: Royals Review

Andy Pettitte was BABIP'ed to death in just under three innings as he allowed eleven hits and seven earned runs but actually registered a 1.16 FIP in a super small sample size. Jose Quintana breezed through six-plus innings of one-run ball. The White Sox didn't have their win expectancy dip under 64% after the top of the second inning. Some relatively unknown third baseman finally finished his rehab from a serious hip injury and made his season debut last night for the Yankees too.

More on the Yankees at: Pinstriped Bible More on the White Sox at: South Side Sox

Jerome Williams lost his command and his control in the middle of the fifth inning and ended up allowing five runs on nine total baserunners. Joe Blanton pitched three perfect innings in relief and has now only given up one hit in six total innings as a reliever. It's sad to see Mike Trout draw more and more walks only to rarely be brought home to score. Howie Kendrick hyperextended his knee and Anaheim's season from hell continues its downward spiral.

Martin Perez also struggled with his control but was able to miss a ton of bats and get a little lucky, recording seven strikeouts and two earned runs on four hits and four walks. After Elvis Andrus' triple (.21 WPA) in the fifth, the Rangers were able to coast to a victory.

More on the Rangers at: Lone Star Ball More on the Angels at: Halos Heaven

R.A. Dickey has had some excellent starts this season and he posted another one yesterday. The Mariners offense isn't a juggernaut but Dickey only allowed one run on ten baserunners in over seven innings while striking out five. If only he could start stringing a couple of these starts together now. Toronto practically has no shot at making the playoffs this year, despite their impressive win streak in June, but fans can definitely have a reason to expect an improvement if their ace can get back on track.

Hisashi Iwakuma was rung up with a loss even though he allowed fewer baserunners than Dickey (#killthewin). Yoervis Medina was only able to get one quick out before allowing an inherited runner advance on a single and wild pitch. Then, Oliver Perez came in and gave up a terribly inconvenient single to Mark DeRosa in the eighth (-.33 WPA) that brought home the winning run (tallied to Iwakuma) and some insurance. Perez actually struck out three of the six batters he faced and tallied a rare combination: a negative FIP (-1.46) and Meltdown. After that, Dickey, Aaron Loup and Casey Janssen were able to quickly record the final six outs and go home with a win.

More on the Blue Jays at: Bluebird Banter More on the Mariners at: Lookout Landing

Chad Gaudin struck out eight and allowed eight baserunners in six and a third but only gave up one earned run. The woeful Brewers offense just couldn't get anything going against the righty. Tyler Thornburg shut out the Giants in his six innings of work only to see his encouraging performance ruined by the underwhelming Milwaukee bullpen. John Axford's control has completely left him over the past week, notching his third Meltdown in his past five appearances. Javier Lopez was thrown into an intense situation (4.55 pLI) while facing Rickie Weeks but was able to get him to ground into double play, adding 25% to the Giants' win probability.

More on the Brewers at: Brew Crew Ball More on the Giants at: McCovey Chronicles