What Can Granderson Offer the Wounded Yankees?

Curtis Granderson has once again returned to the Yankees lineup. He brings the same skills as before, but this time for only two months. Can the healed outfielder push the Bronx Bombers towards the postseason, or should we consider that possibility a lost cause?

Share All sharing options for: What Can Granderson Offer the Wounded Yankees?

2 months remain in the MLB regular season, but unlike years past, the New York Yankees reside not squarely atop the AL East standings, but instead in 4th place, just ahead of the Toronto Blue Jays. GM Brian Cashman may have worked the phones with ferocity prior to Wednesday's trade deadline, but very little came of it. The Yankees made one deal, bringing Alfonso Soriano back to the Bronx, but his presence will not turn things around enough for the Yankees to make a serious push for a playoff spot.

It should come as no surprise to know that the Yankees hitting has been downright abysmal this season. The team currently ranks third from the bottom in wRC+ with an astounding mark of 82. Teams that have better numbers include the Astros (85), Twins (91), and Mets (92). The Yankees have remained afloat, above .500, with great pitching, and well-above average defense.

To add a bit of insult to injury (pun intended), the 2014 Yankees will probably have issues in more areas because of

Who Has the Biggest Holes in Their Swings? 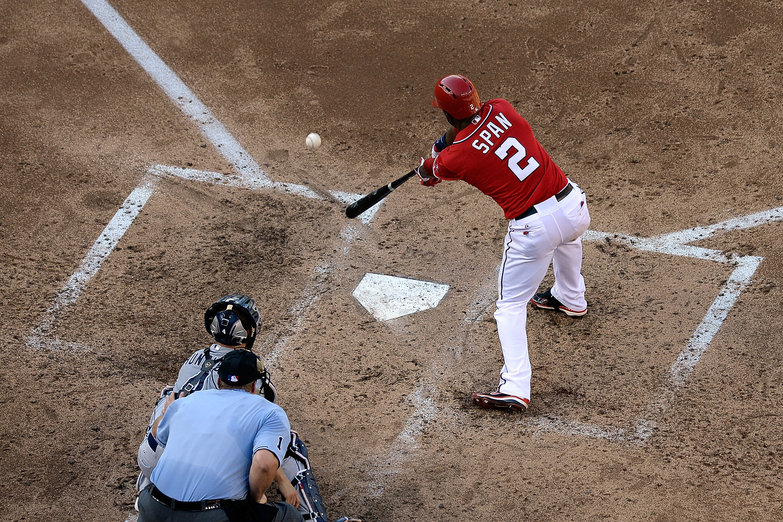 their age, the impending loss of some players, and the deterioration of others (C.C. Sabathia). Brian Cashman and his staff will have some work to do this offseason if the Yankees are to seriously compete for a playoff spot in 2014, and while it isn't impossible, the task may prove quite arduous and frustrating. The Yankees and their fans will have to sit and watch other teams play in the postseason tournament this October, and while 19 other teams and their fans will do the same, it hurts just a bit more if your associated with the team from the Bronx.

Using Baseball Prospectus' playoff odds, the Yankees currently have almost no chance of winning their division (0.4%), and slim odds to win one of the two wild card spots (6.8%). These calculations are based on simulated seasons given the team's current roster, previous play, and projections for the team going forward. One aspect these calculations cannot take into account is the addition or subtraction of players throughout the course of the rest of the season. For example, outfielder Curtis Granderson was activated before Friday's game against the San Diego Padres.

In a piece for Yanks Go Yard, writer Jason Evans makes the case that,

"The Yankees biggest problem is scoring runs and Granderson may be just the elixir they need to fix this problem."

It's safe to say that one player's return from the disabled list will not make the 2013 Yankees playoff viable, but who is to say that adding Granderson into the mix won't make some sort of difference? Granderson has thus far played in 8 games for the Yankees due to multiple injuries to his forearm and hand sustained from being hit by pitches. Granderson has played three full seasons for the Yankees since coming over in a trade form the Detroit Tigers. He's averaged a 125 wRC+, 36 home runs, and 4.2 fWAR per season since joining the Bronx Bombers, numbers that while not earth shattering, are not easy to replace.

From the way the numbers shape out, Fangraphs projects that every team that will make the playoffs in the AL this season will have at least 90 wins, with the Rangers taking the second wild card spot with a projected record of 90-72. The same can't be said for the forecasted NL playoff race, in which Fangraphs projects that the Reds will win the second wild card spot with an 87-75 record. The injury bug has ravaged the Yankees this season, and given the forecast, had players like Granderson, Jeter, and Teixeira played at their recent capacities for even 140 games, we might very well be discussing the Yankees as a serious playoff team.

Taking Derek Jeter, Curtis Granderson, and Mark Teixeira's recent three-year average of fWAR, and subtracting the number of wins the Yankees have gotten from those three positions so far this season, we can get a sense for about how much better the team could have been. A full season of Granderson would have netted the Yankees about 3.7 more wins. Derek Jeter's three-year average comes to about 2.6 fWAR, which far exceeds the -1.4 fWAR Yankees' shortstops have produced in 2013, and the team would have netted about 3.2 more wins from a full season of a healthy Mark Teixeira. Even if we made these somewhat crude calculations a bit more conservative, it wouldn't be wrong to estimate that the Yankees would have been a 90+ win team with these three players healthy and playing everyday.

Getting Granderson back for the last two months of the season is the textbook definition of too little too late. Given the number of above-average teams in the AL East, the Yankees may still not have made the playoffs with a healthy team this season, but the odds would have been far more in their favor to do so. Many teams entered the 2013 season with expectations of the playoffs, but I would say that Yankees fans, not Royals, Phillies, Nationals, or Angels fans should feel frustrated with the 2013 season. Injuries are fairly unpredictable, and while the other teams mentioned have been hampers somewhat by injuries, most of their misfortune can be tied directly to bad on field performance, not physical misfortune.