The biggest holes on contending teams

Tuesday afternoon the Pirates fixed one of their biggest deficiencies with their trade for Marlon Byrd. What are the problem spots on the other contenders?

Share All sharing options for: The biggest holes on contending teams

Yesterday the Pittsburgh Pirates acquired Marlon Byrd from the New York Mets, improving their rightfield situation for the stretch run and the playoffs. While I am fully aware that everything in the preceding sentence sounds like a bit of fiction, it is indeed quite true. After piling up consecutive losing seasons for two decades, the Pirates are bonafide contenders in the National League, as weird as that sounds. That success has come despite the lackluster contribution from the team's right fielders. To date, the group of Jose Tabata, Alex Presley, Josh Harrison, Felix Pie, Andrew Lambo, and Travis Snider combined to hit .245/.307/.368, and let's just say their collective defense has not been enough to put up with such poor numbers at the plate. Enter Byrd, an afterthought entering the season who is in the midst of his finest big league campaign posting a 135 wRC+ and racking up 3.5 fWAR to this point. Amazing, but Marlon Byrd should actually be worth up to a full win the rest of the way for the Pirates, and he simultaneously improves the Bucs chances of winning a title.

Moving away from the Pirates, however, the trade got me thinking -what constitute the biggest holes for the remaining contending teams and how might they overcome said deficiencies?

Byrd to the Pirates 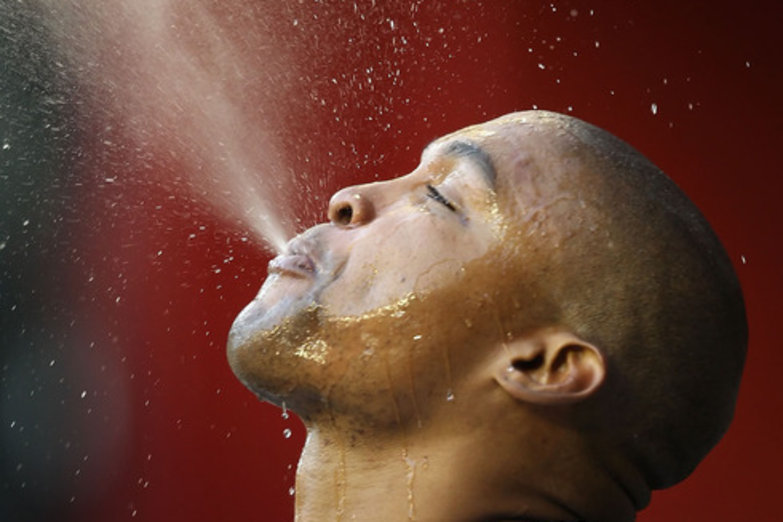 Want to read more about the Marlon Byrd trade? Ken Woolums has you covered here.

While there may be some concerns about Boston's rotation, a trade for Jake Peavy and the imminent return of Clay Buchholz should actually make that a strength heading into September. No, the real hole for this team is at the hot corner. So far, Boston's third baseman have been alright, but that is largely due to the play of Jose Iglesias, who now plays for the Tigers. Take out Iglesias' performance (.348 wOBA, 115 wRC+, 0.9 fWAR) and you're left with -1.3 fWAR between Jonathan Diaz, Brandon Snyder, Brock Holt, Pedro Ciriaco, Xander Bogaerts, and Will Middlebrooks. Middlebrooks has been the most disappointing, regressing in nearly every way after a strong rookie campaign:

So what's the plan going forward and into the playoffs? Boston continues to run Middlebrooks out there, but I'd much rather hand the reigns to the 20-year old rookie Bogaerts and see what he can do the rest of the way. Before his promotion Bogaerts put together a .297/.388/.477 line between Double-A Portlant and Triple-A Pawtucket and the reports are actually better than the stat line. With the second best offense in the big leagues, Boston doesn't need much from its third baseman, but they need more than they're getting right now.

Detroit may very well be the best team in the big leagues, reflected in their 9/2 World Series odds at Bovada. Miguel Cabrera leads the best offense in the big leagues, and their starting pitchers have been worth nearly six more wins than any other rotation, but once again the bullpen ranks middle of the pack in both WAR and FIP. After letting the Tigers down last season, it was almost universally assumed that the team would look to upgrade the bullpen this offseason or at the very least at this year's trade deadline. Other than the pickup of Astros' closer Jose Veras, however, the pen looks very similar to the 2012 unit. Lately, there has been talk that the relievers have pitched better for the Tigers, sporting a shiny 2.67 ERA in the second half compared to a 4.15 ERA prior to the All-Star Game. Truthfully, though, they have been about the same, if not worse than in the season's first half.

Of all the contenders, Detroit's weakness may be the least glaring, but then again bullpens tend to really impact the playoffs. Luckily, the solution for the Tigers may simply be shifting one of the starters, probably Rick Porcello, to the bullpen in the playoffs and increasing the workload for the rotation. But if the pen does let them down once again, I bet we see the team spend on a "proven" closer this offseason.

Maybe the most glaring hole for any contender is the shortstop position for the Red Birds. Pete Kozma has gotten the majority of the playing time at this position, racking up 400 plate appearnaces and hitting an abysmal .218/.275/.275 with a .242 wOBA and a 50 wRC+. For comparison's sake pitcher Jake Westbrook has a .239 wOBA and a 49 wRC+ this year. Night in and night out, the Cards are leaving runs on the table because they are getting nearly nothing from two of the nine spots in the order, and although Kozma's defense has been above average, it doesn't justify him earning regular at bats. The other big league option is Daniel Descalso, a slightly better hitter with a much worse glove.

On the farm, the team does have Ryan Jackson in Triple-A, but even he is a glove first option with very little punch. In 2013, Jackson has a .309 wOBA in the hitter-friendly PCL, but the reports on his offense are somewhat more optimistic than Kozma's. The best option to fill the spot would assuredly come from outside of the organization, yet as we approach the first of September that seems increasingly less likely. It looks like St. Louis will have to deal with the nightly pick of poison between Kozma, Descalso, and Jackson, and attempt to win games in spite of that spot.

When a team signs a player to a $75 million, five-year contract, usually it's to address a need, not to create one. Unfortunately, that's exactly what the signing of B.J. Upton has done for the Braves this season. Combining his 375 trips to the plate with fill-ins Jordan Schaefer and Reed Johnson has given the Braves a .283 wOBA and only about half a win over a replacement player. Upton himself had been worth more than three wins each of the last three years, so this has been quite a reversal of past performance. Without a true replacement in the upper minors, it looks like Atlanta will have to count on the Bossman, a scary proposition for a contender.

On the positive side, he can't be as bad as he has been to this point. Upton sports a career 103 wRC+, and I'd bet on the track record of his first eight seasons over his past 102 games. Already he seems to be turning it around a little bit -- his second half batting average is more than 30 points higher than it was in the first half, and he seems to be swinging better against left-handed pitchers, a problem that has not plagued him until this season. Much like the Cardinals, Atlanta seems stuck with few options, but that should be alright in this case.

Certainly the other contending teams are not without their flaws, but these seemed to be the most glaring and interesting situations to me right now. No team is perfect, and winning a championship will mean overcoming weaknesses for any team. Yesterday, the Pirates took a step to do just that, and I'll be watching down the stretch to see if any of the other teams do the same.