Taking a graphical look at how WAR at the team level and Pythagorean wins compare to actual team wins in 2013.

This isn't going to be prescriptive. I don't know why Jim Leyland's Detroit Tigers have far fewer wins than their run differential and team WAR would suggest. I don't know how Bob Melvin's Oakland Athletics have done the opposite. But I know that those gaps exist.

This morning, I pulled the current MLB standings and threw them in a table. I added the "replacement level" for each team, which is simply the Fangraphs and B-Ref agreed upon win rate of .294 (that is, a team full of replacement level players would be expected to win 29.4 percent of their games) multiplied by the team's number of games. I added in Batter fWAR and Pitcher fWAR, and then also threw in B-Ref's Pythagorean Wins, which are based on a team's run differential (you can read more on the theory behind Pythagorean Wins at B-Ref).

If you'd like to see the whole table, I put it in a Google Doc right here.

Anyway, we now have three measures of team "success" so to speak. We have a team's actual win total (the one that matters), the team's expected win total based on their run scoring and run prevention, and a team's cumulative Wins Above Replacement from it's individual contributors. How these three measures relate is of some interest. 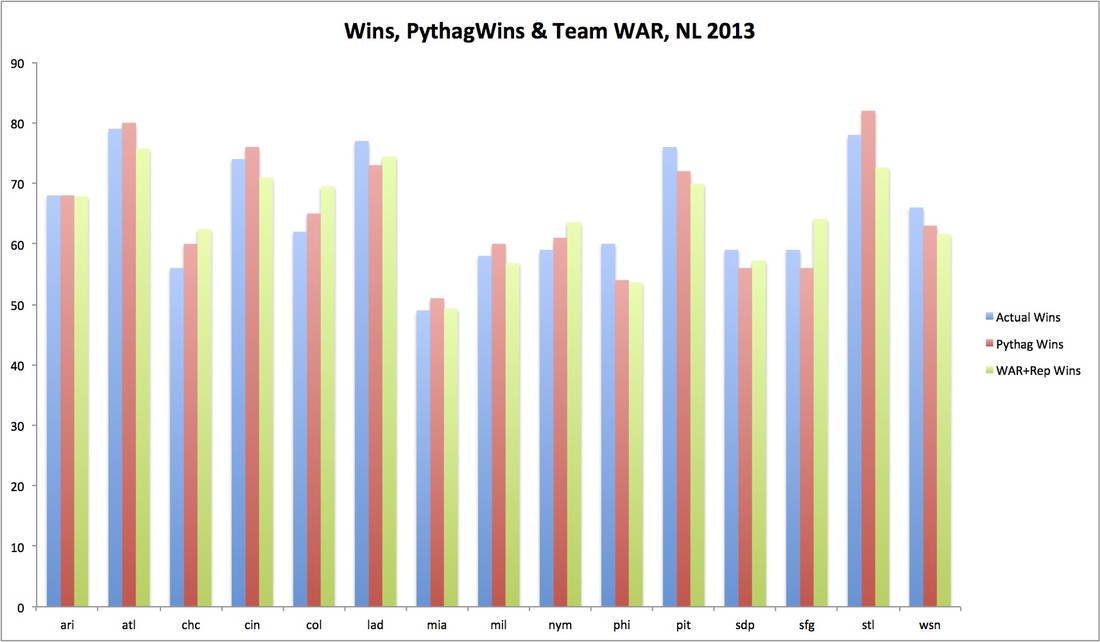 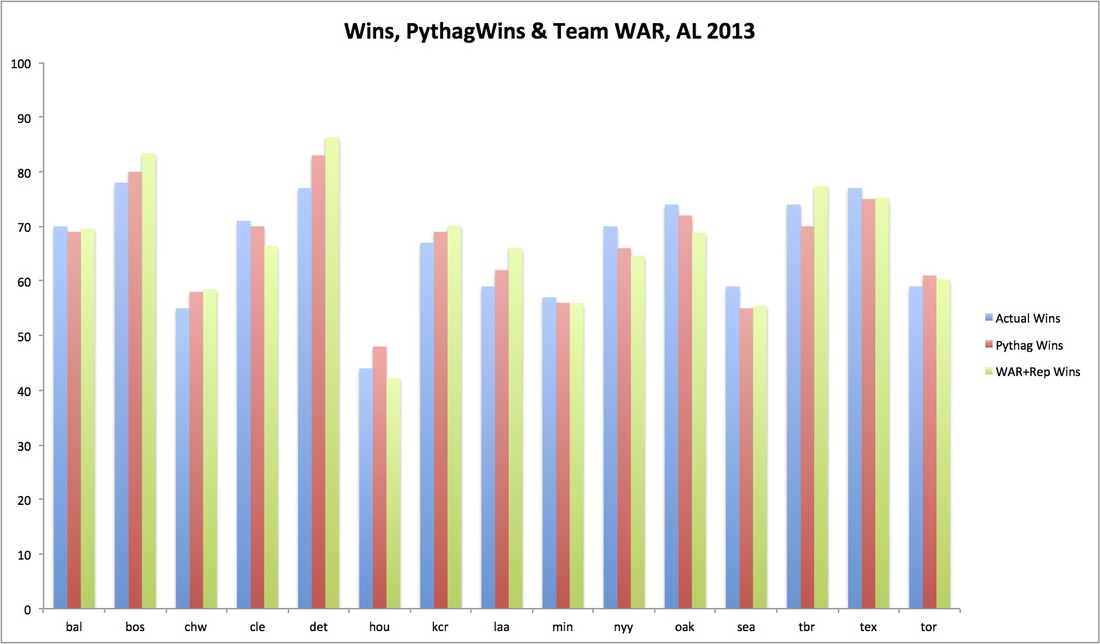 Of course, those graphs don't really tell us much unless you want to look up an individual team. The gaps between the measures are what is interesting, not the totals themselves. 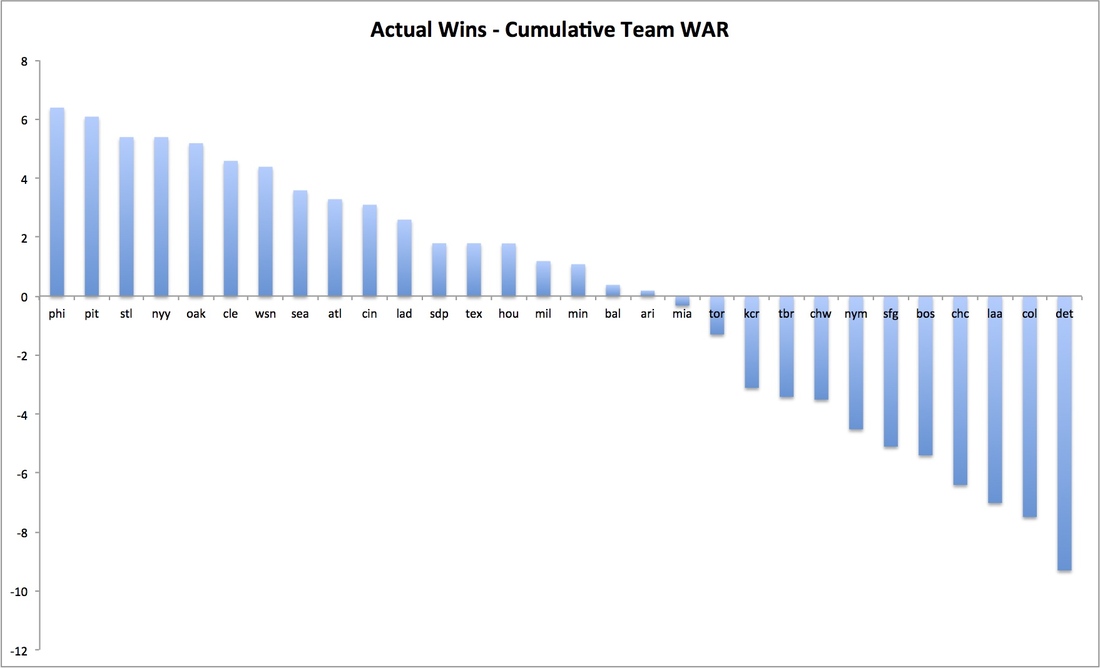 Here we see that the Philadelphia Phillies have been the best at winning more than their cumulative WAR would suggest, while the Tigers are the worst at getting real wins from their player WAR. There are a number of reasons that could be the case, such as variance in the timing of player output (pitching to the score! he's not clutch!). 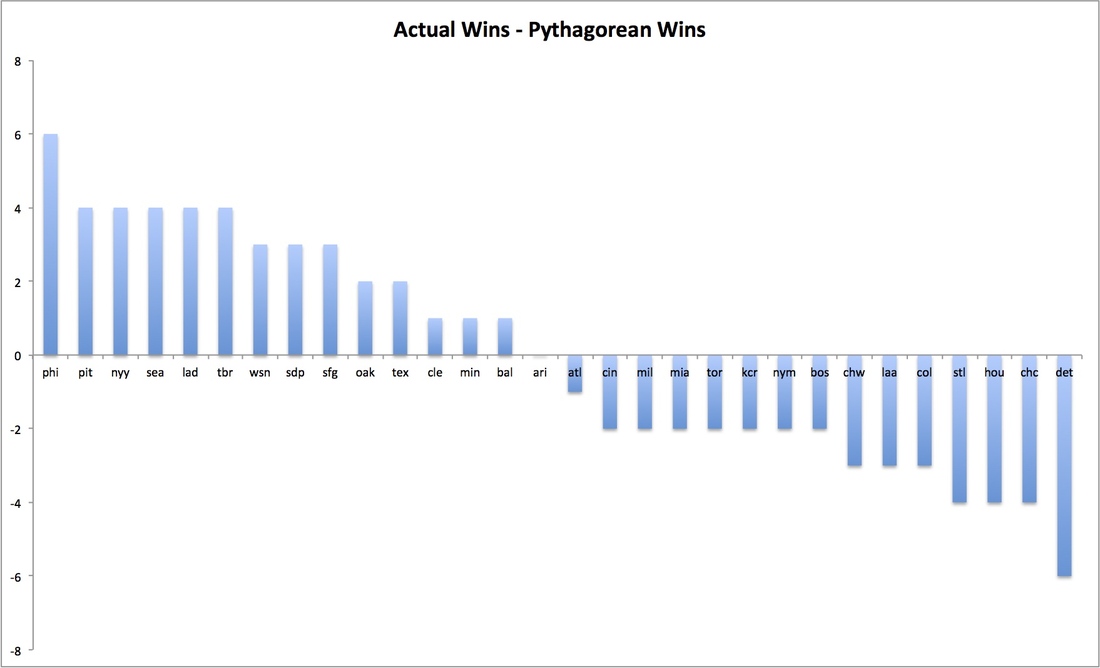 Again we see the Phillies making the "best use" of their component parts while the Tigers struggle to maximize their individual contributions. Perhaps Charlie Manuel didn't deserve to be fired, considering he was essentially making chicken salad out of chicken s*** (really bad chicken salad, but still).

What I find most interesting so far is that the St. Louis Cardinals vary widely by metric - they have 73 wins by cumulative WAR, 78 real wins and an expected win total of 82 based on run differential. The Giants and Rays have similar gaps in the opposite direction, with their cumulative WAR outstripping their actual wins, which are greater than their run differential would predict.

There is definitely the potential for further study into what may cause these gaps within a season for a team.

For curiosity sake, I also graphed the cumulative WAR components of teams in a stacked bar graph, with actual teamwins shadowing the bars. This shows the amount of batter and pitcher contribution each team has received, while also displaying the WAR-Wins gap we displayed earlier. 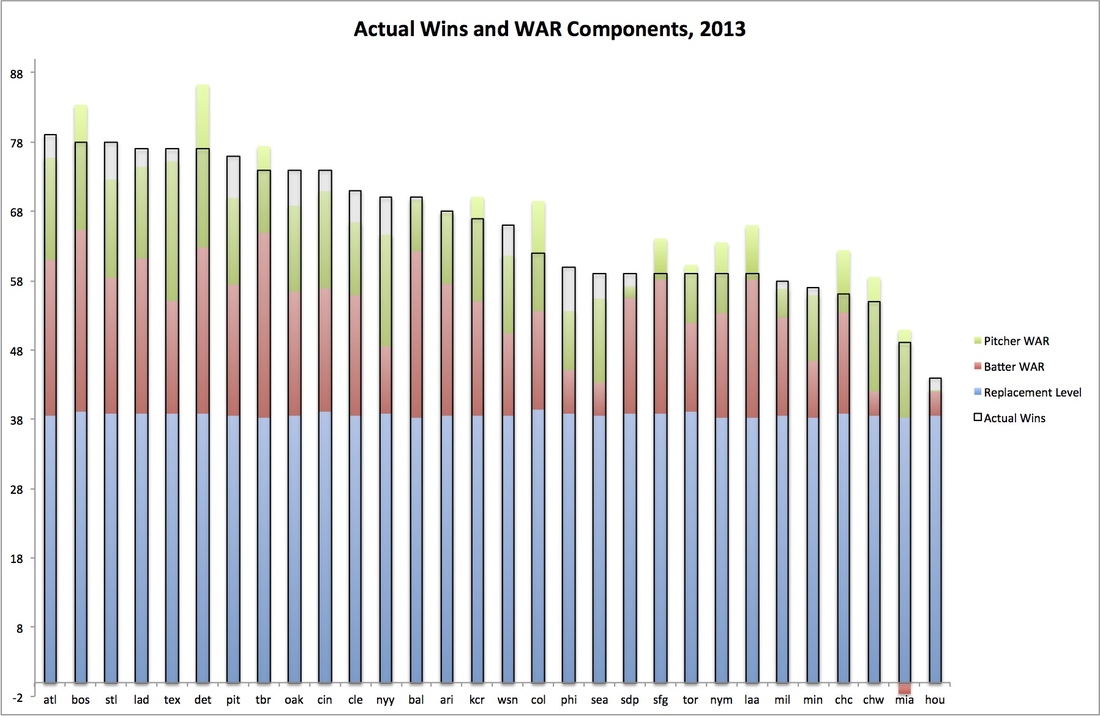 All of these graphs are just a way to visualize how team's have performed so far this year. As mentioned at the start, they are meant to be descriptive, not prescriptive. You could certainly make a case for the Tigers improving from here on out because they've underperformed relative to their outputs, or for the Pirates to fall back in the NL Central race because they've outperformed their run differential.

However, there's only a month left, and that's not a lot of time for those kind of gaps to self-correct. If this were still the All Star break, you would expect them to correct to some degree in the second half. That's because cumulative WAR correlates at about 85 percent with actual wins, while Pythagorean wins correlate at about 90 percent with actual wins. Even just this year, strong correlations are apparent. 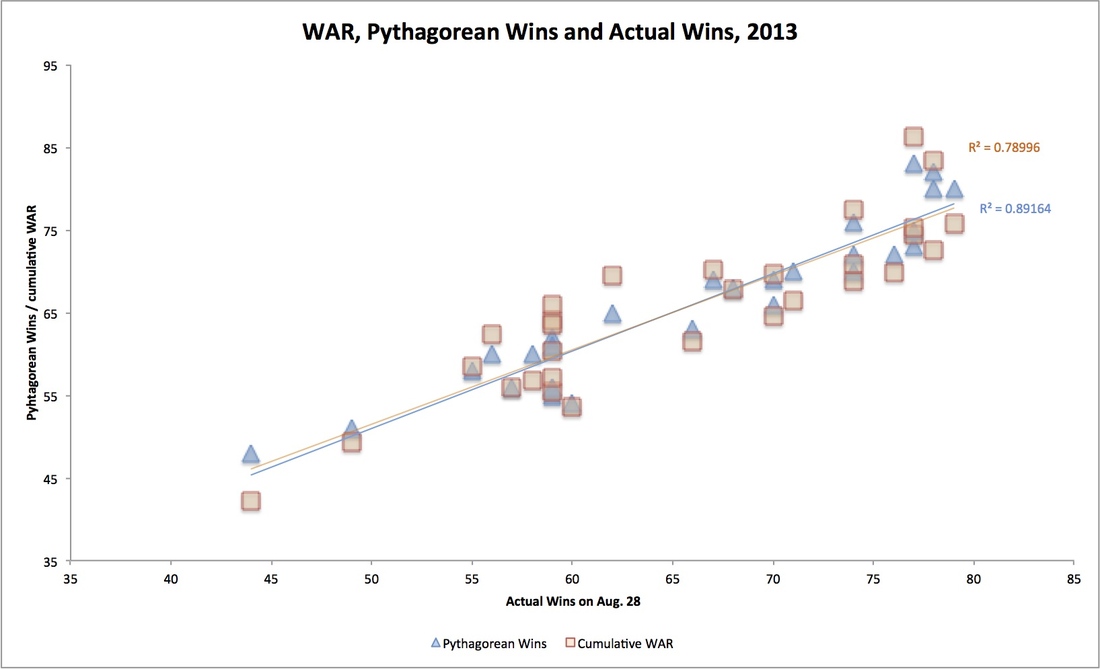 But again, 30 games isn't exactly a lot of time for these gaps to self-correct, plus there may be factors at play that can explain some of the gaps.

All statistics courtesy of FanGraphs except Pythagorean Wins, which come courtesy Baseball Reference.