The Pirates and Mets make a good August deal

The Pittsburgh Pirates made a move today to acquire OF Marlon Byrd and C John Buck from the New York Mets. In a rare late August waiver deal, the scope of a pennant race could be changed--and the Mets also get some much-needed good news.

Share All sharing options for: The Pirates and Mets make a good August deal

If the phrase "patience is a virtue" holds true, then Sandy Alderson and his front office certainly are some virtuous individuals. On Tuesday, the Mets traded OF Marlon Byrd and C John Buck for MiLB 2B Dilson Herrera and a player to be named later (PTBNL). The move is a reflection of how much the Pittsburgh Pirates want to win now and is also a reflection on how the Mets are becoming one of the best-run organizations in the league.

Much was made at the non-waiver deadline about the Mets not trading Marlon Byrd. This really did not make sense for two reasons. Firstly, we can't be aware of what offers the Mets were getting--it is entirely possible that the Mets felt Byrd's presence in the clubhouse was worth more than giving him away. Secondly--as can be seen in the trade pulled off today--there was still a month of waiver-period time for a deal to get done. By waiting until August 27th, the Mets were able to pull off quite a deal.

This deal--like most deals--breaks down to a story of two sides. For simplicity's sake, that's how this post is being broken down.

The theme for the Mets leading into this season was something close to, "Wow, look at how horrendous that outfield is! There's no way they can compete with that!" At times, the unit was even being considered as possibly the worst outfield put on a field in recent years.

Sorry to burst the bubbles of the haters, but the Mets' outfield has actually been pretty good relative to those terrible expectations. The unit ranks 19th in fWAR, 18th in wRC+, 12th in fielding--thank you, Juan Lagares--and 14th in BsR. How did this happen, you ask? Enter stud free agent Marlon Byrd.

Heading into the 2012 off season, most of the discussion surrounding the Mets dealt with what the team was going to do to build for the future. After R.A. Dickey was traded and David Wright was extended, many just stopped caring about the Mets. Now, the Marlon Byrd signing doesn't compare to the magnitude of the aforementioned moves, but it certainly will have a positive impact on the Mets' future.

For the price of $700,000, the Mets brought on Marlon Byrd at a time where seemingly nobody wanted him. As a result, they are reaping the benefits. At the same time, they are showing why rebuilding teams should still spend on the free agent market. The 2013 version of Marlon Byrd is essentially repeating the BIP rates of 2009 Marlon Byrd--he's getting the ball in the air and his power numbers are mirroring what he put up in 2009. He's put up 3.5 fWAR and is playing much like he did prior to fracturing the orbital bone in his left eye in 2011.

The Mets then held out as long as possible with Byrd--made possible by him being on a contract so small--and acquired 2B Dilson Herrera as well as a PTBNL. 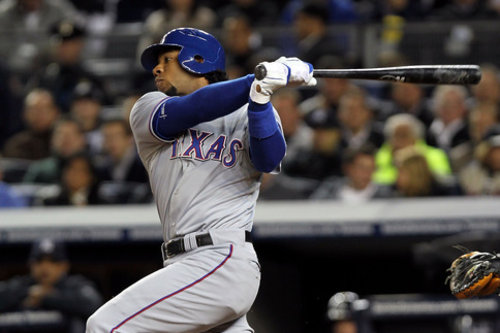 Neal Huntington and company built a contender using a similar philosophy to the "patchwork" framing the Mets used coming into 2013. Russell Martin, Jason Grilli, and Francisco Liriano were signed for a combined $9 million in 2013 salary. The trio has produced 8.9 fWAR this season,  which is a ridiculous return on investment.

As a result of their intelligent spending, the Pirates are just six games away from their first winning season since 1992. However, they have bigger goals, which is why they made a late-August play for Marlon Byrd. After losing out on guys like Nate Schierholtz, Alex Rios, and other outfielders at the non-waiver deadline, the Pirates acquired a player on pace for nearly four wins who will cost them a grand total of what is assumed to be nothing--cash is involved in the deal, so it wouldn't be surprising if the $138,271.60 owed to Byrd is covered by the Mets.

However, the Pirates did not exactly make out like bandits in this deal. Dilson Herrera is a legitimate prospect who has performed well in the minor leagues. After mashing the Venezuelan league, he eventually made his way to A ball this year, where he has a .757 OPS and has shown solid potential with his glove. Herrera has above-average speed and an above-average arm in the field. Herrera is a legitimate middle-infield prospect who is expected to see time at both second base and shortstop.

Byrd is an improvement in right field for Pittsburgh--assuming he can maintain his performance for another 32 games. If he can provide 0.75 wins in value, the Pirates could improve a game in the standings--since he is replacing Jose Tabata, who has produced all of a tenth of a win in half a season. An improvement of a game in the standings is a big deal for at team that currently rests just a half a game behind St. Louis and three games ahead of Cincinnati.

This deal is a winner for both sides. The Mets acquire a legitimate prospect for under $150,000 and the Pirates acquire two veterans that could add an additional win in value to their season. As we have come to learn from the 2012/2013 Washington Nationals, it may not be the smartest idea to risk the present for the sake of your future. It is clear after this deal that the Pirates are serious about being major players in October.