While it appears that most traditionalists and sabermetricians have called the National League Cy Young award for Clayton Kershaw, at least one other candidate is putting up a pretty good fight. Matt Harvey isn't going quietly.

Over the last few weeks, Clayton Kershaw has been great. That's not surprising because Kershaw is great. If you asked me who I thought the best pitcher in baseball was, I'm not sure I'd have to take more than two or three minutes to be certain that my answer would be Kershaw. But we don't hand out awards based on track record and we don't hand them out based on projection. Awards, in this case the National League Cy Young, are given based on the best single season performances. While most in the baseball community are sealing up their envelopes for the unanimous Kershaw decision, I'm not convinced. Kershaw is great, and so is Wainwright for that matter, but Matt Harvey has been the best pitcher in the National League to date and deserves the Cy Young.

Let's lay out the case for Harvey. First, the basics. Starts, innings, and innings per start:

Obviously, Harvey has thrown fewer innings, but we should not penalize him for having made fewer starts based on the way the Mets have decided to deploy him. If it was a five or six start difference, it might be worth knocking Harvey down, but he's one start behind and he doesn't get to write his own name in the lineup card. The only start he missed was to allow him to start the All-Star Game. On average, he's getting between 20 and 21 outs a game. Kershaw and Wainwright are getting right around 22 outs. That's not nothing, but it's not much especially considering that the Mets aren't in a playoff race so they have less incentive to push Harvey. All else equal, we should favor a pitcher who throws more innings, but as I'm about to show, all else is not equal.

So let's consider what those numbers tell us. Harvey leads Kershaw in strikeouts, walks, and homeruns per 9. He leads in FIP, xFIP, FIP-, xFIP-, SIERA, and fWAR and only trails Wainwright in walks. Harvey trails Kershaw in batting average against, .182 to .209, pretty clearly through a lower BABIP. In a moment we'll consider how much control each pitcher has, but for now let's make clear that Kershaw's only advantage comes from allowing hits at a lower rate and through that, fewer runs. He leads in ERA as seen above and also in RA/9, 1.95 to 2.32. The difference, if you're interested is 7 total runs extra for Harvey.

So there are two key issues to address, but let's start here. Setting aside hits and runs, Matt Harvey is the best of the group and Kershaw is his toughest competition considering the national sentiment. Let's start with runs allowed. Harvey pitches in a slightly tougher park, but much more importantly, Harvey plays in front of a worse defense than Kershaw:

By both measures, the Mets are worse than the Dodgers and it's by somewhere between 14 and 59 runs as of the last update. Harvey has thrown about 15% of the Mets' innings this year meaning that we can allocate somewhere between 2.2 and 8.9 runs on the defensive side to Harvey's lesser defense. Obviously these numbers aren't perfect, but they could just as easily lean toward Harvey as they could toward Kershaw. On defense alone, we could erase much of Kershaw's runs allowed advantage and that's really the only place Kershaw beats him.

Let's go a step further, though. Considering we can all agree on the need to park adjust and scale by innings pitched, it makes sense that the truth is somewhere between RA9-WAR and fWAR. One places the blame of every hit on the pitcher and one places no blame for any. Personally, I lean much more to fWAR than RA9-WAR, but I think this graphic might help us see the distinction more clearly: 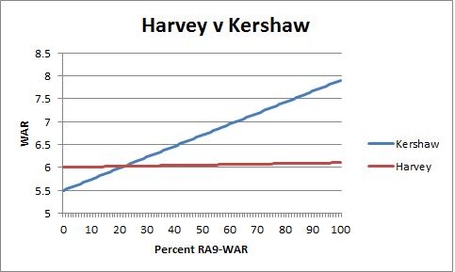 Kershaw passes Harvey at a 78/22 split between fWAR and RA9-WAR. And that's before you consider that Harvey is a start behind and we shouldn't really penalize him for that. If you'll allow me to show you the same graph per 200 innings, it looks a bit different: 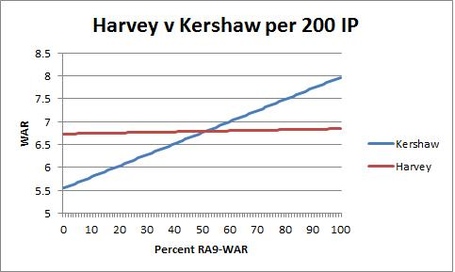 By their actual WAR per innings numbers, Harvey performs much better with Kershaw crossing at a 48/52 split between fWAR and RA9-WAR. This takes us to a couple of fundamental questions regarding how we want to award the Cy Young.

First, how much credit should a player get for their BABIP? Harvey's BABIP is .280 right now with his 2012 number coming in at .262. It's unclear which is his true value, but those are pretty close. If we look at Kershaw's numbers, you see something quite different:

It's certainly possible that Kershaw has found a way to dramatically improve his BABIP this season, but the numbers have been very consistent since 2009 ahead of this year's big jump. Is that really Kershaw's doing? As of last Monday, Kershaw and Harvey had allowed an identical well-hit average (1st and 2nd in MLB). This increase in BABIP has also come during a season in which Kershaw has allowed more line drives than ever:

It also doesn't seem like it's a coincidence that Kershaw is having this BABIP improvement during the Dodgers best defensive season of since 2009 by far:

Let's review. Harvey outperforms Kershaw in every category except stats based on hits and runs allowed. Kershaw's BABIP is much lower than his career norm during a much better defensive season from the Dodgers than anything he's ever seen. Additionally, the Dodgers are a better defensive team than the Mets. If you accept that the truth is somewhere between fWAR and RA9-WAR, then it becomes a question of where that line is drawn. FanGraphs' Dave Cameron estimated a 70/30 split in favor of fWAR earlier this week (see 12:02 and 12:03). With no controls for innings pitched, Harvey falls just short of winning under that framework this year. If we control for innings pitched, he passes Kershaw easily.

So when he's been on the mound, Harvey has been better. You have to acknowledge the defensive difference. After that it becomes about innings. You can't fault Harvey for making one fewer start, especially in the middle of August when the Dodgers have played two more games and Harvey was skipped for the ASG. Kershaw usually gets an extra one to two outs per start, but it's not Harvey's fault his team is out of the race and doesn't see the point in overworking him.

Harvey has more strikeouts and fewer walks in fewer innings. He plays in front of a worse defense and leads Kershaw is just about every possible category that doesn't include hits or runs. Kershaw is having an amazing season, but he's not having a better one than Harvey. In order to believe that you have to make the case than his BABIP drop is largely his own doing, and given his batted ball profile this year and the Dodgers defensive numbers, I don't think we can make that claim.

If the Mets shut Harvey down and he finishes with 195 innings to Kershaw's 240, I will feel differently. But for now, Harvey is out-pitching Kershaw and the only reasons he trails in ERA, RA9, AVG, and RA9-WAR are reasons outside of his control. If we're going to judge a pitcher based on what they can control, Matt Harvey has been the best the NL has to offer in 2013.