Early this morning, Casper Wells took the mound for his second relief appearance of the year. Casper Wells is not a pitcher. Throughout Arizona and Philadelphia's 18 inning affair, there was plenty of weird baseball to go around.

Everybody's a sucker for position players taking the mound and trying to hurl a perfect inning in relief and yesterday we were treated to Casper Wells' second such appearance of the year. Sadly, he melted down and prevented us from seeing how long he could throw his fastball in the low-90's. Otherwise, Jose Fernandez all but locked down the NL Rookie of the Year award with seven more shutout innings and Max Scherzer continues to make his case for the AL Cy Young. 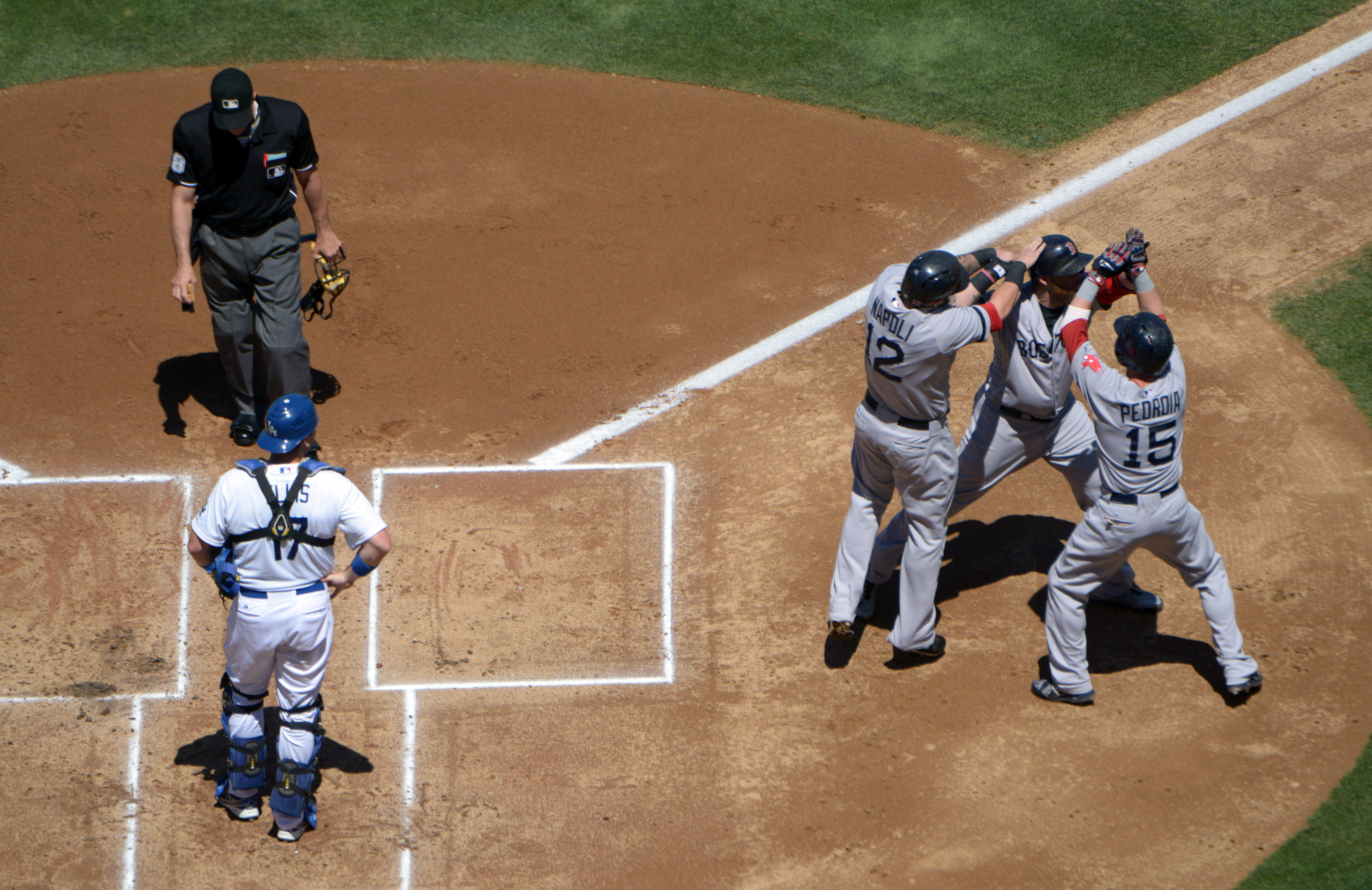 Hyun-Jin Ryu (-29% WPA) struggled out of the gate yesterday, allowing four earned runs in the first inning but settled down thereafter and completed five innings with five hits and seven strikeouts. Three of the hits came in the top of that first inning and three of the four runs came from a Jonny Gomes homer. But it didn't really matter much as Jon Lester (20% WPA) stifled the Dodgers for seven and a third. Occasionally hitting 95 MPH on the gun, Lester only allowed one run on three hits but struggled a bit with his command as he walked four. After Gomes' homer in the first, the Dodgers couldn't even scratch a 20% win expectancy.

More on the Red Sox at: Over The Monster More on the Dodgers at: True Blue LA

Saturday's matchup between Max Scherzer and Matt Harvey featured not only a battle of the AL and NL Cy Young's but the first regular season game where both starting pitchers for the All Star Game faced one another. Harvey (-1% WPA) was a little too hittable, allowing 13 hits in six and two thirds but was able to minimize the damage as only two runs were charged to him. Scherzer (33% WPA), on the other hand, was dominant, striking out eleven and allowing seven baserunners to reach over six innings. The Tigers were practically in control of this entire game as the Mets offense couldn't get anything going against Scherzer and the Detroit bullpen.

More on the Tigers at: Bless You Boys More on the Mets at: Amazin' Avenue

Coco Clutch! Chris Tillman and Jarrod Parker were equally amazing last night as they both provided a 41% chance of winning the game for their respective teams. Both went eight innings and gave up one earned run but Tillman struck out nine and only five Athletics reached base whereas eight Orioles reached and five were sat down by the strikeout. In the close game between two playoff contenders, Darren O'Day (-29% WPA) picked a horrible time to meltdown and give up the eventual game winning homer (33.2% WPA) to Coco Crisp.

Seven hours and six minutes. That's how long last night and this morning's matchup between the Diamondbacks and the Phillies was. Arizona was in complete control for much of the first eight innings until the Heath Bell Experience showed up in full force, giving up a game tying, two-run dinger to Darin Ruf. Jonathan Papelbon pitched a clean ninth and set up the possiblity of a fourth straight walk-off win for the Phillies but Josh Collmenter danced around a couple walks and sent the game into extras. Both teams bounced around with opportunities through the next eight innings with Tyler Cloyd, originally Sunday's afternoon starter, throwing five innings of relief with five walks but still registering a 65% WPA. Eventually, the Phillies ran out of pitchers as their starter, Ethan Martin (-29% WPA), couldn't survive the first inning. Casper Wells (-49% WPA), making his second relief appearance of the year, flashed some intriguing velocity (91 MPH) but lost control and gave up five runs on three hits and three walks that conceivably put the game out of reach in the 18th. Tony Campana, Paul Goldschmidt and Cliff Pennington combined for 14 of the game's 28 walks. Adam Eaton (39% WPA) had four hits in a whopping 10 plate appearances with a triple and game winning double included.

More on the Diamondbacks at: AZ Snake Pit More on the Phillies at: The Good Phight 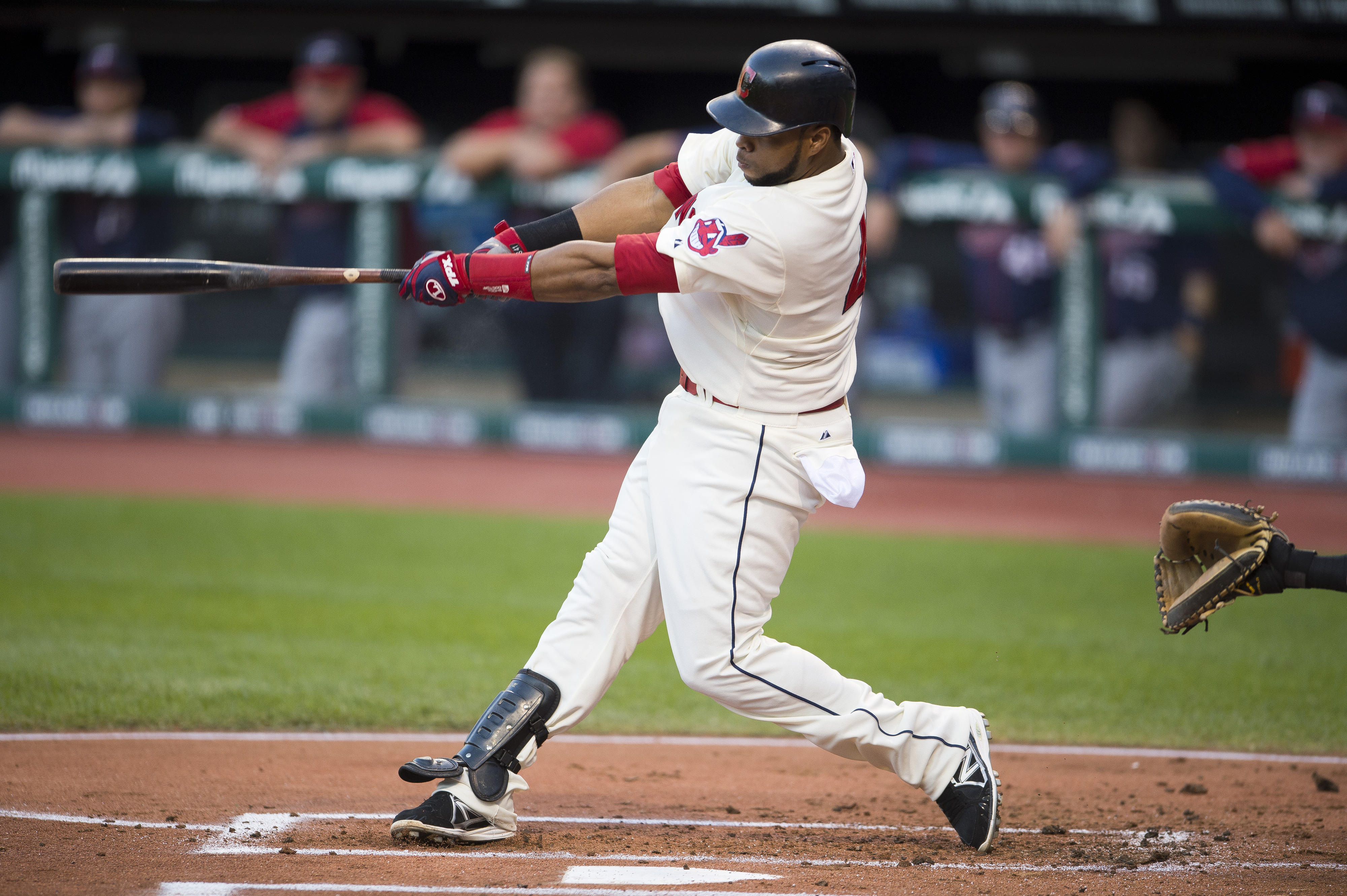 After Carlos Santana hit a two run dinger off of Liam Hendriks in the bottom of the first inning and boosted Cleveland's win expectancy to 71.2%, the Indians never really looked back. Zach McAllister was able to keep the Twins from mounting much of a comeback, giving up just two earned runs over seven and a third. Meanwhile, Hendriks couldn't complete five innings and gave up seven earned runs on seven hits and a walk with zero strikeouts.

More on the Twins at: Twinkie Town More on the Indians at: Let's Go Tribe

Sorry Yasiel Puig. Jose Fernandez deserves the NL Rookie of the Year. Lowering his ERA to 2.30 and his FIP/xFIP to 2.66/3.04, last night was just another incredible performance from the young right hander. Over seven shutout innings, Fernandez (34% WPA) gave up just four hits while notching eight strikeouts. Jeff Manship (-11% WPA) was able to hurl a quality start but couldn't compete with Fernandez's absolute dominance. Nobody except for Michael Cuddyer and Todd Helton stood a chance.

More on the Rockies at: Purple Row More on the Marlins at: Fish Stripes

Wily Peralta and Bronson Arroyo were locked into a pitching duel until Peralta (15% WPA) exited in the fifth having given up one run on seven hits and a walk. From there, John Axford (-45% WPA) melted down in epic fashion, giving up two dingers and three runs over one inning, good for a super small sample size 30.04 FIP. Arroyo ended up tossing another quality start with seven innings of three-run ball.

More on the Brewers at: Brew Crew Ball More on the Reds at: Red Reporter

David Price (-3% WPA) walked in a run and gave up an RBI groundout in the fifth but was otherwise great throughout his six innings. When he left the game, down 2-0, the Rays had a 21.7% win expectancy. Thereafter, Ben Zobrist and Evan Longoria started a rally against CC Sabathia that gave Tampa Bay the lead and shoot their win expectancy to 79%. Because of the rough sixth inning, Sabathia ended with a -25% WPA. Evan Longoria (super small sample size of 1.062 wOBA) blasted an insurance homer in the eighth that practically sealed the deal (95.1% win expectancy) for the Rays.

More on the Yankees at: Pinstriped Bible More on the Rays at: DRays Bay

Raise your hand if you thought Hector Santiago was going to be able to keep up with and compete with Yu Darvish's eclectic arsenal. Well, he did. Through six and a third anyway. Santiago (7% WPA) only had one mistake: a two run homer given up to Alex Rios in the sixth inning but pitched well overall, allowing eight baserunners over six and a third. Darvish struck out eleven over his seven innings but gave up a game tying shot to Adam Dunn shortly after Texas had taken the first lead of the game. The game went back and forth for nearly three innings until Josh Phegley hit a walkoff single against Tanner Scheppers (-35% WPA), who was saddled with a Meltdown.

More on the Rangers at: Lone Star Ball More on the White Sox at: South Side Sox

At one point, there was a competition for Chien-Ming Wang's services this year. After a handful of poor starts with Toronto and another lousy outing yesterday, it's a wonder why he attracted a decent amount of attention. In a spot start against the Astros, Wang (-29% WPA) allowed four earned runs on five baserunners in just three innings as John Gibbons pulled a quick hook. Brad Peacock (9% WPA) survived five and two thirds but had given up two homers and four runs before exiting. Overall, Houston cruised through this game, never having their win expectancy drop below 80% after the second inning.

More on the Blue Jays at: Bluebird Banter More on the Astros at: The Crawfish Boxes 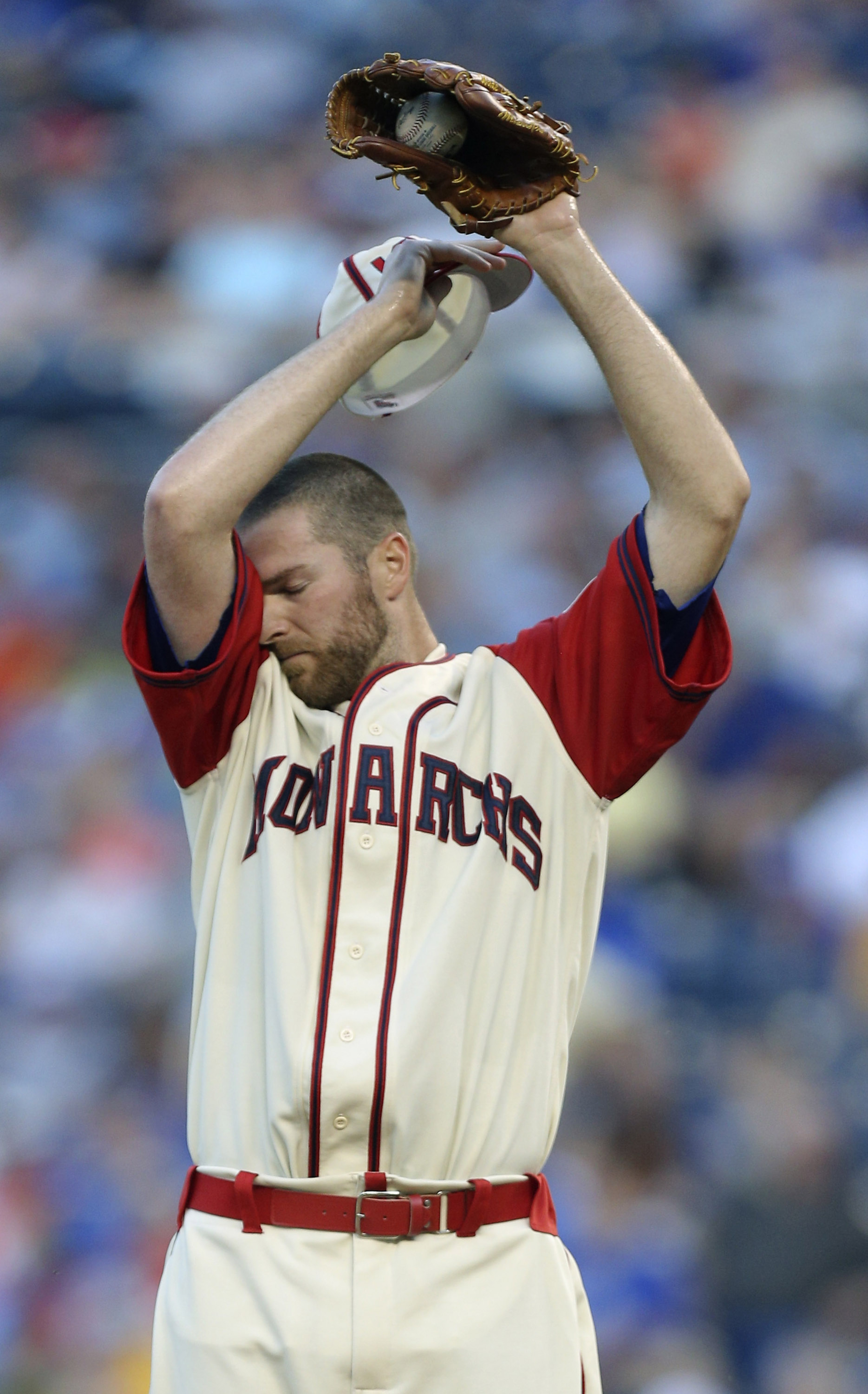 Kansas City only had a better win expectancy than Washington after one event. Once Eric Hosmer singled in the third to bring Alcides Escobar home and tie the game up, the Royals had a 59.7% win expectancy. From there on out, the wheels fell off. Wade Davis (-36% WPA) gave up hits by the bunches and was chased after six innings, having allowing seven earned runs on three walks and eight hits. Jordan Zimmermann (14% WPA) cruised through seven and third thirds while just allowing two runs on eight hits and a walk to go along with seven strikeouts.

More on the Nationals at: Federal Baseball More on the Royals at: Royals Review

Another game that unraveled and become a near guaranteed win for one team. Julio Teheran tried to pitch into the seventh but ran into some trouble and was pulled for David Carpenter, who allowed two inherited runners to score. Teheran (-5% WPA) ended up finishing with six completed innings and four earned runs with five hits and five walks. The Braves, now without Jason Heyward for the rest of the regular season, couldn't really get to Shelby Miller or the St. Louis bullpen. Miller (35% WPA) hurled seven dominant innings, giving up just one run on three hits.

More on the Braves at: Talking Chop More on the Cardinals at: Viva El Birdos

Has Jeff Samardzija righted the ship? Last night, Shark (21% WPA) tossed eight innings of two-run ball with seven strikeouts and has now strung together a couple great outings in a row. Eric Stults was a hard luck loser as he threw a quality start but San Diego simply could not take advantage of their few opportunities against a locked-in Samardzija. Darwin Barney, batting out of the eight hole, provided a 43% WPA with three hits (1.062 wOBA) that included a homer.

More on the Cubs at: Bleed Cubbie Blue More on the Padres at: Gaslamp ball

Francisco Liriano (-30% WPA) stumbled through four innings, giving up nine hits, two walks and four runs, resulting in an early hook from Clint Hurdle. His super small sample size FIP of 3.04 suggested that he definitely got a little bit unlucky but ultimately that put the game in control of San Francisco, who never really loosened their grip on the win expectancy. Tim Lincecum (5% WPA) flashed some dominant stuff as he totaled eight strikeouts in five and a third but four walks caught up to him. Jose Mijares and Jean Machi gave up back-to-back singles to Gaby and Tony Sanchez that allowed two of Lincecum's runners to score. Even after that mid-game rally, the Pirates had only increased their win probability to 25%. It proceeded to drop from there.

More on the Pirates at: Bucs Dugout More on the Giants at: McCovey Chronicles

Erasmo Ramirez (-14% WPA) has had trouble keeping fly balls inside the park since Seattle recalled him. But after giving up a two-run homer to Mike Trout in the top of the first, he was able to settle down and only allow one more unearned run over six and two thirds. Sadly, that wasn't enough to keep the Mariners in the game as Jason Vargas and the Anaheim bullpen silenced the Northwest offense. Vargas (15% WPA) gave up eight hits over six innings but struck out five and minimized the damage to just one earned run. From there on out, Buddy Boshers, J.C. Guiterrez and Michael Kohn combined to strike out five of the last ten batters they faced. Seattle never really sniffed a 50% win expectancy besides an Endy Chavez single that advanced Justin Smoak to third in the fourth inning.

More on the Angels at: Halos Heaven More on the Mariners at: Lookout Landing