Was Adrian Beltre the right choice?

More than two years ago the Rangers chose not to sign the top pitcher on the free agent market, and elected instead to sign Adrian Beltre. Now, almost three years later, both Cliff Lee and Adrian Beltre have continued their successful careers, but did the Rangers sign the right player?

Share All sharing options for: Was Adrian Beltre the right choice?

Would it surprise you if I said it has been almost three years since the 2010-2011 offseason? I know, that isn't an incredible leap of faith, but since 2011, lots of baseball has been played, numerous trades have been made, and even more free agent deals have been struck. In the 2010-2011 offseason, one player stood above most others as the holy grail of the offseason, the player that whichever team managed to sign would almost immediately be declared the winner of the offseason. Cliff Lee had just come off of his second consecutive World Series appearance, his respective teams having failed to win either time. At that time, Lee was a baseball rock star. He proved that he could overcome early and mid-career difficulties by winning the 2008 AL Cy Young Award, becoming a major trade target by numerous contending teams, and then proving his worth by pitching incredible well for those teams in the regular season and the playoffs.

Not far away from Lee, Adrian Beltre entered the 2010-2011 MLB offseason with aspirations of his own. He was a free agent for the third time in his career, and the second time in as many years. After some difficult seasons in Seattle, Beltre could not woo enough suitors to pay the price and commit to the number of years he and agent Scott Boras thought Beltre deserved after the 2009 season, leaving the third baseman to sign a one-year contract with the Boston Red Sox. Beltre played well in his one season manning the hot corner in Boston, hitting a career high 49 doubles and smacking 28 home runs. Beltre was not the best hitter on the market at the time, and in comparison to Lee, he represented less of a catch.

Both men eventually found new teams, with Beltre signing with the Texas Rangers and Lee with the Philadelphia Phillies. Lee had finished the prior season with the Rangers, pitching for them after the non-waiver trade deadline through the end of the regular season, and subsequently in the postseason. The Rangers liked Lee and very much wanted to sign him to a contract to remain a Ranger for the foreseeable future. After weeks of negotiation neither side had found enough middle ground to warrant an official agreement, and since Lee was free to negotiate with any team he chose, the former Phillies lefty took decided to return not to Arlington, but instead to Philadelphia. The two sides agreed on a 5-year contract worth $120 million, or $24 million average annual value. At the time, the only contract ever given to a left-handed pitcher that rivaled such a deal was the one the Yankees gave to C.C. Sabathia.

The manner in which the Phillies swooped in and plucked Lee by offering him whatever the Rangers refused to, left

Overthinking it: who is the best all-around player 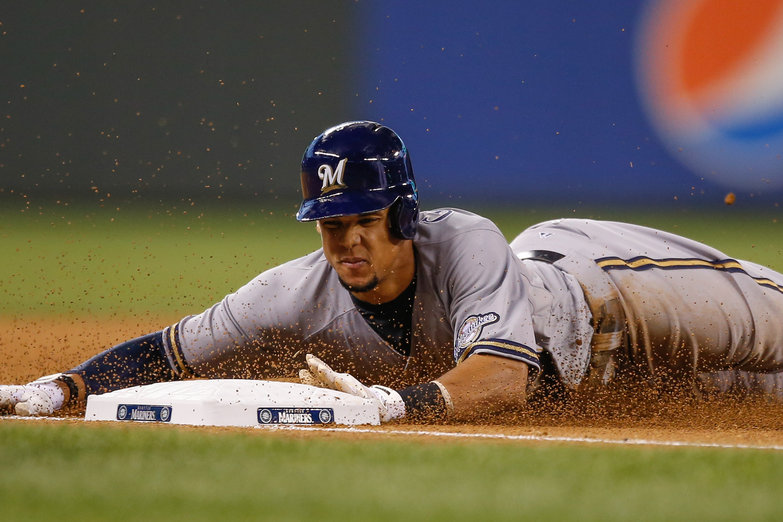 Charlie explores portraying base running, defense, and hitting geometric to find the best player at all three.

Texas with money to spend, production to replace, and their top choice lost to another club. With Lee out of the picture, the next best starting pitcher on the market was probably Hiroki Kuroda, but the right-hander planned on remaining in Los Angeles, leaving the Rangers with very few reasonable free agent options in the as far as pitching was concerned. With that in mind, the team decided to improve in other areas, choosing to find an upgrade at third base. Michael Young had occupied the hot corner for the Rangers for the last few seasons, and given his age, lack of defensive abilities, and the possibility of moving him to 1st base, gave the Rangers the idea to look for an upgrade at third.

So, almost as a consolation prize, the Rangers began negotiations with Beltre, eventually coming o an agreement on a 5-year $80 million contract with an option for a 6th season worth another $16 million. After all the dust had settled, the Rangers still got their second choice, having lost out on Lee to the Phillies. Now that almost three seasons have past, it could prove fascinating to see if losing out on the Cliff Lee sweepstakes has been detrimental to the Rangers, or if the decisions they made have actually proved just as or more beneficial than had they successfully acquired Lee.

In the almost three full seasons that have past since that 2010-2011 offseason Beltre and Lee have both been very productive players.

In fact, using Fangraphs tabulation of wins above replacement, Lee has been the fourth most valuable pitcher in the major leagues since signing with the Phillies, behind only Justin Verlander, Clayton Kershaw, and Felix Hernandez. He ranks forth in the majors over that time frame in RE24 as well (71.18), and has posted the best strikeout to walk ratio of any starting pitcher at 6.21. He is on pace this season to have thrown 200 or more innings in each season since signing in Philly, and he has posted a minuscule 2.87 ERA, 2.92 FIP, and 2.91 xFIP over that time. Based on fWAR, Lee has been worth about $67.8 million, or $22.6 million AAV since 2011. Did the Phillies get a good deal? Yes, Ruben Amaro and the Phillies front office were able to secure the best free agent pitcher who has by most accounts somehow lived up to the slightly bloated contract he signed.

All of Lee's accomplishments aside, what about the Adrian Beltre? He signed a contract for considerably less money, $10 million less per season, than Lee, but could it actually have been the better deal? The answer is almost certainly yes. Since joining the Rangers, Beltre has flourished, posting a 140 wRC+, which places him second amongst all third basemen since 2011, behind only Miguel Cabrera, and tied amongst all position players with Carlos Beltran. If not for Miguel Cabrera's incredible hitting productivity over the last 2+ seasons, Beltre would have been the most valuable third baseman in baseball, ranking behind Cabrera in fWAR over that time span by four and half wins. Unlike Cabrera, Beltre adds much more than just offense, proving himself as one of the best defensive third baseman in baseball. Since signing in Texas, Beltre has won two Fielding Bible Awards, two gold gloves, produced 24 DRS, and 22.0 UZR. Most impressively, Beltre's 16.5 fWAR since 2011 ranks as the 6th most amongst all position players in baseball which places him tied for 5th with Brewers outfielder and former NL MVP Ryan Braun. Overall, Beltre's productivity has been worth $76.5 million over the last 17 months of baseball, $8.7 million more than Lee, while having made $12.5 million less than Lee.

In the end, it's very safe to say that both teams, the Phillies and the Rangers made out well with the players they signed. Lee has performed incredibly well, and given the back-loaded nature of his contract, has outperformed his salary thus far. Still, given Beltre's less expensive contract, and his fantastic output, signing Beltre has proven the smarter and more prudent move. At the time, receiving Beltre instead of Lee was seen not a different but equivalent move, instead the baseball world, and possibly the Rangers, described signing Beltre as a second choice, a backup plan. Maybe the Rangers ranked both Lee and Beltre similarly back then, but the common perception had Lee, due to his recent success, the topography of the free agent market at the time, and to the position he plays, as the more valuable commodity. While both players have performed incredibly well, Beltre has been slightly more productive for considerably less money. Beltre and Lee are the same age, and neither missed more than 50 games in the last 3 years due to injury, proving their durability as well as their productivity.

Every action taken by a team has a ripple effect. By signing Beltre instead of Lee, it left the Rangers with more holes in their starting pitching, which led them to give chances to pitchers who may not have otherwise received them, and has over time, caused the team to look for starters like Matt Garza as suitable acquisitions via trade. On the other hand, a team that makes efficient roster decisions at all times, will usually put themselves in the best chance to succeed given the money spent. Would the Rangers have been just as well off had they signed Lee and not Beltre? Maybe, but the events that transpired have made Jon Daniels and his staff look even better thus far into the respective contracts of Lee and Beltre.

While hindsight remains assuredly twenty-twenty, the Rangers can look back on the decisions made, to not sign Lee and instead sign Beltre, as well as the decisions not made, and feel quite good. Far too often teams make decisions, based on a number of variables, and then get thrashed by fans, pundits, and the like after time has passed. In this case, neither the Phillies nor the Rangers should be at fault, both made shrewd and effective decisions, but fascinatingly, it is the Rangers that come out on top.