Detroit's best starter is not who you think

The Tigers' best starting pitcher is neither Cy Young candidate Max Scherzer nor $180 million man Justin Verlander, but rather someone else.

Share All sharing options for: Detroit's best starter is not who you think

The Detroit Tigers are the envy of almost every team in baseball. Their fifth-best starter, Rick Porcello, has compiled 2.5 WAR and posted a 3.46 FIP in 133.1 innings pitched this season. Overall, Tigers starters have combined for 19.8 WAR so far in 2013, and as fellow Beyond the Box Score writer Neil Weinberg noted earlier in August, the team’s starting rotation is on pace to be among the best ever.

Armed with Cy Young candidate Max Scherzer and $180 million ace Justin Verlander (a Cy Young winner in his own right), the Tigers rotation features two of the best pitchers in baseball. The pair has combined for over 350 strikeouts and a 3.5 K/BB ratio in 2013.

Yet neither Scherzer nor Verlander is Detroit’s best starting pitcher. That title instead falls to right-hander Anibal Sanchez, who has been even better than his two highly regarded teammates despite receiving far fewer accolades from mainstream observers.

Compare some of Sanchez’s stats with those of Scherzer and Verlander in the table below, for example:

In nearly every category, Sanchez bests his two teammates, which leads one to wonder just why the 29-year-old right-hander has flown under the radar so much this season. The reason could be the strained shoulder Sanchez suffered back in June, causing him to spend three weeks on the disabled list and log only 139.2 innings thus far in 2013. It could also be the reputation Sanchez garnered as a good, but not great starting pitcher while with the Marlins.

Either way, over the past calendar year, the eight-year veteran has arguably been the best starter in baseball, with a 25.1% strikeout rate, a 2.42 FIP, and a 58 ERA- in 194.0 innings pitched.

The reasons behind Sanchez’s improvement can be seen in the pitch selection changes he has made in recent seasons. As the graph below shows, the righty’s changeup usage has increased in every year since 2010, and this season, he has thrown his changeup a career-high 23.9% of the time.

That changeup has been particularly devastating in 2013, with the pitch possessing an impressive 40.3% whiff/swing percentage, which represents the ninth-highest mark of any changeup in baseball. The offering has been especially tough on lefties, yielding a .059 ISO against as Sanchez has buried the pitch down and away to left-handed hitters. 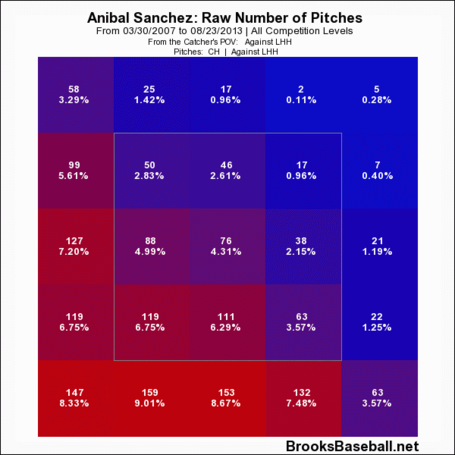 In addition, Sanchez uses his slider and four-seam fastball to create a dominant three-pitch mix that has accounted for roughly 80% of all his offerings in 2013. Coupled with his changeup, Sanchez’s slider gives him two strong secondary pitches to play off his fastball, and the right-hander is unafraid to throw either pitch in any count. According to Brooks Baseball data, for instance, Sanchez throws his change or slider over 45% of the time when down in the count.

Such numbers demonstrate why Sanchez’s swinging-strike percentage is at a career-high level (11.9%) in 2013. Opposing hitters have little idea what pitch the right-hander will throw next, and the right-hander’s contact rates, both in and out of the strike zone, have dropped in three straight seasons as a result.

You won’t hear Anibal Sanchez’s name in most discussions for the American League Cy Young Award, but perhaps you should. The 29-year-old has been the best starter on his own team and among the best in baseball for over a year now. Combined, moreover, with Scherzer, Verlander, and the equally underrated Doug Fister, Sanchez makes the Tigers a formidable opponent for any team come October.

All stats courtesy of Brooks Baseball and FanGraphs. Thanks to Neil Weinberg for research help.

Alex Skillin is a regular contributor to Beyond the Box Score and also a Staff Editor for SoxProspects.com. He writes, mostly about baseball and basketball, at a few other places across the Internet. You can follow him on Twitter at @AlexSkillin.