From a career milestone for a top second baseman to a debut from one of the game's best prospects, yesterday's games had a bit of everything. We cover it all in the morning's smallest sample size! 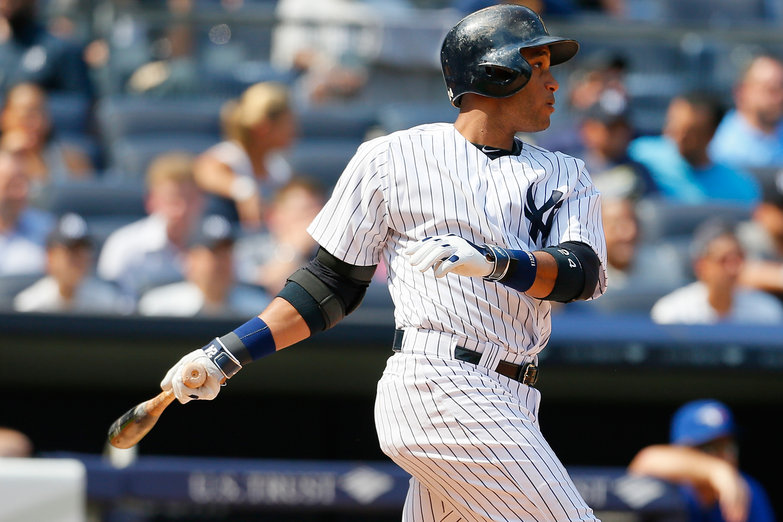 Despite a 4-4 day which included his 200th career homerun, Robinson Cano was not the star in the Yankees' game one victory over Toronto. No, that honor goes to Chris Stewart (.382 WPA) whose two-out, go-ahead three-run homer in the sixth inning took the Bombers' win expectancy from 38.4% to 82.3%. From their the bullpen was able to nail down the win, pitching two and two thirds without allowing a Jays' hit.

More on the Yankees: Pinstriped Bible More on the Jays: Blue Bird Banter

In the nightcap of this doubleheader, solid pitching peformances from Phil Hughes and Mark Buehrle made the game 2-1 heading into the bottom of the seventh inning, when none other but Jayson Nix decided to take matters into his own hands. Nix (.350 WPA) hit a game tying solo shot to chase Buhrle in the seventh and then walked the Yankees off by scoring pinch runner Ichiro Suziki from third on a ninth inning single. Mariano Rivera worked the top of the ninth to earn the win. Suzuki, by the way, entered the day three hits short of 4,000 between his time in MLB and the Japanese professional league, but he will have to wait at least another day to reach the milestone as he had only two hits in the first game and did not bat in the night cap.

More on the Yankees: Pinstriped Bible More on the Jays: Blue Bird Banter

In a series that is decidedly big for both sides, Tampa Bay is doing a fine job of creating some breathing room between them and the O's. Tonight's win came can largely be credited to the Tampa relief crew, especially Alex Torres. Torres entered the game in the seventh inning with no outs and the bases juiced and he induced a run-scoring double play from Brian Roberts and a strikeout from Nate McClouth to keep a 3-2 lead. Tampa then tacked on four more runs on a two-run double by Matt Joyce and a two-run single from Wil Myers. Baltimore did make it interesting in the ninth with a Matt Wieters two-run blast creating a save situation, but Fernando Rodney shut the door for his 29th save of the year.

The story in this game begins and ends with White Sox' starter John Danks. Danks (.527 WPA) shut out the Royals over eight innings, allowing seven hits and a walk with two punchouts to earn his first win in his past nine starts. This game also marked the first time this season that the lefty allowed no runs in a game, giving up at least one in each of his other 16 starts. With the dominant performance, he improved to 5-0 lifetime against KC and his ERA dropped from 4.54 to 4.22 on the season. The two runs came courtesy of a Gordon Beckham solo bomb and a second inning passed ball by Salvador Perez. Finishing off Danks' gem was Addison Reed, who worked a 2.53 LI ninth inning for his 32nd save.

More on the White Sox: South Side Sox More on the Royals: Royals Review 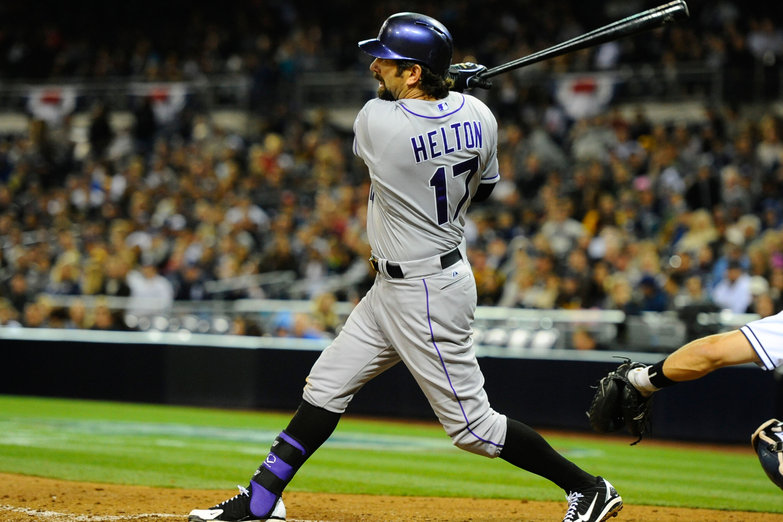 On Todd Helton's 40th birthday (man, do I feel old) the Rockies were able to send their franchise's best player home with a W, taking down the Phillies by a score of 5-3. All eight runs in the game scored within the first three innings, with the big blows for Colorado coming on homeruns from Troy Tulowitzki and Wilin Rosario. After that, the pens shut it down, combining to throw 5.2 scoreless innings between the two sides. As for Helton, the slugger went 0-4, but for the younger generation out there that may not remember what a great player he once was -- Helton once had a five year stretch (00-04) in which he was worth 34.7 fWAR and he has a .406 wOBA and 132 wRC+ for his career, remarkable totals.

More on the Rockies: Purple Row More on the Phillies: The Good Phight

If Justin Morneau wants to get out of Minnesota, he made a good case to just that on Tuesday night. Morneau (.327 WPA) homered and doubled, driving in four runs in a four-hit day to lead the Twins to a win over Detroit. Morneau's hitting came in support of starter Mike Pelfrey (.161 WPA) who picked up his fifth win of the year. The win didn't come easy, however, as closer Glen Perkins needed to strikeout Miguel Cabrera with Austin Jackson on first base to end the game.

Paul Goldschmidt delivered the big hit, an eighth inning grand slam, and Patrick Corbin had another fine game to lead the D'Backs to a win. Goldschmidt's slam was record-setting as well; it gave him a franchise best three grand slams on the season, as well as making him the first National League player to reach the 100 RBI plateau. Despite that, his 0.72 WPA actually was good for just third on the team after Martin Prado's .144 and of course Corbin's .500. Corbin's complete game featured ten strikeouts and just six hits allowed. The win moved him to 13-3 on the year, with a 2.45 ERA and 3.03 FIP.

Zack Wheeler may not have things figured out against every big league club, but the team with the best record in the majors seems to be no problem for him as the rookie moved to 3-0 with a 2.89 ERA against Atlanta Tuesday night. He took a shutout into the seventh. departing after six and two thirds, allowing just three earned runs. Filing in behind him was MLB appearances leader, Scott Rice who worked the highest leverage situation of the game (2.72 LI) and continues to be an amazing story as a 31-year-old rookie. Offensively, Ike Davis (.149 WPA) was the big bopper for the Mets, launching an eighth inning homerun and also driving in a run in the first with an RBI single. 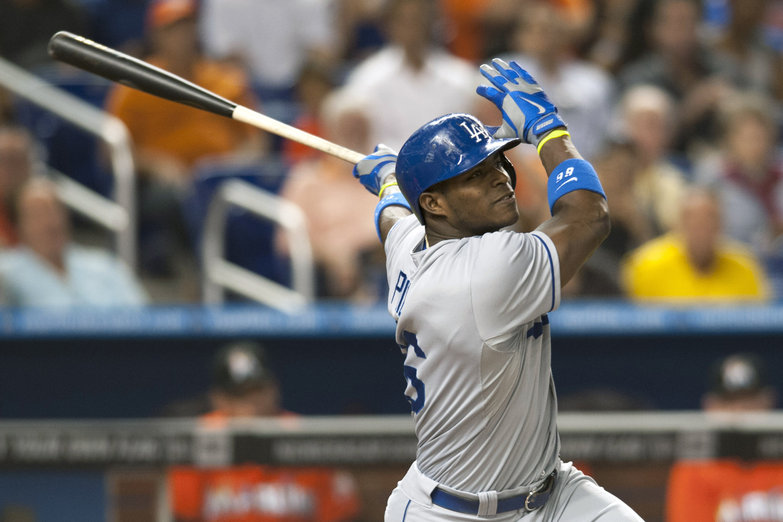 Apparently nothing can hold Yasiel Puig down, as the 22-year-old rookie hit the go-ahead homerun in the eight inning despite being fined for being late and not being in the starting lineup. Puig (.243 WPA) entered the game in the sixth inning as part of a double switch, but the decisive at bat in the eighth inning was his first trip to the plate. The win snapped a two-game losing streak for LA, their longest in two months.

In a battle of a the lone star state, the (ever so slightly) better team emerged victorious, thanks to Adrian Beltre. Beltre (.296 WPA) doubled and homered, and if not for an amazing trio of AL stars, he would be getting serious MVP consideration for the season he is putting together for the Rangers. The win was credited to Neal Cotts and Joe Nathan struck out the side in order for his 37th save in 39 chances this season to end it.

More on the Rangers: Lone Star Ball More on the Astros: Crawfish Boxes

Another Dan Haren start, another win for the Nats. Since returning from the disabled list on July 8, Haren is 4-2 with a 2.20 ERA and he was good again last night, limiting the Cubs to just one run over six frames, striking out six. The Cubs will look to turn things around tomorrow when they send Jake Arrieta to the mound.

More on the Nationals: Federal Baseball More on the Cubs: Bleed Cubbie Blue

After three unsuccessful tries, Kyle Lohse was finally able to defeat his former team. Lohse and the Brewers fell behind 3-0 after four innings, but the righty kept it together and the offense came alive to score six unanswered runs. Leading the charge was Sean Halton who drove in three runs and finished with a .179 WPA.

Just one extra innings game last night, and this was the one. Through regulation the score was deadlocked at one a piece, thanks to homeruns by the Bat of Reason, Carlos Santana, and J.B. Shuck. Other than that both C.J. Wilson and BtBS fav Danny Salazar stifled the opposing offense. The score would remain tied until Joe Blanton entered the game in the 14th inning and promptly gave up a two-run homer to Drew Stubbs, which proved to be the game winner. 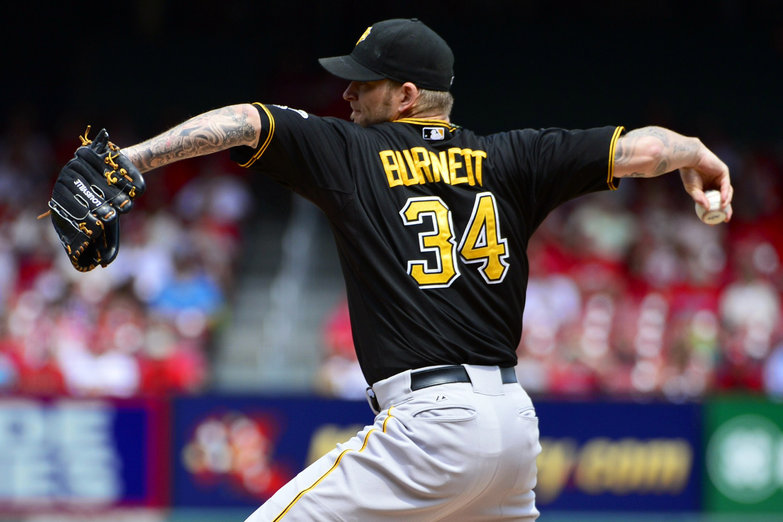 A.J. Burnett limited the Padres to four hits in seven innings of work and the Pirates' bats took care of the rest Tuesday night. No real standout offensive performance, but six extra base hits keyed the Pittsburgh attack. The real story was Burnett, who was dominant yet again this year, and the Bucs' defense which featured some stellar plays from both Jose Tabata and Jose Alvarez. That's been the recipe for success for Pittsburgh all year, and it worked once again.

In a contest dominated by rookies, the M's defeated the A's. Rookies Brad Miller (.208 WPA) and Nick Franklin (.203 WPA) led the way for the Mariners. Miller was 2-5 with a run driven in and Franklin connected for his 11th homerun as part of a 2-4 day. Even on the A's side, the one strong performance came from rookie hurler Sonny Gray (.199 WPA) who allowed just four baserunners while striking out seven over seven innings. And one of my favorite pitchers, Danny "Lord" Farquhar nailed down the save in the ninth. Farquhar now has a 4.79 ERA, but a 1.76 FIP and 2.16 xFIP on the season.

More on the A's: Athletics Nation More on the Mariners: Lookout Landing

Even though he was 0-3, today may long be remembered as the first big league game in 20-year-old Xander Bogaerts' career. The Sox' top prospect was hitting .297/.388/.477 with 15 homeruns in the minors this year, and he could be pretty special. Unfortuantely, all of that was masked today by this:

WHERE IS THE PANIC BUTTON?

San Francisco's walkoff win dropped Boston to 2-5 in their last seven games and it seems that fans are already having flashbacks to the epic collapse from two years ago. The story came down to Brandon Belt and Marco Scutaro combining for a .759 WPA and Brayan Villareal not being able to come through in the biggest leverage spot in any game of the day, a 6.41 LI.

More on the Red Sox: Over the Monster More on the Giants: McCovey Chronicles