Three games were decided by seven or more runs last night. While two teams of offensive juggernauts lit up their respective opponents, one surprising team erupted for five homers.

There were some awesome pitching performances last night but then there were a handful of downright awful showings that practically guaranteed their team's loss within the first four innings. In other news, the race for the AL East is going to be one fun ride with the Rays and Orioles matchup already feeling like a playoff matchup. And there's no question that Francisco Liriano has been the best offseason signing in 2013, right? 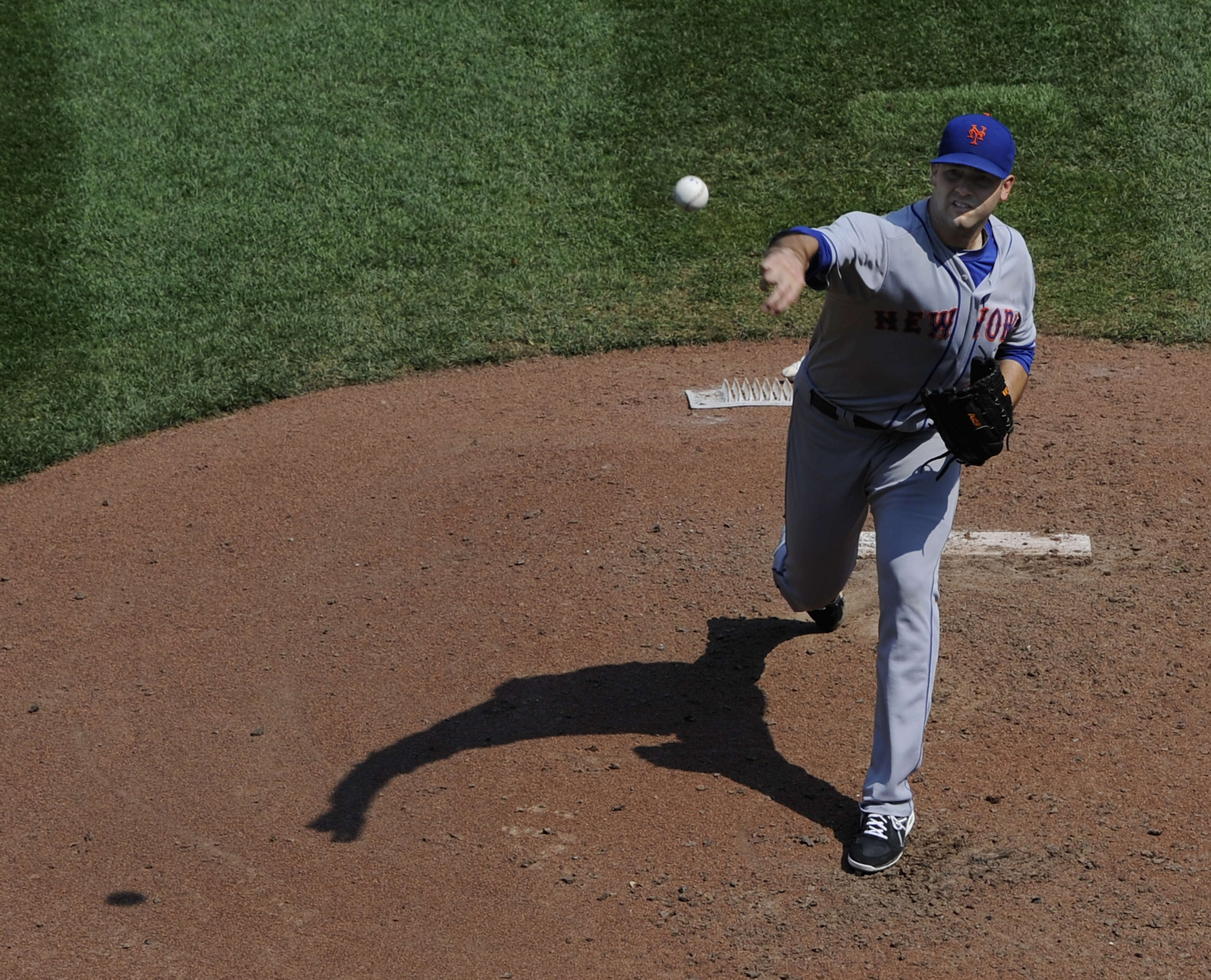 Dillon Gee pitched great yesterday, holding the Twins to one unearned run over seven and two thirds. With only six hits and a walk, he notched nine strikeouts and provided a 31% WPA. On the other hand, Kyle Gibson just can't miss many bats in his first stint at the major league level, which seemed to end after yesterday's start since he was demoted back to the minors. Giving up ten hits, two walks and four runs in under four innings to the Mets, Gibson (-20% WPA) didn't really pitch in very intense situations but still struggled. Anthony Swarzak, Brian Duensing and Jared Burton were able to combine for nine strikeouts of 21 batters faced whereas Gibson could only sit two out of 20 down via the K.

More on the Mets at: Amazin' Avenue More on the Twins at: Twinkie Town

Ethan Martin (14% WPA) was cruising through six innings but apparently tired, lost some velocity and was tagged for a two runs, one coming off a monster homer to Troy Tulowitzki. Still, with a 5-2 lead at the end of the seventh inning, the Phillies had a 94.8% win expectancy. But the game had to be handed to the woeful Phillies bullpen, which means anything is possible. Hairdresser turned reliever, Luis Garcia (-27% WPA), melted down and allowed Colorado to get back into this game with two runs scored. We were treated with a rare Jonathan Papelbon (15% WPA) appearance, who came in and slammed the door shut on the Rockies.

More on the Rockies at: Purple Row More on the Phillies at: The Good Phight

Last night's matchup between the Rays and Orioles had the pace of and felt like a playoff game. Chris Tillman (-16% WPA) gave up two dingers in six innings and ended up being charged for all four runs. The Baltimore bullpen was able to keep the Rays off the board for the rest of the game but it proved to be too much of an uphill battle for their offense. David Price (8% WPA) was a little leaky, having given up ten hits and two walks in just five innings. Joel Peralta (-14% WPA) melted down and gave up a homer to Matt Wieters later in the game but Tampa still had a 63.2% WPA. Fernando Rodney (21% WPA) danced around a hit and a walk but was able to shoot 'dem arrows and secure an important win for the Rays.

Arizona fell behind early, tied it up and then Randall Delgado immediately gave the game away. Finishing with a line of seven hits, three walks and five earned runs in six innings, Delgado himself (-28% WPA) ended up hurting the Diamondbacks' chances more than the entire lineup. Bronson Arroyo (5% WPA), quality start king, hurled another one while being tagged for three earned runs in six innings. J.J. Hoover, Aroldis Chapman and Manny Parra were able to keep Arizona's bats silent for the remaining three innings and combined to see only two batters over the minimum.

More on the Diamondbacks at: AZ Snake Pit More on the Reds at: Red Reporter 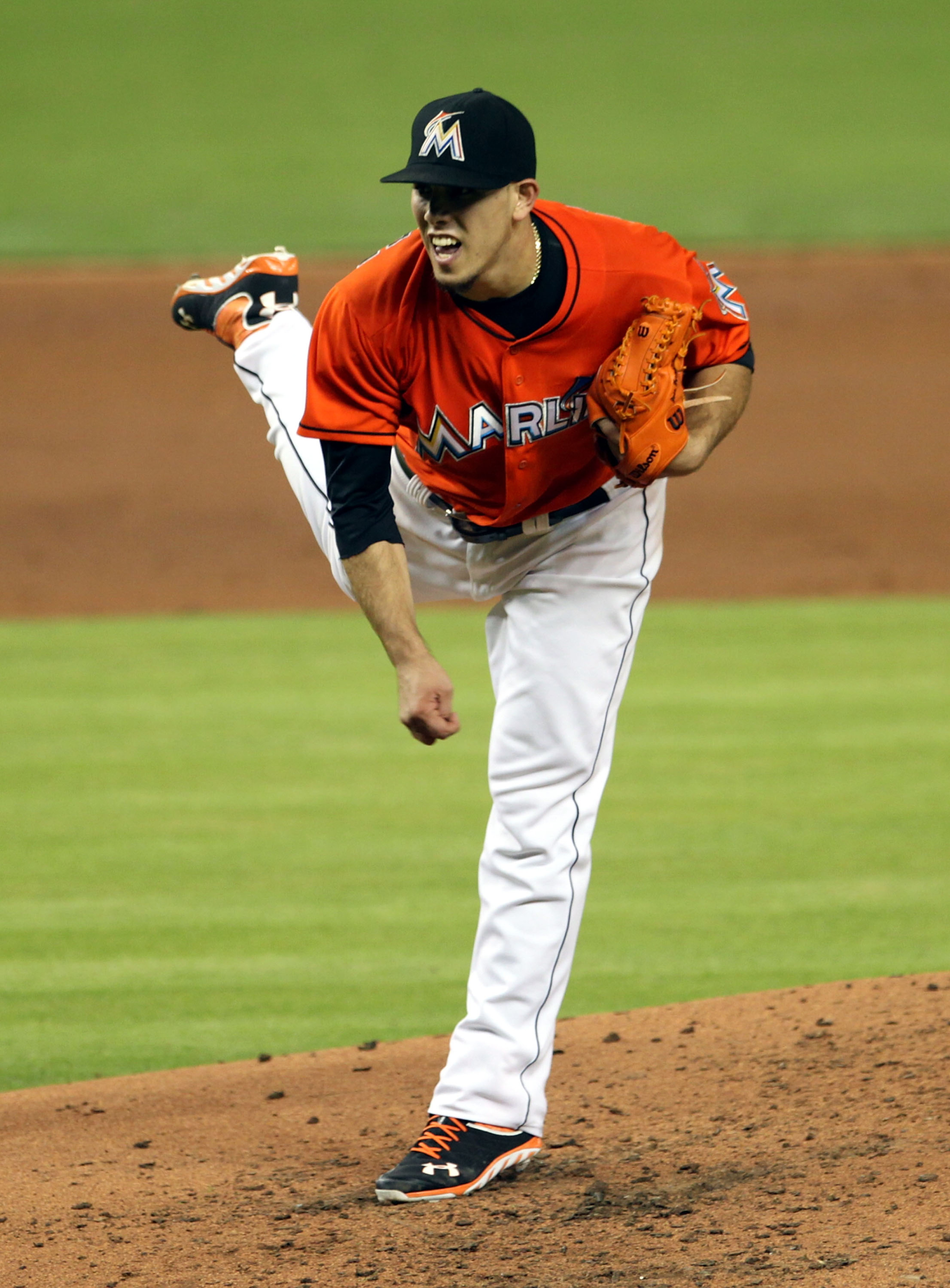 Jose Fernandez has had my NL Rookie of the Year vote for a couple weeks now but last night's dominant performance likely won over some more voters. Facing one of the hottest offenses in the league, Fernandez (5% WPA) held the Dodgers to two runs (one earned) on four hits and three walks while racking up eight strikeouts. Hyun-Jin Ryu (-10% WPA), another ROY candidate, was almost as great but gave up a Logan Morrison double with runners in scoring position, giving the Marlins the lead in the sixth. After Ryu's exit, Los Angeles struggled to get two outs from their bullpen as three more runs were given up in just one third of an inning.

More on the Dodgers at: True Blue LA More on the Marlins at: Fish Stripes

The Rangers barraged 16 runs on the Astros, nine of which were tagged to Lucas Harrell (-37% WPA), who only managed seven outs and faced just 17 batters. Matt Garza could have thrown meatballs down the middle of the plate for most of the game and it probably still wouldn't have been close. He ended up allowing five earned runs in six and two thirds with eight hits and eight strikeouts. At the end of the third, the Rangers had a 99.2% win expectancy. Could Garza have been pitching to the score??!

More on the Astros at: The Crawfish Boxes More on the Rangers at: Lone Star Ball

Another blowout! Jordan Zimmermann (3), Fernando Abad (1) and Ian Krol (1) gave up a total of five dingers to the Cubs! Nate Schierholtz (25% WPA) was seeing beachballs at the plate and smacked two homers and a super small sample size 1.364 wOBA. Donnie Murphy chipped in a pair of homers and a 1.047 wOBA too. Zimmermann (-31% WPA) only lasted five innings and gave up eight runs on nine baserunners. Jeff Samardzija (19% WPA) got his control back, for the time being anyway. He tossed a complete game while only giving up six hits and one run that came on a Wilson Ramos homerun.

More on the Nationals at: Federal Baseball More on the Cubs at: Bleed Cubbie Blue

Please kill the win. Michael Wacha, in relief, allowed three runs on four hits in an inning and posted an awful -50% WPA that originally gave the Brewers the lead in the seventh but was credited with a win. If it wasn't for Brandon Kintzler having an epic meltdown (-48% WPA), Wacha would've been in line for the loss. But instead, he contributed nothing but a negative winning probability and was bailed out by Matt Adams and the St. Louis offense.

More on the Cardinals at: Viva El Birdos More on the Brewers at: Brew Crew Ball

The Indians staked out a four run lead against Jered Weaver in four innings and never looked back. Although Zach McAllister gave a run back in the bottom of the fourth, Cleveland's win expectancy never dropped below 70.6% after their offensive outburst. Weaver (-18% WPA) gave up eight hits and four runs, two of which came from a homer off the bat of Lonnie Chisenhall in six innings. McAllister (22% WPA) posted a quality start, allowing just one run in six and a third on five hits.

More on the Indians at: Let's Go Tribe More on the Angels at: Halos Heaven

Jarrod Parker (42% WPA) hurled a complete game, giving up just one run on eight hits with an equal amount of strikeouts. Aaron Harang (20% WPA) was pretty good as well, just allowing one run over seven innings. Carter Capps melted down in the ninth thanks to a walk-off solo homer (43.2% WPA) off the bat of Brandon Moss. Moss and Jed Lowrie were the only ones to record extra base hits off of the Mariners, with Moss' being the ultimate difference maker. 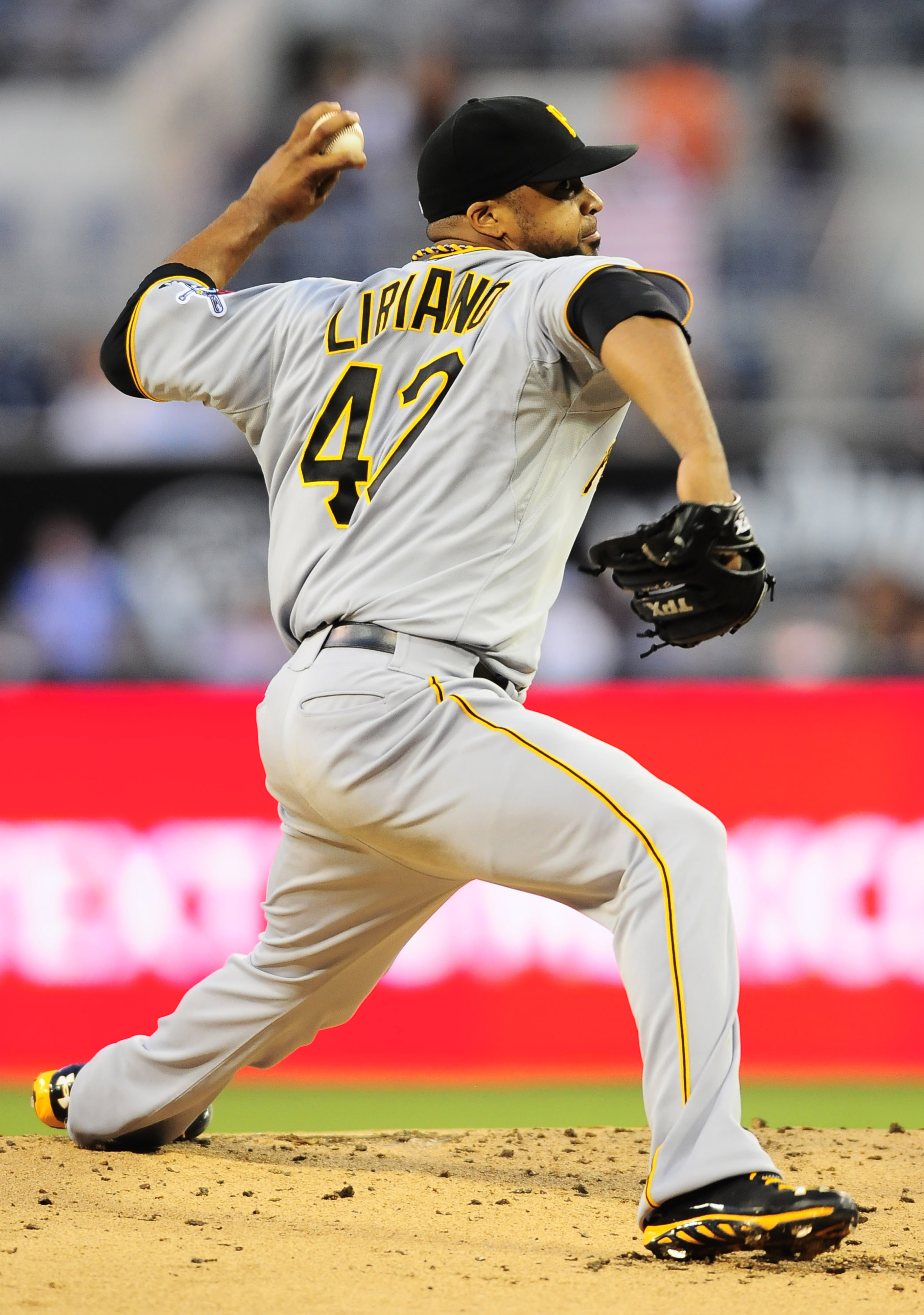 Andrew Cashner (-9% WPA) was the hard luck loser of the day last night. Only giving up one earned run over seven innings, he allowed five hits and two walks but the Padres didn't stand a chance against a lights-out Francisco Liriano (36% WPA). The best offseason signing spun seven shutout innings, striking out thirteen and allowing just six baserunners. Pedro Alvarez (27% WPA) basically provided the entire offense for the night for Pittsburgh and proved to be all that Liriano and the bullpen needed to walk away with a win.

Tim Lincecum (-25% WPA) can't stop teasing us. First he's throwing a no-hitter and striking out 13, then he's giving up eight runs in under four innings before reeling off three consecutive starts of seven innings or more and less than two earned runs. He imploded in his previous start against Washington and did so again last night against the Red Sox. Struggling with his control, Big Time Timmy Jim gave up four walks, nine hits and five earned runs in just five innings. Jon Lester (24% WPA) was in hot pursuit of a complete game shutout but gave up back-to-back singles in the ninth that convinced John Farrell to pull the hook.

More on the Red Sox at: Over The Monster More on the Giants at: McCovey Chronicles