Justin Masterson had a disappointing 2012 season, but is looking more like a frontline starter again in 2013 thanks to a big jump in his strikeout rate.

Share All sharing options for: Justin Masterson tries the strikeout

Entering Sunday, Justin Masterson was baseball's 20th best starter by fWAR and ranked 10th in the American League. Over 175.2 innings, Masterson has easily been the Indians' best starter and is having a strong season after struggling in 2012 compared to his fine 2011 campaign. When looking at 2010 to 2012, his 2011 season looks like an outlier driven by a very poor HR/FB% and an uncharacteristic decrease in walk rate, but Masterson isn't getting lucky on fly balls this time around. In 2013, he's turned himself into a strikeout artist.

Let's take a look at his numbers across each of his four full seasons as a starting pitcher:

He's getting help from from a lower BABIP this year but his HR/FB% is in line with what we'd expect based on his career and league averages. He's walking fewer than last season, but more than in 2011. His run prevention and expected run prevention are all back on track and the big thing that jumps out is the increase in K/9. Let's take a look at it using K% and BB%. 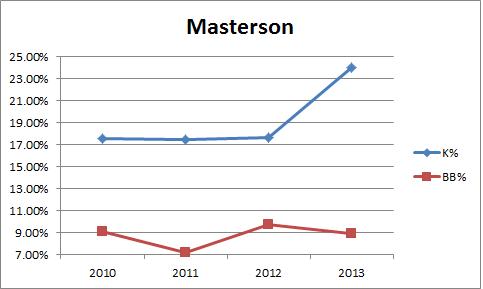 Masterson's BABIP is better this year than in 2011, but his HR/FB% is in line with a more sustainable expectation, which likely cancel each other out. The big difference is the strikeout rate and it's a big difference in strikeout rate. Masterson is having an excellent season because he's combined his ability to induce ground balls with an above average ability to get batters to strikeout. How has he made this change?

First let's consider how he's mixing his pitches by looking at the PITCHf/x data available on FanGraphs:

Masterson has always been a sinker, slider pitcher but PITCHf/x data indicates he's bouncing back and forth between four seam and two seam fastballs (perhaps a classification issue) with the big difference this season being a sizable increase in his use of the slider.

You'll also notice that Masterson is getting batters to swing at pitches outside the zone at the same rate as previous seasons but they're swinging and missing more often when they do. Additionally, he's getting batters to take pitches in the zone more frequently, which is a pretty good formula for improving your strikeout rate. You want batters swinging at pitches out of the zone and taking pitches in the zone. Greg Maddux would be proud.

Also of note for Masterson is improved performance against LHH. He's doing better against RHH as well, but even at his worst he was still pretty effective against them. His strikeout and walk splits are pretty interesting, too.

He has cut his walks to RHH, but the strikeout spike is happening against RHH and LHH despite the fact that Masterson is throwing more sliders. You might expect to see RHH strikeout more against more sliders, but we tend to think that sliders are less effective against opposite hand hitters. What's even more puzzling is that Masterson's slider has less vertical movement this year according to PITCHf/x and vertical movement is usually what erases platoon splits. If anything, the split should be getting larger and not smaller.

Masterson's big improvement this year has been his strikeout rate and he's making it happen with more swings and misses outside the zone and more takes inside the zone. He's doing it to lefties and righties by utilizing the slider more often, even though the slider doesn't appear to have improved. And according to data available at Brooks Baseball, he is throwing the slider more often to both LHH and RHH while throwing it more often in every type of count.

The difference I see for LHH is that they are taking his sinker for strikes more often in 2013 than they did in 2012, swinging at it about 7% less often and getting about 8% more strikes, according to Brooks. RHH are swinging more often on the slider in addition to swinging and missing more often as well.

It isn't really clear why this is happening for Masterson because his actual pitches look very similar in both seasons. He's throwing fewer "hanging fasballs" that don't move very much (but he didn't throw that many before) and his release point is much cleaner, but neither of those really explain why he's striking out so many more batters given that his pitches aren't moving dramatically differently overall.

The best explanation I can offer is that by throwing his slider more often this year he's made both his pitches better by casting doubt in the minds of hitters. LHH aren't hitting his slider as well in 2013 because it's coming more often and in a less predictable pattern. As a result, they're looking for sliders more often than they used to and when they get the sinker they're frozen and helplessly watch it land in the zone. RHH always had trouble with Masterson's slider, so it's not surprising that throwing it more often is an effective strategy. They have a tough time hitting it and it's making the fastball better because they have to look for the deadly slider more often.

Masterson's return to the upper ranks has come largely from an increase in K% that correlates with an increased use of his slider to lefties and righties across all counts. By using that pitch more often, even though it hasn't gotten measurably better in terms of velocity or movement, he's made hitting against him more difficult because hitters are less confident about the pitch they are about to get. When you boil it down, baseball is just a battle over control of the strikezone.

Many thought Masterson was destined for the bullpen after last season's regression because he had so much trouble with lefties, but his willingness to trust the slider more often has made him a better pitcher even if it isn't a slider that should give lefties too much trouble. Merely the presence of the second pitch is enough to keep hitters from locking in and crushing him. It remains to be seen if Masterson can keep this up without the league catching on and adjusting, but for now, Masterson has turned himself into a high ground ball, high strikeout pitcher and it's working quite well for the Indians.