There were more than a handful errors throughout Sunday's games and one blazing hot team had their win streak snapped because of a pair of inconvenient errors on routine groundballs in the ninth inning.

Sunday featured a ton of starters getting shelled but it seems that they weren't helped too much by the defense behind them. The Dodgers could directly see that their game was lost on two errors by Hanley Ramirez in the worst situation! 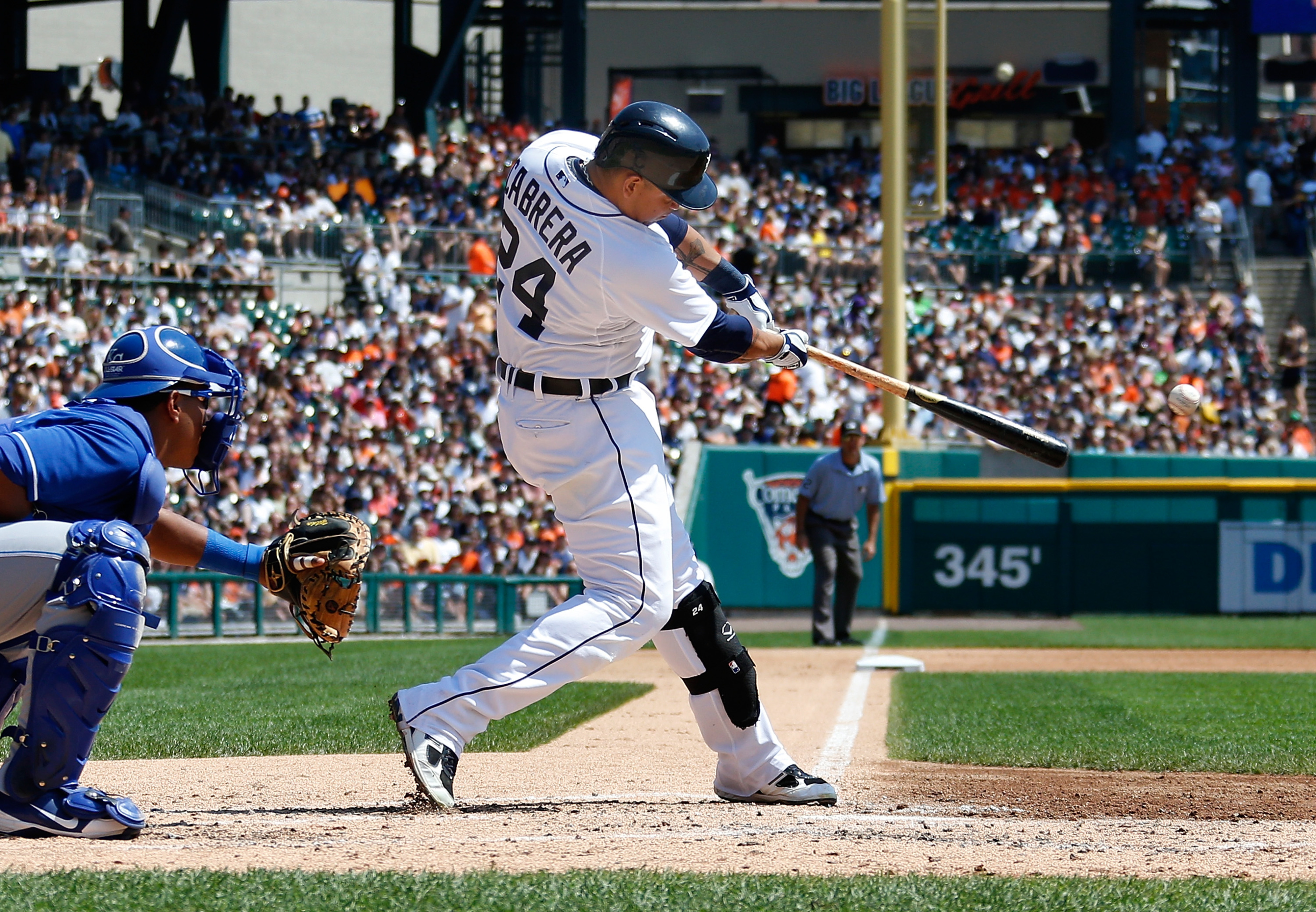 A matchup between a great lineup that features the best hitter in baseball versus a soft tossing pitcher due for some serious regression turned out just like you'd expect it to. Bruce Chen (-20% WPA) gave up six runs on eight hits and a walk in five and a third. Max Scherzer (29% WPA) didn't really face much competition (.66 pLI) and cruised through eight innings, only allowing two runs on five hits. The who-can-hit-the-most-homers battle between Miguel Cabrera (24% WPA) and Chris Davis continued yesterday as both smacked dingers.

More on the Tigers at: Bless You Boys More on the Royals at: Royals Review

Tom Koehler (-28% WPA) and Madison Bumgarner (-30% WPA) were both erratic yesterday and gave up the leads that their offense had staked for them quickly. Koehler walked four and gave up seven hits over five innings but was only tagged for three runs. Bumgarner walked four as well but gave up two less hits yet was charged with four runs. With a 4-3 lead, Mike Dunn (-40% WPA) melted down, allowing two runs on three hits and a walk while only recording two outs. Of course, the Giants continued the trend that was going on all game and Guillermo Moscoso (-30% WPA) gave the lead up. Jeff Mathis (36% WPA) had a 1.121 wOBA in a super small sample size of four plate appearances and had the game winning double that scored Ed Lucas from first.

More on the Giants at: McCovey Chronicles More on the Marlins at: Fish Stripes

Pittsburgh had quite the rare achievement yesterday. Technically, they received two quality starts in one game! Charlie Morton (8% WPA) only gave up two runs over seven innings with ten base runners and Kris Johnson (15% WPA) pitched another six innings and gave up the other two runs on five hits and two walks. Adam Eaton had four hits in eight plate appearances, good for a 51% WPA, 42% of it coming from the 16th inning double that scored two runs to ice the game. The Diamondbacks were able to get five Shutdowns from their bullpen after Wade Miley exited and kept the game alive long enough for the clutch double.

More on the Diamondbacks at: AZ Snake Pit More on the Pirates at: Bucs Dugout

Baltimore was led by tremendous performances from Adam Jones and Chris Davis and breezed through Jhoulys Chacin (-11% WPA) and the Rockies. With two homers between them, they combined for a 30% WPA and Scott Feldman (15% WPA) kept the Colorado offense from getting them back into the game.

More on the Rockies at: Purple Row More on the Orioles at: Camden Chat 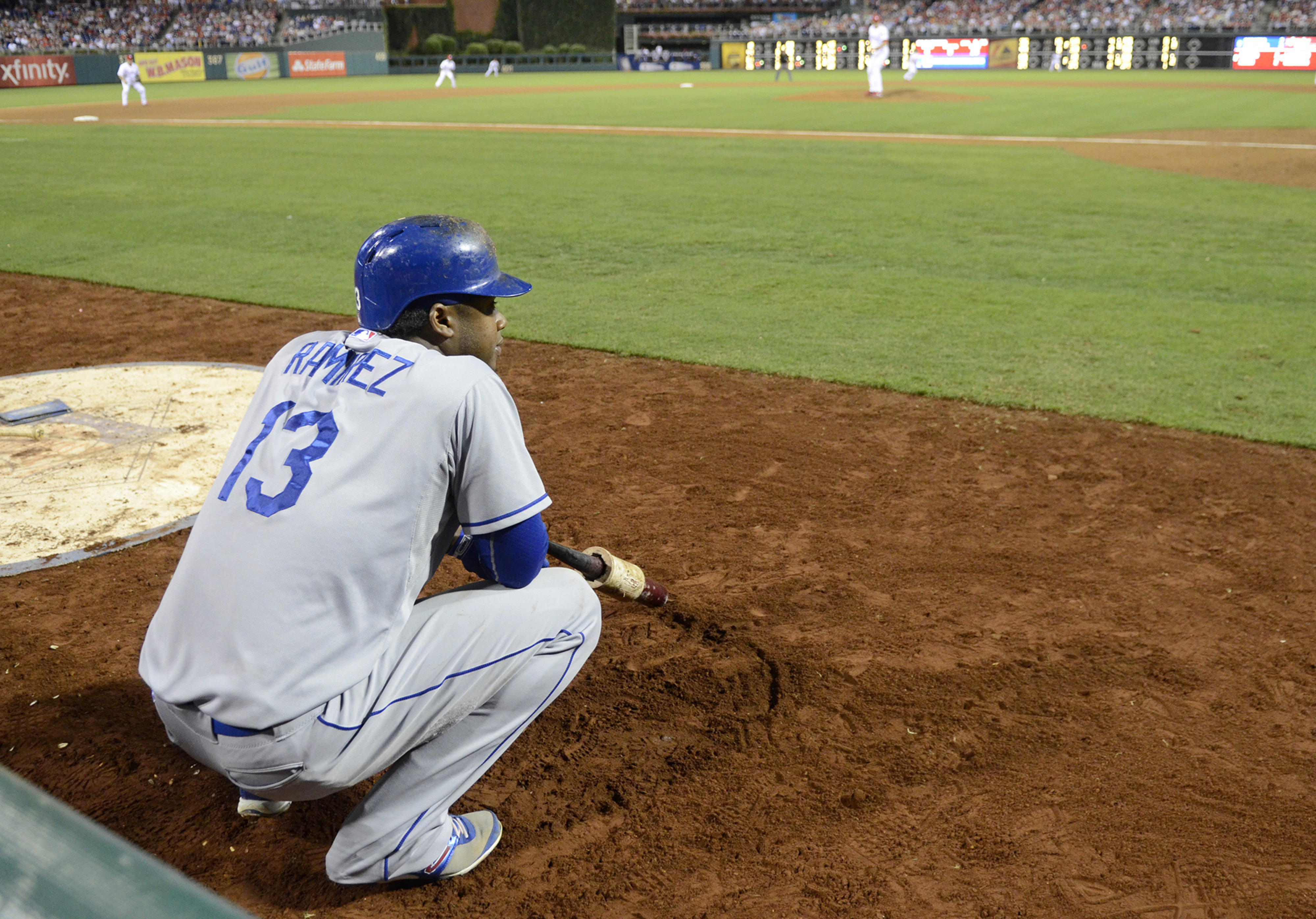 If you take Carlos Ruiz (33% WPA) out of yesterday's game, the Phillies only managed three hits and two walks but still came away with a win. Cole Hamels (14% WPA) continued his second half surge, allowing just two runs over seven innings with eight strikeouts. Ricky Nolasco tossed a quality start as well but the game was eventually lost on two Hanley Ramirez errors on routine groundballs to short. Hey, at least the Phillies scored a legitimate run for Ryne Sandberg!

More on the Dodgers at: True Blue LA More on the Phillies at: The Good Phight

Despite the score being 2-1, Atlanta was in complete control for nearly the entire of the game. Their win expectancy only dropped below 75% after the fourth inning once, when Jayson Werth singled in the lone run for Washington. Julio Teheran (32% WPA) was lights out and tossed six shutout innings with five strikeouts. Gio Gonzalez threw a quality start with seven innings of two-run ball and nine strikeouts but the Nationals just couldn't figure out Teheran and the impressive Atlanta bullpen. It really is amazing what the Braves have gotten out of their bullpen since the losses of Eric O'Flaherty and Jonny Venters.

More on the Nationals at: Federal Baseball More on the Braves at: Talking Chop

Ice cream for Jose Lobaton! Todd Redmond only gave up one run over six innings but still posted a -11% WPA, likely because Chris Archer (20% WPA) was lights out until the seventh when he surrendered a solo homer to Edwin Encarnacion. The Tampa bullpen was excellent, recording three Shutdowns in relief of Archer's great start. Brad Lincoln (-38% WPA) only recorded one out before melting down and allowing the solo dinger (43% WPA) to Lobaton.

More on the Blue Jays at: Bluebird Banter More on the Rays at: DRays Bay

The White Sox staked out their lead early and Hector Santiago (14% WPA) almost gave it away but was able to hold on for six innings of two-run (one earned) ball. Samuel Deduno (-28% WPA) was torched for five runs and eight hits through five innings. Both offenses end up being silenced after the fifth. Chicago scored five runs but only two batters posted positive additions to their win probability: Alexei Ramirez (29% WPA) and Avisail Garcia (12% WPA).

More on the White Sox at: South Side Sox More on the Twins at: Twinkie Town

The score speaks for itself. The Reds' win expectancy didn't drop below 98% after the fifth inning. Wily Peralta (-30% WPA) was having a nice start to the second half but has fallen off as of late, culminating in yesterday's implosion of seven runs on 12 baserunners in four and a third. The only batter that recorded a negative WPA for Cincinnati was Cesar Izturis, making him the perfect two-hole hitter for Dusty Baker. Homer Bailey (17% WPA) may not have broke a sweat all game (.27 pLI), allowing just three hits and a run with eight strikeouts over eight innings.

More on the Reds at: Red Reporter More on the Brewers at: Brew Crew Ball

Edwin Jackson (-11% WPA) struggled with control, walking four, allowing six hits and three runs (one earned) over six innings and could be considered a hard luck loser thanks to Adam Wainwright's downright dominant performance. Apparently not wanted to be bested by Clayton Kershaw's dominance from Saturday night, Waino (24% WPA) struck out eleven and gave up five hits and a run over seven innings. Jon Jay (19% WPA) stuffed the score sheet with two hits (double + homer) and a walk in five plate appearances. 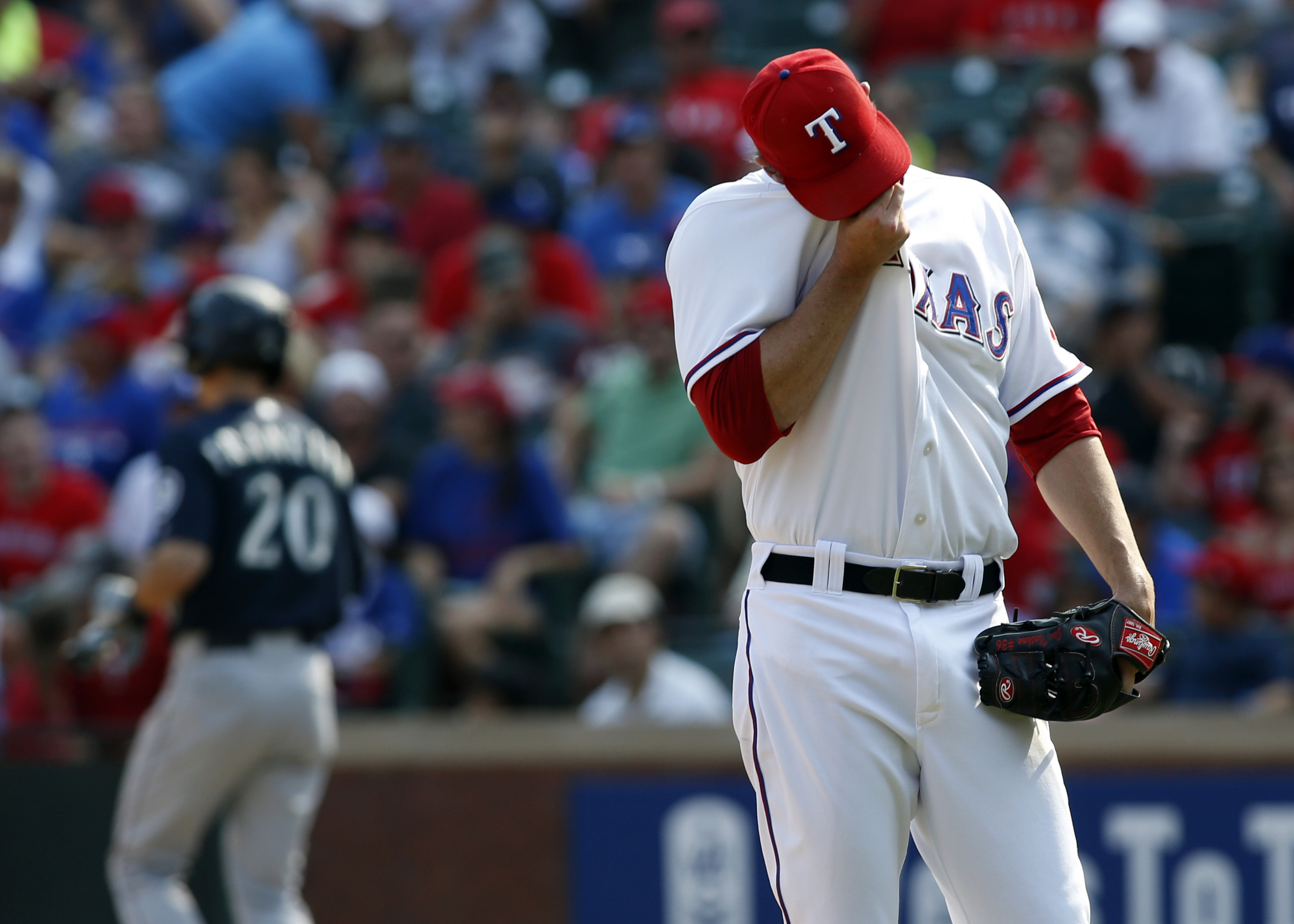 Erasmo Ramirez struggled to strikeout batters but maintained his control whereas Yu Darvish struggled to keep his control while maintaining his elite strikeout rate. Three runs were tagged on Darvish (10% WPA) who walked four and allowed seven hits in just seven and a hit. Ramirez (16% WPA) gave up four hits and two runs (one earned) but just struck out two batters. The game was tied going into the ninth, but for some reason, closers continue to struggle in non-save situations. Joe Nathan (-28% WPA) earned himself a rare Meltdown (2013 30:2 SD/MD ratio before yesterday) by giving up the eventual game winning run on two hits and two walks.

The win expectancy chart illustrates that the Astros ruled the first third of the game, the Angels came back and maintained a 50% chance of winning for the middle only for Houston to come back and win the game. Jason Vargas (-3% WPA) pitched averagely, allowing three runs on ten baserunners in just five and a third but J.C. Gutierrez (-36% WPA) melted down and gave up a three run homer to Matt Dominguez that sealed the game in the seventh. Dominguez actually had himself a game yesterday, contributing four hits in five plate appearances and a whopping 48% WPA.

Looks like Scott Kazmir may still be dealing with a little bit of dead arm. Yesterday, Kazmir (-44% WPA) gave up ten hits, two of which were homers, that led to five earned runs in five innings. Tommy Milone wasn't very efficient and lasted just four and two thirds for a -17% WPA with three runs (one earned) given up. The Oakland bullpen managed to shut down the Indians for the remaining five and a third. There was a short-lived rally in the fifth that chased Milone but otherwise Cleveland struggled to get any kind of advantage in win expectancy.

Matt Harvey, somehow, keeps lowering his FIP. After yesterday's 1.54 FIP in six innings that included two runs and six hits along with six strikeouts, Harvey now sits at an even 2.00. But because he gave back the lead and left with the score tied, he only provided 4% to the Mets' win probability. Eric Stults (-16% WPA) allowed eight baserunners in six and two thirds and gave up three runs. Offense came and went through the game but Will Venable's walkoff homer (38% WPA) that led the ninth against Pedro Feliciano was able to keep this game from becoming an extra innings affair.

More on the Mets at: Amazin' Avenue More on the Padres at: Gaslamp ball

Ryan Dempster, inexplicably, wasn't ejected after (clearly) purposely beaning Alex Rodriguez in his first at bat. Joe Giradi quickly realized the pitcher's intentions and stood up for his controversial third basemen but to no avail, eventually being thrown out of the game. It was all downhill for Dempster after that. A-Rod scored after the HBP and six more runs crossed home and were attached to Dempster after nine hits and a walk in just five and a third (-23% WPA). CC Sabathia (-35% WPA) wasn't much better, having allowed six runs on five walks and seven hits while recording just six strikeouts but was somehow credited with a win (Kill the win).

More on the Yankees at: Pinstriped Bible More on the Red Sox at: Over The Monster