Adjusting to Life in the Pen

Phil Hughes has said that he's willing to sign as a reliever next year. How have starters converted to relievers done over the past 40 years?

Share All sharing options for: Adjusting to Life in the Pen

When I first came up, the bullpen was pretty much where they put the guys who couldn't start.

Dennis Eckerlsey, a Hall of Fame starter/reliever, said the above quote, which summed up the state of the bullpen for baseball's first 90 or so years. However, that has seemed to change recently, as pitchers can make careers as relief aces. Despite this, that doesn't mean that starters can get shipped to the bullpen. Phil Hughes is one example of one who has bounced from rotation to bullpen and back to the rotation.

Now, some may argue that Hughes should move to reliever. After all, what many would consider his best season came in 2009, when he only made 7 starts in 51 appearances (He put up a line of 3.03 ERA, 3.23 FIP, 10.05 K/9, 3.43 K/BB, and 0.84 HR/9). Others would argue that Hughes would do well to be away from Yankee Stadium; a classic change of scenery*. But really, whether or not Hughes decides to become a reliever brings up an interesting question: In general, how do starters do when they transition to relievers the following year?

To answer this question, we look at the starters (Defined as pitchers who had at least 50% of their appearances as starts) with at least 100 IP who became relievers the following year (Had at least 50% of their innings in relief the following year) since 1974. There could be several other criterion levels to define a starter and reliever. This resulted in 223 pitchers, roughly 6 per season, and 446 seasons to compare. As a side note, defining a reliever as any pitcher with more than half of his appearances in relief would result in 418 pitchers.

Well, let's start with K/9. First of all, for the 223 pitchers, the K/9 as a starter and the K/9 as a reliever have a correlation of 0.6414. Looking at plot of starter K/9 and reliever K/9, there's a clear linear relationship. So, we can justify running a regression on these values. Roughly speaking, the pitcher has an increase of one extra strikeout per nine innings after the move to relief. Also, from the data, there seems to be a roughly 70% chance that the pitcher increases their K/9 total. 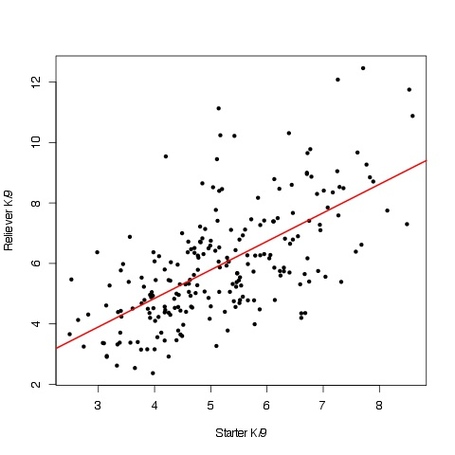 The relationship for BB/9 isn't as definite, although it still has a strong-ish relationship. The starter and reliever BB/9 has a correlation of 0.5125, again with a linear relationship. The prediction isn't as nicely clear as with K/9, as the slope coefficient in the regression is 0.66, which unfortunately is far from 1. However, we can still get a reasonable prediction. Roughly speaking, the following BB/9 values as a starter will yield these BB/9 values as a reliever.

Across all the data, the pitchers saw an average increase in BB/9 of 0.31 BB/9. So along with K/9, BB/9 generally goes up, unless the pitcher already has a terrible BB/9 rate, resulting in a slide down to a more normal value.

What does this mean for K/BB? Actually, roughly speaking and on the average, a pitcher's K/BB stays the same after the switch to relief, with a correlation of 0.4982. 114 of the 223 pitchers experienced an increase in K/BB, or 51.1%. However, it is worth it to note that extreme increases in K/BB is more likely towards the positive end. That is, a pitcher is more likely to see a large uptick in K/BB than a large downturn.

In addition, it's worthwhile to note that K% and BB% can also be analyzed instead of K/9 and BB/9. A cursory examination shows that these statistics yield similar values and results.

The results of this section would probably be of great interest for Hughes Fans, Now, I will admit that home park can have a definite influence on this statistic, so I limited this only to players who stayed on the same team and retained the same home park in both years. Frankly, even with the new park pitchers taken out of the equation, the relationship between starter HR/9 and reliever HR/9 is described, at best, as weak. Correlation is around 0.25 and the split of increased HR/9 vs. decreased is 57%-43%. There's not even a clear ``regression to the mean" phenomenon.

Now to the statistics that most people run off to: ERA and FIP. Or at least variations of these. In order to take out the year-to-year variation of different run scoring levels, ERA- and FIP- were used.

I will start by saying that there is no relationship when looking at ERA- between the two years, or at best miniscule. Correlation is 0.05, residual standard errors are huge, plots look horrible, so let's move on. I will say that there is definite ``regression to the mean" potential in the ERA- after the move to the bullpen.

FIP- has a slightly stronger relationship, although it's still pretty weak. Correlation comes in at 0.3124. Here, there is a clear ``regression to the mean" relationship occurring. For every percentage points different from 100 in FIP-, the following year the pitcher can be expected to (on average) have a half that amount in difference from FIP- in the same direction. To put this in numbers, if a pitcher puts up a FIP- of 110 as a starter, his average expected FIP- the following year would be 105. For a FIP- of 90, the following years would be expected to be around 95.

However, again, this is a very weak relationship. The residual standard error is 19.75, leading to a wide range of plausible FIP- values the following year. So these values aren't exactly the most precise. The moral here is that you can have a decent idea with walks and strikeouts, but home runs and FIP- and ERA- are a bit murkier.

Best and Worst of Converted Relievers

For this last bit, we'll take a brief look at the best and worst cases where players were switched to relief, followed by looking for a comparison Phil Hughes. For the worst cases, we have Shawn Chacon. His 2003 season was reasonably impressive, leading to an All-Star selection. The following year, he was (For some reason) made the closer for the Rockies, and while he had 35 saves, just about everything else went downhill.

On to a better example, possibly the best case scenario. In 2001, Eric Gagne put up decent enough numbers as a lower-order starter for the Dodgers. The following year, he was switched to closer and set the world on fire. Now, the reasons may be a little sketchy, but regardless, the results were incredible.

Finally, I want to present a list of pitchers who were of a decided rarity; pitchers who excelled in both their season prior to and after their change to relief, or were at least decent starters and exceptional relievers. First off, Ron Reed, who was second among MLB pitchers in WAR in 1975. Why he was removed from the rotation the following year is beyond me.

A Comparison For Phil Hughes

After his 2002 season, Marquis was sent to the bullpen, and was a little disappointed about that. So he wound out splitting his year between the Braves bullpen and the Richmond Braves rotation (Where, if my scorebook is correct, I saw him for a start). So what did Marquis do in his two seasons?

Now this second year probably isn't a fair projection. Hughes seems willing to move to the bullpen, and I don't see a trip to AAA in Hughes's future. However, the general form of Marquis's statistics may serve as a guide. Hughes the reliever could put up 8.5 K/9, 3.0 BB/9, a much lower HR/9 (Assuming he gets out of Yankee Stadium), 110 ERA-, 108 FIP-. Of course, it could be decidedly different. Of course, maybe the best comparison for Hughes is Hughes himself, as he's been through this switch to the bullpen before.