It's extremely rare for a pitcher to win an MVP award as there has only been one in the past 25 years. Without a true standout in the National League, can Clayton Kershaw bring home the award this season?

Share All sharing options for: Is Clayton Kershaw a legitimate MVP candidate?

Clayton Kershaw is having an excellent season, to say the least. He's hurled three complete games, two shutouts, struck out 25% of the batters he's faced while walking a career low 5.6% and only allowing 5.87 H/9. With the highest swinging strike rate of his career (11.3%) (4th in the NL), Kershaw is limiting the opposition to a .224 wOBA. With a 1.88 ERA/2.43 FIP/2.93 xFIP, Fangraphs has him as the second best pitcher (5.0 fWAR) in the NL behind Matt Harvey (5.7 fWAR). But both RA9-wins (6.7) and Baseball Reference (6.1) have him as the clear best starter. Simply put, Kershaw is everything you want in a starting pitcher: durable and downright dominant. It can be argued that he has been the most valuable player in the National League. But does he have a legitimate shot?

The NL MVP has had consistent characteristics for the past 20 years. Since 1993, only one MVP has batted under .300 and only two have gotten on base at under a .395 clip and slugged less than .540. If you were looking for the average triple slash line of the past 20 MVPs, it would be .335/.449/.661. At the minimum, they were within the top six players in batting average, top six in on-base percentage and top four in slugging. If you remove Jimmy Rollins (20th in batting, 47th in OBP, 15th in slugging in 2007), MVPs were all within the top five in batting average and top three in on base and slugging percentage. The average wOBA is .455 and only two of the past 20 MVPs have posted a wOBA under .400 (Jimmy Rollins in 2007, Barry Larkin in 1995). Since 1995 when the division series was added to the playoff structure, thirteen of the eighteen MVPs played on teams that made it to the postseason. Guess what those five MVPs on non-playoff teams had in common? They were all power hitters that finished the season in either first or second in NL slugging percentage!

So to summarize, if someone's going to seriously compete for the NL MVP, they're likely going to be batting over .310, getting on base at a .420 clip or better and slugging at least .550. We should be looking for batters with a .400 wOBA or better and more likely than not, they're going to be playing for a playoff contender or putting up some excellent power numbers. 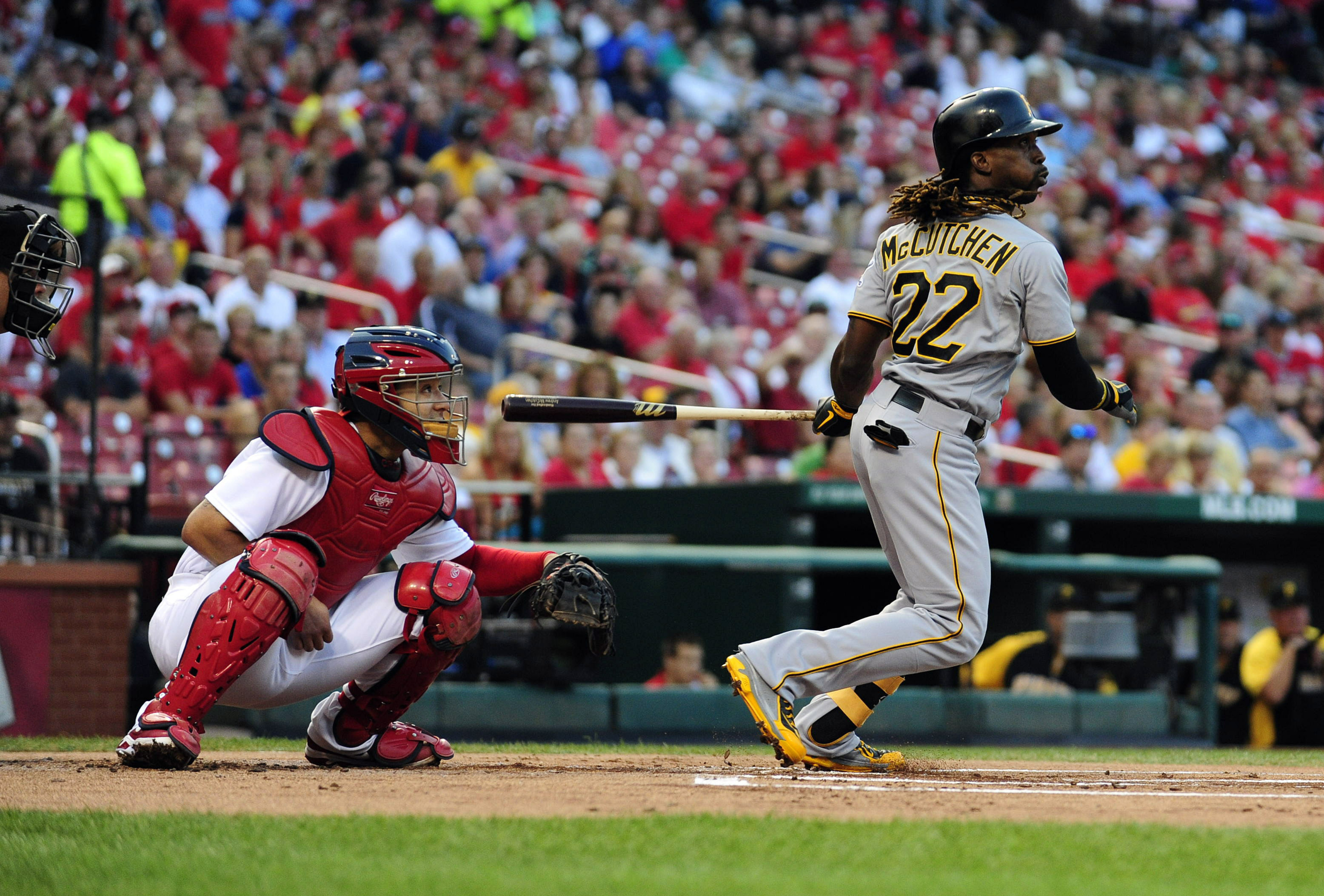 Now, let's look at Kershaw's primary competition for the MVP award. Andrew McCutchen has led the dynamic Pittsburgh Pirates to a basically guaranteed playoff spot. With an excellent, NL leading 5.8 fWAR/6.3 rWAR, McCutchen is widely considered a prime candidate as the NL's best offensive player. Slashing .312/.386/.507, he has the average but will likely need to get on base more often and hit for a little bit more power to generate more MVP votes. But McCutchen is the complete package; he contributes with his bat, glove and baserunning. Also, he was able to smack 31 homers and post a .403 wOBA last year so perhaps Cutch could have an outburst to finish the year strong and make a strong case for the NL MVP.

There are only four batters who have identical or a higher wRC+ than McCutchen's 149. Are Joey Votto, David Wright, Paul Goldschmidt and Carlos Gonzalez competitors for the MVP too?

Votto has always been incredible but his power has decreased and instead, he's taking more walks. He certainly fits the mold of the past 20 MVPs in the NL as he is currently slashing .320/.434/.511 with a .406 wOBA. Granted, he's focused on not making outs, which his ability to should be recognized for being absolutely exceptional, but I don't think that will win him enough votes to win the MVP award. While his pedestrian RBI numbers shouldn't really matter as it is more of an evaluation of the players that get on base in front of him, one would expect more than a handful of voters to notice his unimpressive total and vote for someone else. The Reds are practically a shoo-in for the playoffs so that may actually help his case.

Wright could have certainly made a case considering he has a .390 wOBA with a .309/.391/.512 slash line, but recently went down with a Grade 3 strain of his right hamstring and may miss the reason of the season. As impressive as his 2013 has been, I don't think someone will win the MVP with 105 games played.

Goldschmidt may have the strongest case among this group. With a .400 wOBA, he has also provided the most WPA (5.33) and the highest RE24 (42.49). Not only that, his traditional statistics are great across the board: 77 runs, 29 homers, 93 RBIs, 13 SB and a .295/.391/.549 line. He has power, he takes walks, he's racking up RBIs and he's even showcasing some speed on the base paths. Old school and sabermetrically inclined voters both have plenty to drool over. The Diamondbacks are a long shot to be playing meaningful baseball in October but as long as Goldschmidt continues to rake, he will remain in the top two in slugging percentage. 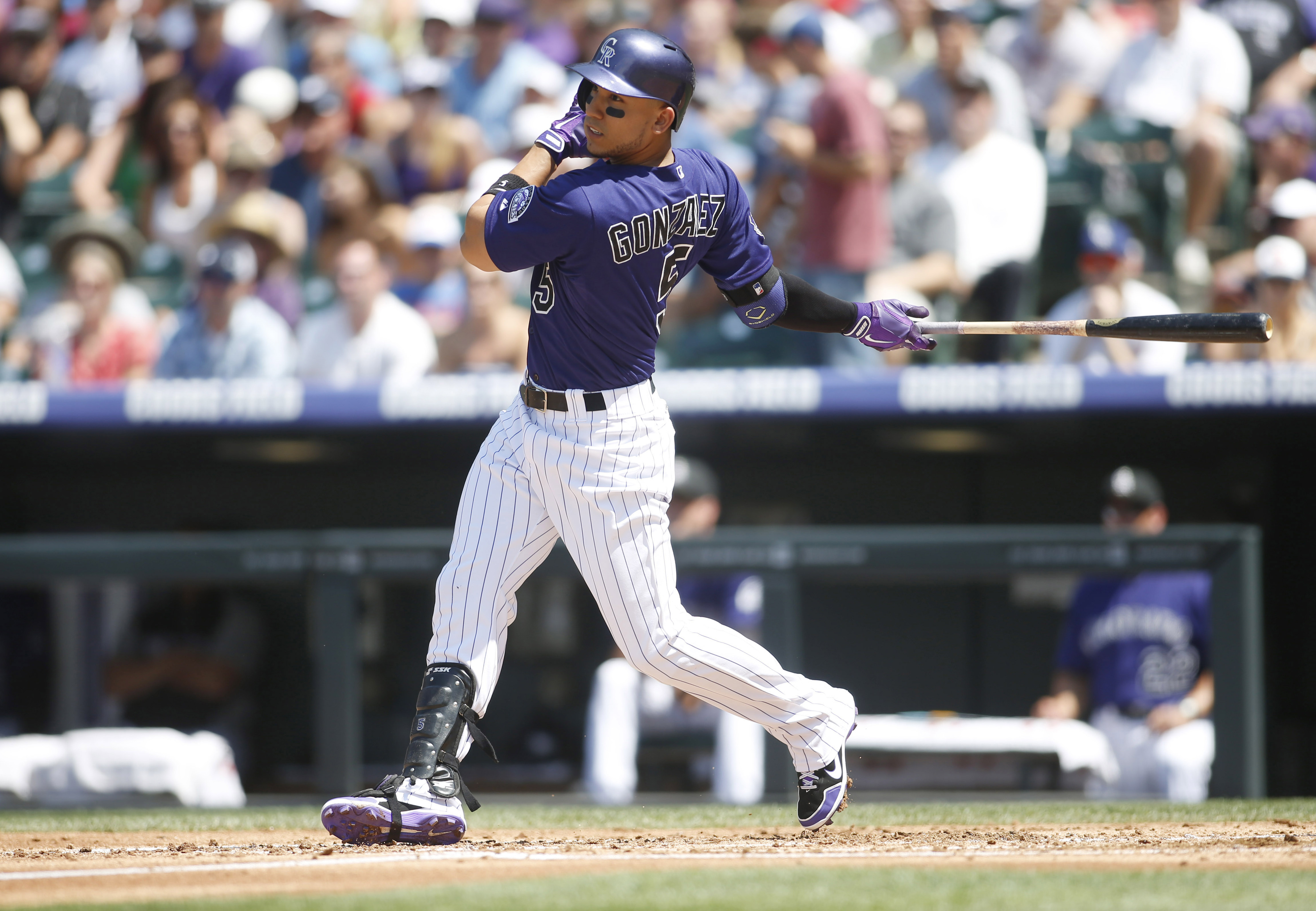 Carlos Gonzalez is probably the most interesting case of the four. Right now, he's on the disabled list with a sprained finger and no timetable to return but he was pretty amazing for 103 games. Despite being out of action since August 4th, CarGo leads the NL in wOBA at .407 and slugging at .591. Averaging .302 and getting on base at a .367, he leaves a little bit to be desired in those departments, which would help if he wouldn't strike out so much. Despite those weaknesses, he has power (26 homers) and speed (21 SBs) and provides good defense in left field. He's McCutchen with some more power but walks a little bit less and strikes out much more. As with Wright, CarGo needs to get back on the field and continue to produce if he stands a chance at beating out his competition for the MVP. There is a chance for him to come back at the end of August and go on a complete tear in September and boost his power numbers even more as the Rockies play 13 of their last 25 games at home.

And then there's Yadier Molina. Many people were expecting him to be the leading MVP contender until he started battling injuries with his right knee, leading to a stint on the disabled list from July 31st until earlier this week. With only 99 games played, Molina (.325) is in second for the batting title behind Chris Johnson (.337). He doesn't really strike out, nor walk, so his .370 OBP leaves something to be desired and his .473 slugging percentage is good for 21st in the league, behind Jonathan Lucroy, Brandon Belt and Freddie Freeman. He's also 17th in wOBA with .365. An argument probably could have been made for Molina had he not gotten hurt as he's arguably the best defensive catcher in the entire MLB and has handled on of the best pitching staffs, but he simply doesn't have the production that former MVP Buster Posey had from the catcher position in 2012.

These are just a handful of players that could really give Kershaw a run for his money. None of them are perfect or practically guaranteed to gather the most first place votes, leaving the Los Angeles starter a chance to contend for the MVP award. It's rare that pitchers win the MVP award but Justin Verlander did it in 2011. Verlander won with 13 first place votes, a 71% share of the max points available. With 251 innings pitched and a 2.40 ERA/2.99 FIP/3.12 xFIP, he held the opposition to a .247 wOBA. He struck out 25.8% of the batters he faced while walking only 5.9% and generating 10.2% of his strikes on swings, leading to a miniscule 6.24 H/9. But Fangraphs had Jacoby Ellsbury as the best player in the American League with a 9.1 fWAR and Verlander a distant fourth with 6.9 fWAR although he did have a tremendous 9.2 RA9-WAR. Meanwhile, Baseball Reference had Ben Zobrist with the most Wins Above Replacement at 8.8 and Verlander a close second with 8.4. There were viable candidates to win the MVP award but Verlander won by a considerable difference.

In 2013, there hasn't been an offensive performance similar to Jacoby Ellsbury's or Jose Bautista's 2011. Yet Verlander won despite Ellsbury's .400 wOBA and Bautista's 43 dingers, .608 slugging percentage and .443 wOBA. Kershaw has been better in many areas than Verlander in 2011. He has a lower walk rate, H/9, ERA, FIP, xFIP and opposing wOBA. Kershaw trails in strikeout percentage by almost 1% and RA9-WAR but he still has about eight more starts left in the regular season. Unless he throws a couple more complete games, it's likely that Kershaw won't top Verlander's innings pitched in 2011 either. 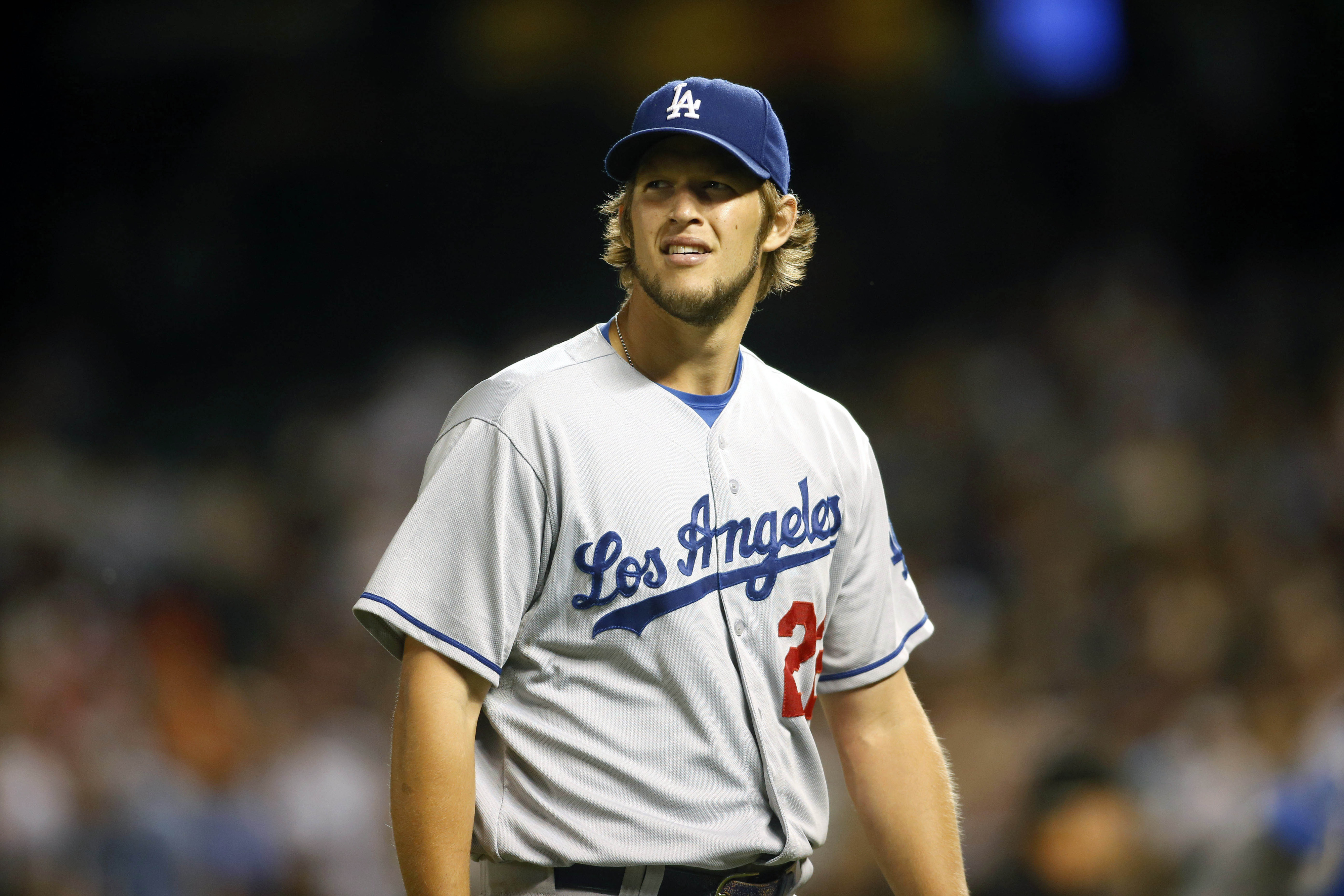 But there's one traditional statistic that Kershaw most definitely will not top from Verlander's MVP 2011 season: wins. With only 11 wins in 25 starts, he has had four tough losses (losses in quality starts), three wins lost (faced their final batter in the position to win, but the bullpen blew the game) and a 84% quality start rate and an average game score of 67.8. Verlander had 24 wins in 34 games started with three cheap wins (wins in non-quality starts), four tough losses and zero wins lost and an 82% quality start rate with a 65.9 average game score. Whereas Verlander had a little bit of luck on his side with his 24 wins, Kershaw could have potentially been 19-3 if things broke in his favor.

Win-loss record aside, it can be argued that Kershaw has a better case to win the MVP than Verlander did in 2011. He has performed better in most underlying peripherals and has the opportunity to widen the gap while catching up in innings pitched and RA9-wins. Without a tremendously incredible offensive season that voters can unanimously rally behind, Kershaw has a legitimate chance at winning the MVP award this year.