With Mike Trout still four years from free agency, the Angels have a unique opportunity to lock up their superstar outfielder for the long haul. Given his performance thus far, just what might that extension look like?

Share All sharing options for: Mike Trout and the inevitable contract negotiation

Mike Trout is pretty good, isn't he? As a 20-year old rookie last year, Trout managed to swipe 49 bases, lead the big leagues in wRC+, and make a number of highlight reel grabs, and the scary thing is that he's actually shown improvements in his sophomore campaign. The only thing he hasn't done yet is win an MVP award, but that very well could change in a few months.

This article isn't about how wonderful Mike Trout is; however, because, well frankly I bet you're a little tired of articles that simply sing his praises. Instead, I want to look at the question hanging over the head of Angels' GM Jerry Dipoto: What will it take to sign Trout to an extension?

The legacy of Eddie Bane 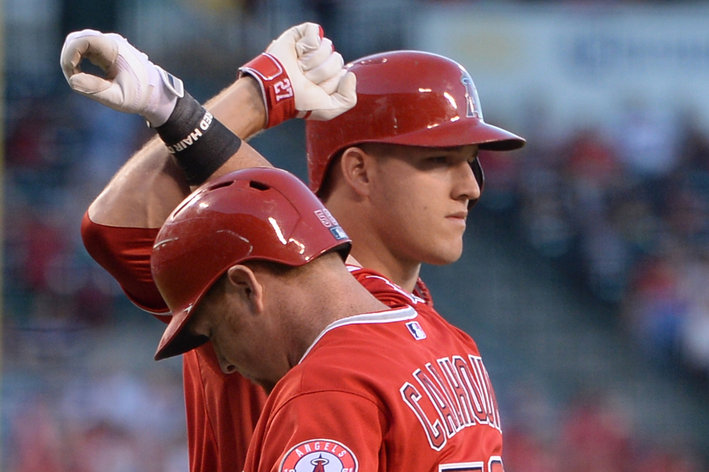 Examining the man who drafted Mike Trout's contributions to the 2013 Angels.

By no means am I the first writer that has attempted to outline an extension for the supremely-talented outfielder. Both Yahoo's Jeff Passan and former Baseball Prospectus writer Kevin Goldstein polled league executives to get their thoughts on a Trout deal, and former BtBS contributor Glen DuPaul tackled the subject on two separate occasions, first estimating what a 20-year contract for him would look like prior to his amazing 2012 season, and then again over the past offseason. So why bother when so many smart people have already weighed in on the topic? Two reasons:

Unlike the previous writers, though, I'm not going to present my opinion in such a straight forward manner. Instead, I'm going to simulate a negotiation between Jerry DiPoto and Craig Landis, with the caveat that I do not know either of these men, nor do I truly know what they would say in a conversation about Trout. Taking that into consideration, let's get to the negotiation.

Mr. Landis, Jerry DiPoto is on the phone for you...

CL: Jerry, to what do I owe the pleasure of your call today? I'm guessing you'll have an interest in Paul Konerko with your hole at first base, but we'll have plenty of time to talk about that in the offseason.

CL: I'll say I'm at least curious to hear your thoughts; what do you have in mind?

JD: Well, I know you think I'm going to point to Evan Longoria's extension as the model for what we want to do, but that just doesn't make sense for what Mike has accomplished thus far. Instead, our offer is a 6-year, $50.65 million deal with club options of $18 million for 2020 and 2021. Considering inflation, that contract is very similar to the deal Dustin Pedroia signed with Boston in 2008, as an up-the-middle talent coming off of consecutives season in which he won Rookie of the Year and MVP in the American League. With the options it can be an 8-year, $86.65 million deal, and he'll still hit free agency at 30.

CL: Jerry, with all due respect, I wouldn't even entertain that offer. Pedroia may have won Rookie of the Year and MVP in his first full two seasons, but he did so at 23 and 24 as opposed to 20 and 21, and Mike was worth nearly as mean wins (10.0 fWAR) in 2012 as Pedroia was over those two seasons combined (10.1 fWAR). For the same reasons we can ignore Ryan Braun and Troy Tulowitzki's early extensions. If we want to focus on past precedent, only three contracts really make any sense and they are Matt Kemp's 2011 contract (8-years, $160 million), Buster Posey's 2013 deal (9-years, $136 million) and Alex Rodriguez's deal from 2000 (10-years, $250 million).

CL: I couldn't be any more serious, and if anything, that might only be a starting point. Compare the numbers:

In the history of the game, there have only been 49 individual seasons of 10 or more fWAR. Those 49 seasons came from just 20 different players. And of all the great players that have played this game, only the following list has ever posted back-to-back 10+ fWAR campaigns: Ty Cobb, Babe Ruth, Rogers Hornsby, Ted Williams, Mickey Mantle, Willie Mays, and Barry Bonds. Barring something unforeseen down the stretch, Trout will join that list before he turns 22-years-old.

By season's end, he likely will have two top-5 finishes in the MVP voting and a Rookie of the Year award, giving him plenty to talk about in potential arbitration hearings. Considering that Ryan Howard won $10 million and Tim Lincecum asked for more than $21 million in arbitration, a conservative estimate (2015-2017) for Mike's arb years makes his remaining contract a 4-year, $55 million contract with him hitting free agency at 26-years-old. That's the baseline we're working with here.

JD: You know as well as I do that deal would be seventh largest contract in baseball history. No argument whatsoever that Mike is a special talent, but what you're asking for is three times the largest pre-arbitration deal in history. We've already got two big contracts on the books and our average attendance is down nearly 500 fans a night from last year...

CL: (Interrupting) Don't try to pull that with me. The contracts for Pujols and Hamilton should have no bearing on what happens to Mike and ticket revenue doesn't drive player payroll.

JD: I don't necessarily disagree with you, but those things do matter to Art Moreno and he signs the checks. Regardless, Mike is still more than four years from free agency. And while he has been tremendous thus far, we're more concerned with how he will perform in the future. He's already taken steps back defensively and on the bases, judged by any measure you'd like:

And who's to say he hasn't peaked offensively? Justin Upton posted a .385 wOBA as a 21-year-old and four seasons later he still hasn't topped it.

JD: It's just an example. You want us to pay him as if he'll get better every year, and we're skeptical that it happens. Plus, we haven't even brought up the chances that Mike gets hurt, which seem to be increasing each season. With your offer, there's no discount at all for the security we're giving him over such an occurrence.

CL: Maybe you should have thought about that when you only offered him half a million for 2013.

Ignoring that, however, let me take a step back to really get at your point here Jerry. First of all, defensive metrics are somewhat unreliable and most experts want three years of data to really draw any conclusions. As for the stolen bases, yes, he has and will continue to slow down as he gets older, but that's a very small part of his value and he still will be among the fastest players in the big leagues.

The largest part of his value will come from his offensive/defensive production over the life of an extension. and If you caught Jonah Keri's recent piece on Mike's historic season, you'll see that ZiPS creator Dan Szymborski projects that Mike to be worth 71.5 wins above replacement over the next ten years, another conservative estimate because of the built in regression in the ZiPS system. While some have estimated the cost of a single win as high as $9 million in free agency; our standard $4.92 million figure makes him worth more than $350 million over the next ten years. I'd say you're getting quite a bargain if you give us what we've asked for.

You have a chance to have Mike patrol centerfield for the better part of the next decade, unless of course you'd rather overspend for Desmond Jennings or Austin Jackson in 2016, or hope that your farm system produces something capable of taking his place by 2017. Because you know if you don't pay him, someone certainly will. 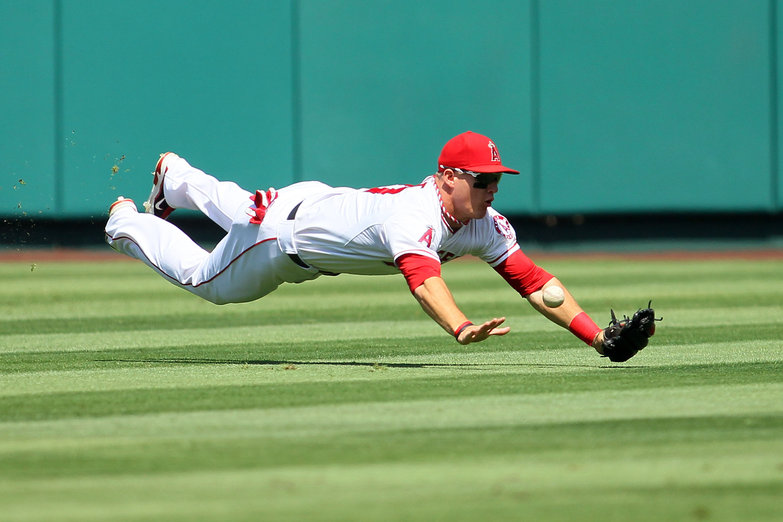 JD: I didn't call you today because I want Mike to play somewhere else. We want him here, and we're prepared to do what have to to get a deal done. Obviously our initial offers are miles apart in terms of AAV, but I'd be willing to get closer to your figure if we can add some length to the deal, and keep the club options I proposed.

In total the deal could be worth $204 million over ten years and even if we exercise both options, he still would have the chance to hit the market as a 32-year old and have one more pay day. Not that he would need it though, considering this deal would give him all the security he'll ever need. It's a big investment, but there's now player we'd rather make this kind of commitment to. What do you say?

CL: I'd say we have a deal. A deal that will almost assuredly make someone look foolish four years from now, but only time will tell which one of us that shall be.

For more on Trout and the rest of the Angels, be sure to check out Halos Heaven.

Thanks to Ken Woolum for research help on this article. You can follow Ken on twitter @Wooly9109.