Matt Dominguez and a line in the sand

Matt Dominguez is a great defensive player, but really struggles to get on base. How much should we value each side of the fielding / offense balance?

Share All sharing options for: Matt Dominguez and a line in the sand

I guess I should start this article with this: the worst hitters who play in the major leagues are pretty damn good at hitting. Any one of them would not only make (nearly) anyone reading this look like a doofus if we tried to sneak a 58 mile-per-hour "fast"ball past them, but they'd probably also do a number on that guy who plays American Legion ball, or the guy who played at a D1 college, or the best high school pitcher you've ever seen. So terms like "bad" and "worst" and "awful" are completely relative ... I've got the most respect in the world for these world-class athletes. These guys are the best.

Matt Dominguez, the third baseman for the Astros, is a pretty terrible hitter, if you ask me. Dominguez is still young, so things could change, but he posted some pretty interesting numbers in the minor leagues. And they are interesting because they weren't very good. In 2011, Dominguez's first season in Triple-A, he posted a 79 wRC+, which effectively tells us that he was about 21% worse than league average for his level of the minors. He got some time in the bigs, hit a little worse than that, and went back to Triple-A in 2012. The next season, he started the year even worse, posting a 64 wRC+ (that's 36% worse than league-average now) in Triple-A for the Marlins before moving over to Houston's Triple-A affiliate in a trade. There, Dominguez saw his batting average on balls in play shoot up, propelling him to a 94 wRC+ in 45 games. That's better, but hardly what you'd like to see from a big-league third baseman.

In his time in the bigs that season, however, he succeeded in a very small sample, amping up his power to levels we'd not seen since he succeded in Single-A in 2008, cracking five bombs in 31 games and posting above-average offensive production. It was a bit of a fluke, though, and this season, he's spent the whole year in the majors ... posting a 71 wRC+ (about 29% worse than a league-average hitter) while playing the hot corner for Houston.

He's a hitter who flashes some power, and seems to get good plate coverage, but historically musters a low batting average on balls in play and won't take a walk to save his life. Those two things combine to give him a .258 OBP on the season, good for second-worst in baseball among qualified hitters. It's a bad scene. 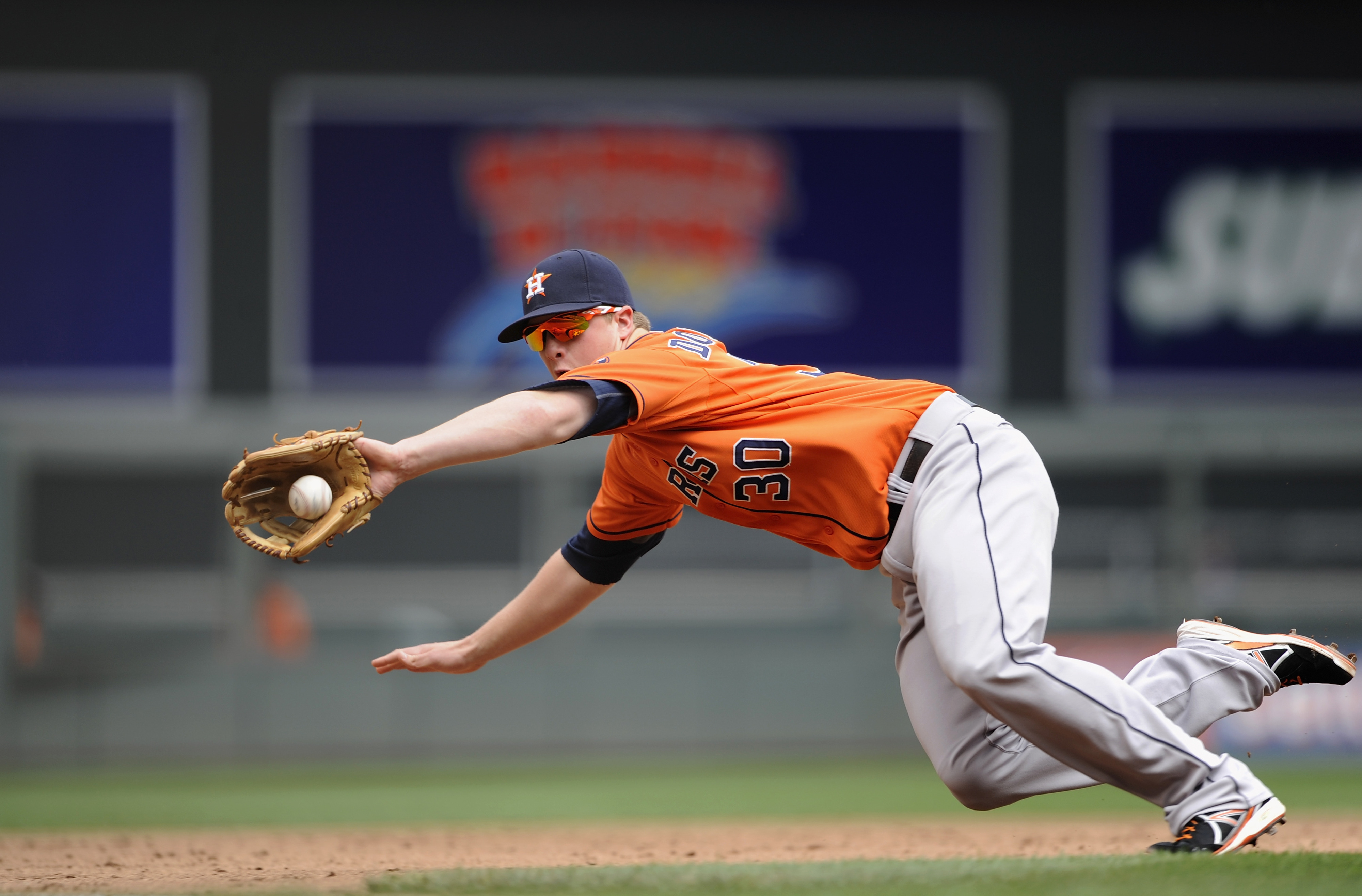 So why does Matt Dominguez have a basically-uncontested job as Astros third baseman? I'd imagine there are two reasons. Number one is that he plays for the Astros, and their team doesn't have any other, better options. But number two is because Matt Dominguez has a reputation as an astonishing defensive player. He was projected to be a Gold Glove-caliber defender from day one, when he was drafted 12th overall in the 2007 draft.

It's hard to judge defense, especially in a small sample size at the big-league level, but we have a lot of scouting reports that say that Dominguez is pretty great. Despite UZR numbers from 2013 that might say something a little different (-3.5 UZR), his DRS (seven runs) and FRAA (9.6 runs) confirm the scouting reports. And while Dominguez has 11 errors on the season, his range allows him to get to more balls. Most of those errors have been throwing errors.

So, more or less, what the Astros have on their hands -- at least for now, and likely in the future -- is your prototypical good-glove, no-hit infielder. Except, instead of playing the premium position of shortstop, Dominguez resides at third base -- a position usually counted on for a bit more offensive oomph. This season, all AL players who've played third base have combined for a 97 wRC+ (though Miguel Cabrera probably skews that number a bit high).

My question, and it's not one to be answered easily, is where would we want to draw the line in the case of good-defense, bad-offense players? Wins above replacement are a good heuristic, especially over time, but the way defensive stats are, uh, fuzzy or unreliable (especially over small samples), I think that we're forced to consider other ways to establish the value of defense as compared to offense.

If you have a player who's, let's say, the best in baseball at defense at his position (for the record, with Manny Machado and Evan Longoria in the league, I'm not sure Dominguez is), what level of offensive performance would you consider acceptable to keep him in the lineup every day? Would he need to get on base at least at a .300 clip? Hit 20 homers a season?

Matt Dominguez is actually, in the grand scheme of things, a pretty good hitter. He's without much argument, one of the seventy-five best third basemen on this planet right now, all things included -- and I'd be ecstatic to be one of the seventy-five best people on the planet at anything*. But if he doesn't dramatically change how effective of a hitter he is, how much tolerance should the Astros have for him at the hot corner?

[ * - Other than describing Superdrag's discography and eating Junior Mints. I'm probably top-50 in both.]

All statistics courtesy of FanGraphs, Baseball-Reference, and Baseball Prospectus.