Do pitchers get more efficient with experience?

Young pitchers have innings limits, but this might punish the hyper-efficient youngsters. But is there such a thing?

Share All sharing options for: Do pitchers get more efficient with experience?

Young pitchers are sometimes handcuffed by strict pitch and innings limits early in their career. Stephen Strasburg being shut down during the stretch run last year is the most obvious example, but it’s not difficult to think of examples of pitchers on innings limits.

(The Verducci Effect is a rule of thumb that says young pitchers are at higher risk for injury if they jump more than 30 innings year-over-year. It has been disproven.)

But some teams still manage this way and young pitchers are thus faced with innings limits. They’re also less likely to rack up large pitch counts -- of the 443 instances this year where a pitcher has thrown more than 110 pitches, just 63 have come from pitchers who were younger than 25 on that date.

Those two items in concert, pitch limits and innings limits, provoked some curiosity. Basically, if a young pitcher has an innings limit, even pitching efficiently won’t net him more innings by the end of the year. And if a young pitcher has a pitch limit, pitching inefficiently can actually help him get more starts by way of spreading his innings out over more games, assuming the pitcher can be successful while inefficient.

In economic terms, a arbitration-controlled player would actually have financial incentive to be inefficient on a game-by-game basis because his innings limit would be reached more slowly, thus helping him accrue more service time. That’s probably not an economic decision that exists in reality, it’s just an issue within the system worth pointing out.

Injury experts could speak better to this, but it seems as if counting a pitcher’s total pitches for a year (in starts, bullpens, warm-ups, and so on) might be a better indicator of pitcher workload than just innings pitched.

Should Matt Harvey be shut down when he hits 200 innings because he only threw 169.3 last season? The answer to that question depends entirely on how efficiently he’s racked up his 159.7 innings so far this year.

The table below shows this year’s leaders (minimum 40 innings pitched) in terms of "pitches per out," a rough way of looking at how hard a pitcher has to work to complete each inning.

It’s interesting to see a handful of relievers in first table – while relievers do work shorter periods and thus have some advantages, it’s surprising that the efficient ones don’t rack up more innings as a result.

It’s also readily obvious that trimming walk rate is the best way to be efficient, as almost nobody on these leaderboards has a double-digit walk rate.

And of course, there aren’t many youngsters on here, though perhaps there are more than expected. It seems the under-25 group is less efficient. The table below shows the leaders under the age of 25.

Given the differences between the "all" and "under-25" tables, it’s pretty certain that efficiency doesn’t peak early. This makes sense, but the question still remains as to whether efficiency improves with age or is an inherent trait. The graph below shows the average pitches per out for all pitchers since 2000 with at least 40 innings pitched in a season, grouped by age. (This isn’t exactly an aging curve since there will be some survivor bias, but it provides an estimate of efficiency and age.) 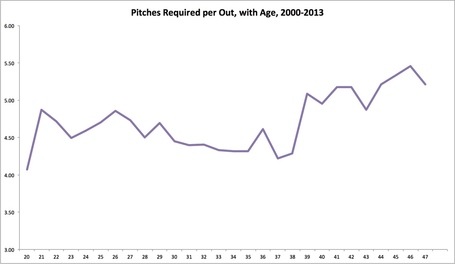 Note: Y-axis does not start at zero.

There’s really not much of a pattern here. It’s clear that pitchers who last beyond age 40 tend to do so in an inefficient manner. If the graph is limited to more standard ages (age 21 to age 40, all of which have at least 10,000 outs in the sample) the trend for "normal" pitchers is a bit more clear, although still murky. 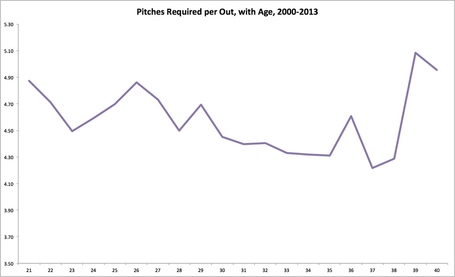 Note: Y-axis does not start at zero.

Now it appears pitchers tend to be most efficient in their early-to-mid 30s. For whatever reason, age 23 also seems to be the most efficient of the "youth years," though it’s unclear why that particular age may lend itself to efficiency.

And just to be thorough, if the graph is limited to just 2013 data, it becomes clear once again that age seems to have little impact on pitch efficiency. 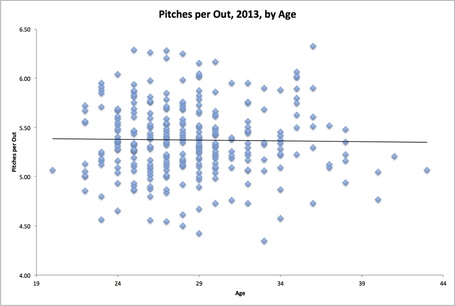 Reflections
I was pretty disappointed to run this study over two hours on a Saturday morning and get inconclusive results. It was my thought coming in that young pitchers were likely to be less efficient, since efficiency seems like a "learnable" trait. I’m curious as to why that may not be the case and would love to hear some theories (or links to prior work) as to why pitch efficiency doesn’t improve with age. Perhaps the fact that only elite pitchers start their careers early to begin with, or "pitches per out" causes both efficiency and skill to be shown, since getting outs is a skill.

All statistics courtesy of FanGraphs unless otherwise cited.