Yu Darvish just keeps topping himself in 2013. This time striking out 15 Astros while flirting with a no-hitter up until the eighth inning. Meanwhile, Mat Latos, Hiroki Kuroda, Cole Hamels, Andrew Albers and Chris Sale were also able to pitch eight or more innings of dominant ball.

Yesterday featured some dazzling pitching performances from Yu Darvish, Mat Latos, Hiroki Kuroda, Cole Hamels, Andrew Albers and Chris Sale in which they carried their teams to victory. Meanwhile, the Orioles and Diamondbacks were playing hot potato with win expectancy for the final three innings of their matchup. And the Rockies barraged the Padres in Colorado. All being said, there were eleven games on Monday, most of which featured some amazing performances! 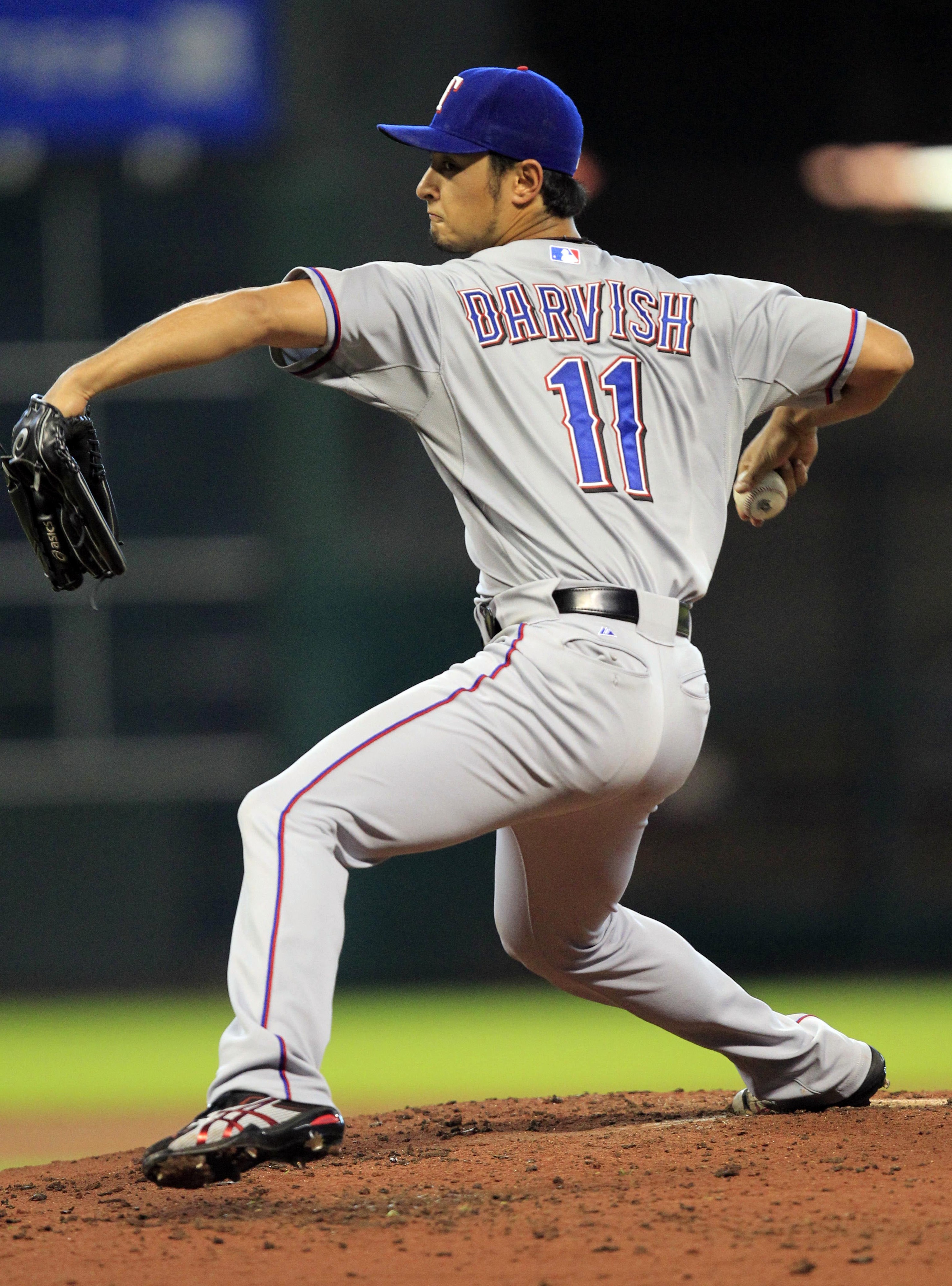 Yu Darvish was pitching against the Astros yesterday so we were predictably treated to a dominant, high strikeout performance. Only allowing one hit, a homer off the bat of Carlos Corporan, and one walk, Darvish struck out a career-high 15 batters in eight innings (42% WPA). The Rangers were able to get two runs early in the first, which proved to be the only offense they could muster. Brett Oberholtzer was a hard luck loser, throwing six and two-thirds while striking out six and allowing two runs on nine baserunners. Joe Nathan took over for Darvish and entered a high leverage situation (2.52 pLI) but locked in a Shutdown to preserve the win for Texas. The score suggests the game was rather close but Darvish was practically untouchable throughout his entire outing.

More on the Rangers at: Lone Star Ball More on the Astros at: The Crawfish Boxes

J.A. Happ and Dan Straily were excellent yesterday. Happ (26% WPA) hurled seven innings of one-run ball with his only mistake being a leadoff homer to Chris Young to start the game. From there on, he only allowed two more hits and two walks while striking out six. Straily wasn't as efficient but was able to get one more out than Happ while allowing nine baserunners and five strikeouts (33% WPA). Ryan Cook came in as relief and the tying run crossed the plate on an error. Starting the eighth, Toronto had a 24.9% chance of winning the game since they were down 1-0, but once they scored and tied the game, their win expectancy bounced up to 67.2%, which was short lived. Casey Janssen came into the game and melted down by giving up four runs on four hits and an ill-advised intentional walk (-48% WPA).

Hiroki Kuroda (54% WPA) pitched another gem last night with eight shutout innings that only included four baserunners while striking out seven. But the Yankees nearly blew another game in the ninth. With Mariano Rivera unavailable, Boone Logan came in to close out the game and gave up a leadoff single but bounced back to strikeout Kole Calhoun. Joe Giradi had seen enough though, yanking Logan out of the game in favor of David Robertson. Robertson came into the game and walked Mike Trout and then gave up a double to Josh Hamilton that scored a run. With only a one run cushion and men on second and third, the Yankees chose to intentionally walk Erick Aybar to get to Mark Trumbo. Luckily, it worked out as Robertson was able to bounce back and strike him and Chris Nelson out to preserve the win. Easily, Robertson was thrown into the most intense situation of the day (5.51 pLI) but was able to record a Shutdown despite walking two and allowing a hit.

On the other hand, Garrett Richards (12% WPA) was handed a loss despite only allowing two runs over eight innings. His offense just couldn't back him up as they amassed a terrible -62% WPA. Nelson and Trumbo combined for four strikeouts in eight plate appearances, two of which were in an extremely important, game winning situation in the ninth.

More on the Angels at: Halos Heaven More on the Yankees at: Pinstriped Bible

Cole Hamels (39% WPA) continued his bounceback second half with nine innings of one-run ball to preserve Charlie Manuel's 1,000th win. Quieting one of the hottest offenses in the league, Hamels struck out nine and only allowed seven hits in his compete game. Lowering his FIP to 3.43, we should continue to see his ERA to drop from the 3.65 that it currently sits at as long as he continues to regress towards his career average with runners on base.

Opposing starter Julio Teheran (-12% WPA) pitched pretty well but gave up a deflating three run homer to Cody Asche in the sixth that sank the Braves' win expectancy from 29% to 7.7%. Scott Downs and Luis Ayala were able to keep the game from getting further out of reach but Anthony Varvaro allowed a run in the ninth. It didn't really matter as Hamels was excellent and the Atlanta offense simply couldn't figure him out.

More on the Phillies at: The Good Phight More on the Braves at: Talking Chop 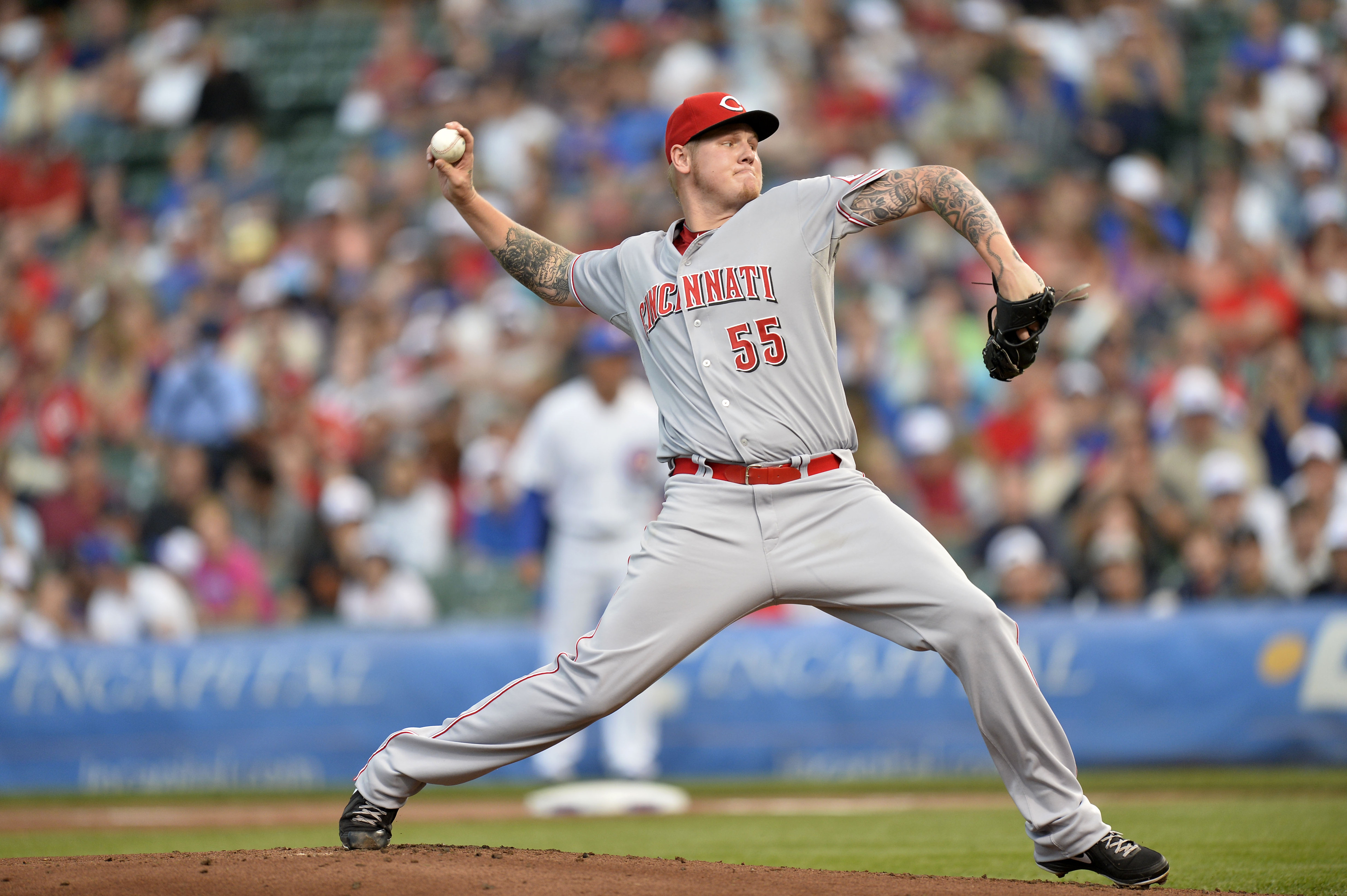 The matchup between the Reds and Cubs also featured another amazing pitching performance. Mat Latos (51% WPA) pitched eight shut out innings while striking out nine and only giving up six hits. Travis Wood (8% WPA) only allowed five baserunners in eight innings but gave up a two-run dinger to Brandon Phillips that proved to be the difference maker. Although Latos had only thrown 94 pitches, Dusty Baker decided to throw in Aroldis Chapman (9% WPA) to handle the ninth. As expected, Chapman struck out the side and recorded his 27th Shutdown. Clearly the Cubs offense couldn't figure out either Latos or Chapman and only Donnie Murphy was able provide any positive winning probability.

More on the Reds at: Red Reporter More on the Cubs at: Bleed Cubbie Blue

Andrew Albers (43% WPA) couldn't complete a complete game shutout in his first start but he was able to do it last night. Only striking out two and allowing two hits, Albers had a 2.60 FIP in a super small sample size. The Twins were able to pounce on Danny Salazar (-13% WPA) quickly and chased him after just four innings. He only allowed three hits but two of them were homers by Brian Dozier and Trevor Plouffe that did all of the damage. They weren't striking out but the Indians just couldn't get any luck with their batted balls as evident by a cruel team BABIP of .074.

More on the Indians at: Let's Go Tribe More on the Twins at: Twinkie Town

Chris Sale (29% WPA) put the White Sox in an early hole by giving up a first inning homerun to the red-hot Miguel Cabrera and a run scoring double to Brayan Pena in second but he quickly settled down thereafter. He gave up nine hits in his complete game while only allowing the two early runs and striking out six. The White Sox were able to rally and come back into the game during the fifth inning thanks to back-to-back-to-back singles from Josh Phegley, Alejandro De Aza and Gordon Beckham. Doug Fister (-19 WPA) couldn't miss many bats and gave up four runs on eight hits and three walks over six innings

More on the Tigers at: Bless You Boys More on the White Sox at: South Side Sox

Tom Koehler (-29% WPA) struggled last night and barely got through five and a third by allowing five runs on nine hits and two walks while only striking out one. Wade Davis (6% WPA) was able to complete six and gave up two runs on six hits and two walks. Justin Maxwell tripled home a run (15.1% WPA) and scored on a single (9.4% WPA) from Chris Getz to put the Royals up 2-0 in the fourth. The Marlins fought back and tied the game in the sixth and it looked like it could be anyone's game until another Kansas City triple (21.8% WPA), this time off the bat of Alcides Escobar, scored another run. From there on out, the Royals were able to pile on a couple more runs off of Koehler and Ryan Webb and conceivably ran away with a win.

More on the Marlins at: Fish Stripes More on the Royals at: Royals Review

There was a complete blowout in Colorado last night. Edinson Volquez (-24% WPA) allowed eight runs on 12 baserunners while only recording just 13 outs. By the end of the second, the Rockies were already up 5-0 and had an 86.8% win expectancy. Jhoulys Chacin (24% WPA) was able to complete eight innings and gave up just seven baserunners and one run while striking out six. As you can imagine, the game never threatened to be close and Chacin didn't really face anything more than low leverage situations (.59 pLI). In the eighth, Colt Hynes gave up six more runs to make this game look even more lopsided than it did before.

More on the Padres at: Gaslamp ball More on the Rockies at: Purple Row

This game was back and forth for most of its duration, even after the Orioles had started to pull away with a 4-2 lead that continued into the seventh. Wade Miley (-10% WPA) threw seven innings but gave up four runs on eight baserunners and Scott Feldman (14%) struck out eight while only allowing one run on four hits and two walks. The Orioles bullpen netted four negative WPA appearances that included three Meltdowns from Troy Patton, Tommy Hunter and Darren O'Day. With a 4-2 lead, Tommy Hunter (-49% WPA) gave up three runs (two earned, one charged to Brian Matusz) on three hits and a walk. Now with the lead, J.J. Putz (10% WPA) came out and got Manny Machado and Adam Jones to fly out to right. Apparently Kirk Gibson didn't trust him to get a third consecutive out and pulled him for Joe Thatcher (-25% WPA), who promptly gave up a homer to Chris Davis that tied the game back up. To start off the eighth, Troy Patton (-17% WPA) gave up a homer to Will Nieves that put Baltimore back into the hole. Continuing the pattern of disappointing relief appearances, Brad Ziegler (-19% WPA) melted down and gave up the tying run in the ninth only for the Diamondbacks to win it on an Adam Eaton walk-off homer against Darren O'Day (-36% WPA).

More on the Orioles at: Camden Chat More on the Diamondbacks at: AZ Snake Pit 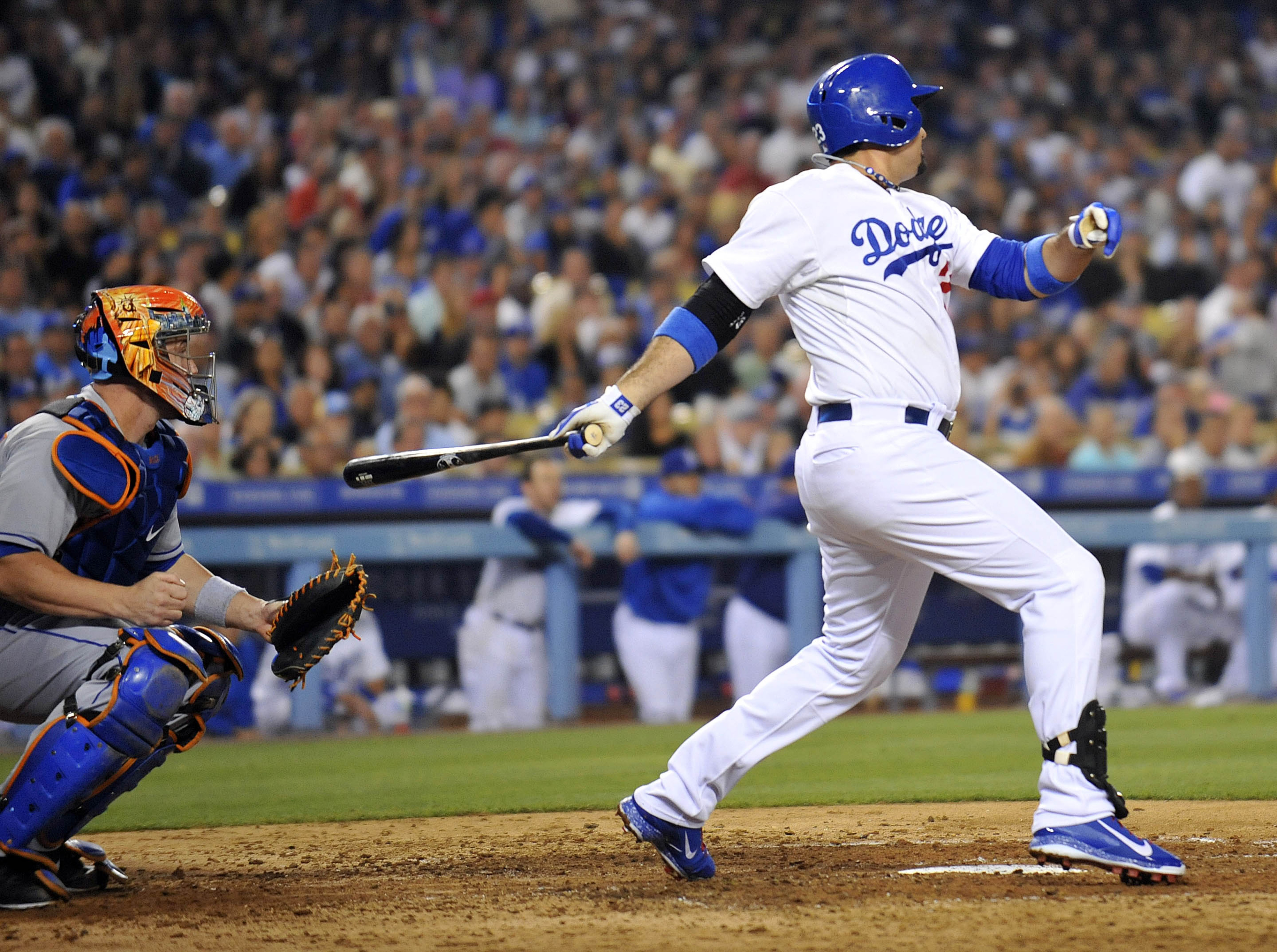 The Mets ran out to a quick 2-0 lead against Ricky Nolasco and the Dodgers last night but blew it in the sixth. Nolasco (-12% WPA) lasted six and a third with two earned runs and nine baserunners while Jenrry Mejia finished six innings but allowed three runs (two earned). An Adrian Gonzalez single that scored Carl Crawford and Mark Ellis thanks to an error on Juan Lagares proved to be the game changing play with a 36.2% swing in win expectancy. With a 3-2 lead, the Dodgers were able to get an insurance run from a Nick Punto homer off Carlos Torres in the seventh. In relief, Paco Rodriguez (14% WPA) and Kenley Jansen (12% WPA) were able to record shutdowns and struck out five of the nine batters they faced.

More on the Mets at: Amazin' Avenue More on the Dodgers at: True Blue LA