Adam Dunn and Carlos Marmol are the epitome of three true outcome players and their history together almost lived up to the hype.

From high school physics, you probably recall something about objects in motion tending to stay in motion unless acted upon by an outside force. It's Newton's First Law -- useful info if you're reading this while taking a physics test or you're just trying to impress your friends. It can also be a useful framework when considering what should happen when a batter faces a pitcher who tends to induce the same type of outcomes for which the batter is known.

You can imagine a world in which Yu Darvish faces Chris Carter several times and Chris Carter strikes out a lot because Darvish is known for strikeouts and Carter is known for them too. In fact, in their three career meetings, Carter has fanned twice*. But what happens when the matchup features two of the most renowned players in the sport at gathering the three truest outcomes in baseball?

What you get is 12 glorious plate appearances between Adam Dunn and Carlos Marmol. Dunn and Marmol were selected because among currently active players who qualified from 2008-2013, they have the highest percentage of plate appearances ending in a strikeout, walk, or home run. Dating back to 2008, Dunn ended a PA 50.9% of the time with one of the three true outcomes and Marmol can make that claim 49.1% of the time as well. The differential of 1.8% isn't nothing, but they're essentially the same for our purposes here.

They are both the leaders at their position and have essentially the same chance of drawing a strikeout, walk, or home run from their proverbial hat of outcomes. Together, they are an object in motion hurdling toward one of the three true outcomes unlike any other. Let's examine their history. First, let's see how they've performed overall since the start of 2008:

Dunn's involved in more home runs and slightly fewer strikeouts, but the walk rates are nearly identical. If they faced each other a bunch of times over and over without learning to out think the other, you'd expect the Three True Outcome Percentage (TTO%) to converge on about 50%.

Well, we're 12 plate appearances in and we're already almost there. After 12 trips, 41.6% of their meetings have ended in one of the three true outcomes.

In their first meeting, Marmol was starting and got Dunn to ground one to the shortstop before walking and striking him out in their second and third confrontations of the day. The remaining matchups came with Marmol going in relief, where he induced a fly out and a pop out in plate appearances four and five.

In the next three we saw a five-pitch walk, seven-pitch strikeout looking, and five-pitch strikeout swinging. Through their first eight meetings, Dunn and Marmol had combined for a TTO% of 62.5. But since July of 2008, they've met four times and haven't given us anything. Dunn finally got his first hit off Marmol in April of 2010, but flied out in his next three tries.

With the help of Texas Leaguers, we can examine those final four chances: 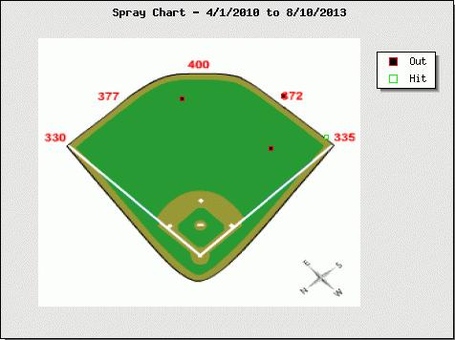 You'll notice the double right down the line and the two obvious fly outs are easy to spot. What you may not see is the other fly out nestled in the 372-foot distance marker in right-center. What happened there?

It was August 25, 2010 and neither Marmol's Cubs or Dunn's Nationals were going anywhere and the outcome of the game was essentially without meaning as far as the standings went. It was the ninth inning and Ryan Zimmerman has just knocked a clean, two-out single to center.

Dunn strode to the plate with his team down four and in need of some late game heroics. With Zimmerman off on the first pitch Dunn fouled back a 96 mph heater from Marmol. On the second pitch, Marmol laid a fastball right down the middle at 95 and Dunn went for it. The crack was deafening and the woman near MASN's field mic thought for sure it was gone. The cameraman sized up the home run shot, but the ball landed harmlessly in Kosuke Fukudome's glove as he stood up against the out of town scoreboard.

This moment was essentially meaningless in the grand scheme of 2010 and the history of baseball in general, but in this small corner of the internet it was heartbreaking to watch. Had Dunn gotten an additional two feet on it or if the wall was a step or two closer, Dunn would have homered. And the 12 Dunn, Marmol matchups would have ended with one of the three true outcomes six times. Which would have been 50%, right on the nose.

If you take Dunn and Marmol's total strikeouts, walks, and home runs since the start of 2008 and divide them into their total plate appearances you get an expected TTO% of 50.3. Almost exactly half of Dunn and Marmol matchup should yield a home run, walk, or strikeout and the world came within a couple of feet of that being true.

The weather was just a bit cooler than average that night in 2010 and those few degrees were likely the difference. Marmol grooved it, Dunn smacked it, and everything nearly fell into place. Often times, we cite small samples for their divergence from expectation but in this case a small sample, batter-pitcher matchup was nearly dead on. Sometimes baseball is crazy, but sometimes it's as predictable as Newton's Laws of Motion.

All statistics courtesy of FanGraphs, Baseball Reference, and Texas Leaguers.